The IFC/World Bank’s Lighting Africa Program issued, at least from my vantage point, a relatively overlooked report earlier this month. Titled Solar Lighting for the Base of the Pyramid – Overview of an Emerging Market, the report found Africa will be the world’s largest market for solar portable lights by 2015. Making up that market, the report estimates, is up to 65 million would-be customers, who could access off-grid lighting over the next five years.

For companies and investors willing to take the risk, they can anticipate a 40-50% compounded annual growth rate in sales volume. Further, less than 1% of this market has actually been tapped, the study estimated.

I was looking over this report on Friday, just a few minutes before I literally walked next door to the University of Michigan’s Ross School of Business where Jacqueline Novogratz, founder and CEO of Acumen Fund, was set to speak. Novogratz was in Ann Arbor as the concluding speaker for Global Entrepreneurship Week events here. During the course of her talk, Novgratz updated several Acumen-funded projects, including D.Light Design, which she noted has reached 1.5 million people this year with its $10 lantern. Novogratz went on to say that D.Light will be unveiling an even less expensive unit soon. No pricing has been listed, but just today D.Light announced the introduction of its second-generation product line of solar LED lanterns and mobile charging units.

Her mention of D.Light left me rethinking the Lighting Africa Program study and what we know about the desire for clean, off grid technologies. We hear about plucky solar startups and try to write about them with some frequency on NextBillion, from Tough Stuff to Solar Sister. Each is aiming to replace the dirty and often dangerous kerosene lamps that are still the illumination mainstay. These entrepreneurs certainly understand that the need and the market potential are immense. But it will remain only potential without investment and investors who are not only willing to take the risk, but are willing to take more time for the rewards than the market typically demands. This is the essence of patient capital, of course.

So I asked Novogratz to assess the acceptance or lack of acceptance for patient capital.

She said Secretary of State Hillary Clinton and USAID Administrator Rajiv Shah are mentioning patient capital frequently, for example. And last week Novogratz was in Zurich talking to investment bankers interested in using it.

“The idea of patient capital is actually starting to permeate into the mainstream institutions,” she said. “How that idea is translated into a codifiable sector is part of the challenge because it can mean so many different things to so many different people … But if you look 35 years later with microfinance, I see a much faster trajectory, given that 10 years ago (patient capital) didn’t exist.” 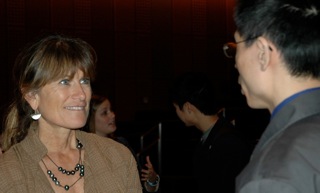