An estimated 780 million people around the world lack access to clean drinking water and 1.3 billion people are still without access to electricity. Twenty-year-old Eden Full, who has been tinkering with solar technology for more than half of her young life, saw these dual challenges and designed a dual-purpose system that uses mechanical water flow to control the rotation of a solar panel to meet them. The SunSaluter, winner of the Mashable-UN Foundation Startups for Social Good Challenge, is a low-cost solar tracker and water filtration system. I spoke with Full, one of the recipients of the 20 Under 20 Thiel Fellowship (a $100,000 grant to skip college and focus on a world-changing idea), about the evolution of the SunSaluter and the growing need for solar energy in East Africa.

Gary Goldman: Congratulations on launching SunSaluter 3.0! Could you walk me through the various stages of development, and how this version differs from the previous one?

Eden Full: SunSaluter started out as a science fair project I did in high school. After finding out that there were applications for solar in the developing world, I geared my project towards social entrepreneurship. It has evolved from the first solar car I built when I was ten, to something I realized was more about providing an integrated solution that could really work for people and change their lives. The various iterations of the SunSaluter are a reflection of our observations with locals and their needs: First, it was just a solar panel tracker, and now it’s even a device (that) provides water in an integrated way. We’re hoping that it can be manufactured, distributed, and maintained locally.

GG: How many SunSaluters have been deployed so far?

EF: Five: two in Kenya, two in Tanzania, and one in Uganda. We have reached 5,000 villagers and learned a lot about how people live their lives in East Africa, as well as how to provide a tool that meets their everyday needs. 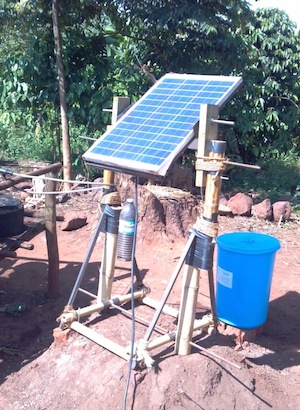 GG: Please explain how your solar panels work, and how you are able to provide clean water in addition to energy?

EF: The system rotates the solar panels to face the sun, which increases their potential efficiency by up to 40 percent. Then, the first step is to pour water into the SunSaluter on one side of the panel at the beginning of the day. A valve is responsible for controlling the flow rate of the water so that it matches the rate at which the sun is moving across the sky. If water is filtered simultaneously, you’re now getting clean water at the same time that the physical imbalance is causing the solar panel to rotate.

GG: This also makes a lot of financial sense, right?

EF: Yes. For a unit cost of less than $50, villagers are able to charge for an additional lantern, an extra battery, as well as the 4 liters of clean water generated.

(Left: A SunSaluter prototype is set up for a pilot test.)

GG: What incentives are you generating within the local communities with this new SunSaluter? How is this profitable for your organization?

EF: We’re still thinking about how to incentivize local communities to use the SunSaluter. The added value is that 40 percent more electricity is cheaper than buying another 40 percent of a solar panel. We hope to manufacture this device at a low enough cost while selling it for slightly above cost of manufacturing to generate revenue and sustain the organization. We’re still fiddling around with revenue models.

GG: What’s next? Have you developed the SunSaluter into a commercial product?

EF: We’re hoping to start a local manufacturing subsidiary early next year and get things rolling. The SunSaluter is in the process of becoming a commercial product: we filed for a provisional patent and are looking for partners and distributors to ensure that this actually goes to market.

GG: How did the real-life experiences you’ve accumulated in the past years help you better understand how to develop a strong product that solves a social issue and has market potential?

EF: When I first came into the villages, I had a lot of preconceived notions about what people would use the electricity for. You need to understand how people cook their food, how water is used, where they get it from… Understanding those details has helped me become a better inventor.

GG: How important is data in preparation for your trips or for needs assessment?

EF: Data is extremely important in preparing for our trip. We are able to use statistics from UgandaInfo in order to determine that, for instance, Uganda is only 9% electrified. We use data to determine if the market size is sufficiently large to justify a need, how to proceed, and how to pitch to different distributors and partners. Without data and statistics, we’d be going in blind.