The BoP Century?: The exciting (or scary) implications of demographics for global health and social enterprise (Bi-weekly Checkup, 7/20/13)

Check out the mind-blowing charts below.

They’re based on statistics from the United Nations Population Division, which tracks demographic data from around the world.

In response to new stats from sub-Saharan Africa, the UN has dramatically revised its projections for what the world’s population will look like by the end of the century. They predict astonishing growth in Africa and other developing countries, with stagnating growth just about everywhere else – including India and China. (The charts come from a fascinating recent article in the Washington Post – well worth a read.) 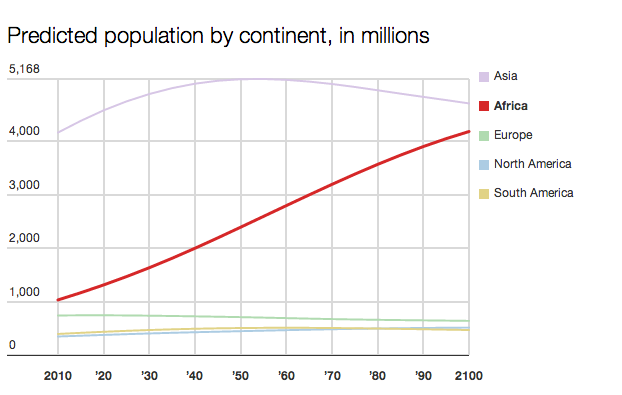 Now for the obligatory caveats – a lot can happen in 90 years. Population could be reduced (or decimated), either in specific regions or globally, by:

The likelihood of each of these world-changing events is open to debate, and there are other, more cheerful possibilities – like population control initiatives or natural reductions in birthrates brought on by increased economic prosperity – that could change these projections dramatically.

But let’s imagine that none of that happens and these predicted growth trajectories actually come to pass. Here are a few possible implications for global health care and social enterprise:

But again, the variables matter. Will poor regions remain poor? Or will population growth be accompanied by a rising tide of economic expansion and better overall health? Will the impact of our current health challenges be reduced by technology and development? Or will today’s illnesses still plague us in 2100 – along with whatever new diseases Mother Nature has in store for us?

In any case, a few things are clear:

Are the world’s changing demographics a reason to celebrate or panic? Either way, it’s likely to be a wild ride.

Here are some posts you may have missed in our last two weeks of global health coverage:

Innovating to improve the health of women and children: T-HOPE researches innovative delivery models in maternal and child health

Beyond the Clinic: A holistic approach to creating community health in Ecuador

Enlisting Quacks in the Battle Against TB: An alarming study from Lepra highlights the need to train and regulate informal providers