The Pyramid Within the Pyramid: Segmenting the BoP Affordable Housing Market

Editor’s Note: NextBillion has launched month-long series on Housing for All in partnership with Ashoka. This special series coincides with two upcoming Ashoka publications on best strategies to achieve Housing for All, Ashoka’s initiatives using its Hybrid Value Chain framework to leverage changes in the affordable housing sector in Brazil, Colombia and India. Please follow the series HERE and Join the discussion with your thoughts and insights.

As practitioners creating solutions at the BoP, we are faced with many challenges. The traditional business models we all grew up with, which have worked well for decades in middle- and upper-level income levels, do not work at the BoP, at least not for long or at scale. It is clear that new frameworks are needed for BoP success.

But is the BoP one very large, uniform market – albeit different from its more affluent cousins? We soon learned that in a country as large, varied and filled with poverty as India, BoP populations varied tremendously, and solutions aimed at them without understanding exactly the level of their assets, needs, preferences and abilities were doomed to fail. The new arrival to a slum and a rickshaw driver living in a slum both are defined as BoP. But the differences between them are as vast as night and day. How can they all be treated the same when it comes to delivering products and services?

When Ashoka launched the Housing for All initiative in India in 2008, the need was clear: The 2001 Government Census of India confirmed the lack of housing at 24.7 million, with 99 percent of gap at the BoP. Many past attempts to close the gap between need and supply had failed miserably. The gap remained, and it was growing larger each year (by 2010, it had reached 26 million).

We investigated, first, our potential partners and clients: Who were the major players in the Indian housing market? What was not working properly in the housing sector value chain (otherwise we would already have seen many more affordable housing projects under way)? Could we innovate solutions to fix the chain where broken? Could we apply different frameworks to overcome the barriers clients faced as they wished to improve their housing conditions?

Who, precisely, needed housing? How much did they actually earn, even if that income went unreported? Did they have assets? Did they have jobs or small businesses, even if in the informal sector? What were they already spending on housing? Could they be assisted to qualify for mortgage or housing loan? Could we help develop loans at rates and with terms they could afford to repay? What did they need to learn or to access to accomplish this?

We used Ashoka’s Hybrid Value Chain (HVC) framework to address where the traditional housing value chain was broken. HVC involves building strong alliances with all the stakeholders in a sector, to co-create solutions that are good for business (increased revenues and market share) and good for citizens (improved, affordable products and services, increased income, and movement from informal to formal market participation). Whatever strategy we arrive at, ultimately it had to rely on market forces to keep it going – so that the solutions we developed could be scaled up and sustained over time without our continued intervention.

We came to a few initial conclusions: One: there were several large, private home building and real estate development companies that were interested in BoP housing, but had not yet found the right way to succeed in it.

Two: there were several microfinance institutions that wanted to branch out beyond their loans for micro-enterprises, and expressed interest in affordable housing as an added product and service for their BoP clients, and to help them attract new ones.

Three: two large, experienced and respected citizen organizations – SAATH and SEWA – worked with over 150,000 BoP citizens and had deep, trusted relationships and knowledge of their communities. Both agreed that the lack of affordable housing was critical and wanted to be part of an HVC alliance. The three sturdy legs of an HVC affordable housing stool were now in place. 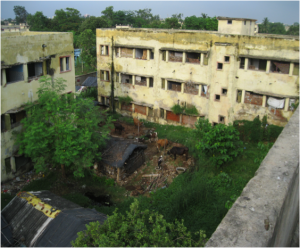 We also explored government’s role in provide affordable housing. We visited several subsidized government housing developments and saw that, in addition to being too few to solve the problem (the government’s ambitious plan to construct 12 million houses by 2014 would address less than 50 percent of the gap), the conditions in them were truly miserable.

There were other government policies – such as subsidies for new apartments or small homes for sale. But real estate agents or the middle class often purchased these properties and either flipped them for profit, or rented them to the poor at inflated prices.

The Pyramid within the BoP: Segmenting and matching solutions to clients

After working closely with our partners in BoP communities, we identified three types of solutions for three groups, based upon their income level, employment and capacity to establish themselves in new, urban environments. We developed a model based largely on household income (see figure 1), and adding indicators such as whether income was occasional and insecure, or steady but informal and undocumented; whether there were savings; family size and health; etc.

Then, we developed categories to help us match products to segments of the BoP. This confirmed our strong conviction: Each of these groups needs different types of housing solutions. 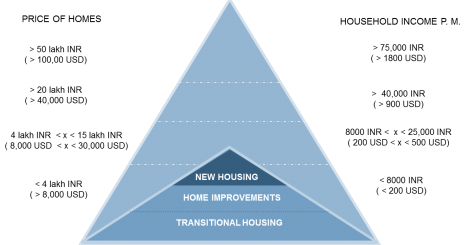 Figure 1: HFA India targets the Top of the BoP with market-based solutions

1. Transitional or Rental Housing for the BBoP: This category – which we call “Bottom of the Base of the Pyramid, or BBoP” includes migrants newly arrived to urban slums with no savings or assets, no jobs and few skills for urban employment options; widows, the handicapped, single parents with several small children, squatters, beggars and occasional day laborers who cannot earn enough to afford to pay for even minimal housing. They earn less than Rs. 5000 (US$100) a month, and are in “Extreme Poverty.” 2010 estimates show the BBoP has approximately 44.5 million households needing affordable housing, or 22 percent of the entire BOP population in India.

As we look at housing provision, it is evident that market based solutions are inappropriate. A subsidy-supported model, either from the government or a charity, is the most plausible solution for those at the BBoP. Specificallyneeded are subsidized transitional housing or rental models of Housing, as long-term ownership for this segment is not possible at present market rates in cities. 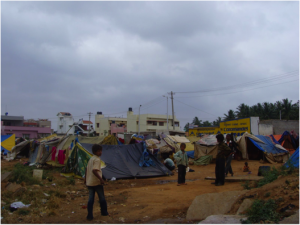 2. Progressive Housing or Home Improvements for the MBoP: We call this segment the Middle of the Base of the Pyramid (MBoP), and it is step up from the BBoP. Here, slum dwellers live in houses ranging from Kutcha (raw) to Pucca (fully finished). They often lack clear title or tenure rights to the land on which their homes are built, resulting from squatting practices, where houses are built illegally. In such cases, it is impossible to use the home as collateral to qualify for a loan to finance a new home. These households earn between Rs. 5000 to Rs. 12000 (US$ 100 to US$ 250) a month. 2010 estimates show the MBoP has 11.7 million households, or 49 percent of India’s BOP population. (Image Credit: Martina Wengle for Ashoka).

For these families, the most appropriate strategy is to help them get land tenure, so they can use their home as collateral for small loans to improve them.

Another is to work with organizations like SEWA and SAATH to help them document their income, and vouch for them as responsible and able to get small home improvement loans, while at the same time helping microfinance companies to develop new loan products for home improvements (a strategy that Ashoka Housing for All is advancing in Brazil and Colombia, for example). Many slums across India have what is called a “No-Eviction Guarantee”- these are prime venues for fostering home improvement. This process involves providing financial planning, starting microsavings accounts, and helping households obtain microloans to improve their dwellings – what is called “Progressive” Housing or “Home Improvements.” 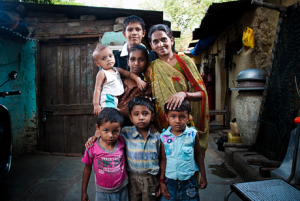 3. New Homes for the TBoP: Those at the Top of the Base of the Pyramid or TBoP — still within the BoP — are households earning between Rs12000 and Rs 25000 (US$250 to US$500) a month, who may have several wage-earners, steady jobs (e.g. rickshaw owners) or stable small businesses (neighborhood grocers). They can save and pay a mortgage for a home. 2010 estimates for theTBoP show 60.5 million households, or 29 percent of India’s BOP population. (Image Credit: Ross Mytton for Ashoka).

So why are they still in the slums? Because although they financially could qualify by income – they live and work in the informal economy, with no pay stubs, tax returns, receipts or other formal ways of proving income and credit-worthiness. If a family cannot prove their income sources they are essentially locked out of the formal banking economy. They rely on local moneylenders, whose high interest rates make it impossible to finance a home over many years. 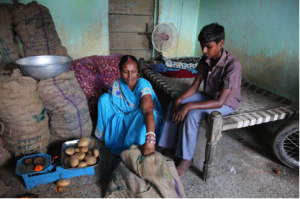 These families live in slums but have improved their housing to a full fledged one or two-floor concrete house, have a television, own a vehicle (typically a two-wheeler) and can afford to send their children to private schools. If new homes were available for less than Rs.10,00,000 (US$20,000), these families could afford a monthly mortgage payment (40 percent of their incomes), which would allow them to own their home outright in 15 years. (Image credit: John Michael Mass for Ashoka).

A fully market-based model can essentially serve TBoP families. In developing the HVC alliance, we have focused on demonstrating that for the TBoP in India, affordable housing can be delivered with quality, matched to customers’ needs, and give developers decades of work and profits. Our thinking was that if we proved our model worked, the market itself would adapt and grow to meet these needs.

Once we decided to focus on providing new home solutions for the TBoP segment, it was time to unleash the power of the HVC and leverage the expertise of each of our stakeholders. We developed new assessment tools, and employed slum dwellers to use them to collect and analyze more accurate information about TBoP housing needs where we worked so builders and innovators could assess their potential profits and design the most appropriate products. (We will put up another blog post shortly describing this innovation, which we hope will help many other housing entrepreneurs in other communities around the world.)

Our market data model has proven very useful to private developers, many of whom relied on inaccurate government data in the past. Now they know in relevant detail the demand, size, design, structure and costs they need to meet to be successful. Their caution has turned into momentum to get shovels in the ground and buildings built!

From our start in Ahmedabad, we are now in 4 more cities, and growing to 15 more, which we estimate will enable companies to build and sell 18,000 homes by 2015 (and financial institutions to gain 18,000 new clients and earn interest from their loans).

Three learnings are clear from our work thus far:

(1) Identifying and segmenting the BoP when designing appropriate housing solutions is critical to sustainable success;

(2) Good financing models are essential for the those in the MBoP and the TBoP (together accounting for 78 percent of the total BoP population); and

(3) New frameworks such as HVC, which include the citizen sector in collaboration with for-profit corporations, are how we will come to close the affordable housing deficit in India.