The World We Want: Business development will play a much larger role in the future Millennium Development Goals

As we near 2015, the world needs to remain focused on securing as much progress as possible on the current set of Millennium Development Goals (MDGs). At the same time, discussions have already begun on the goals and targets that could build on and succeed the MDGs.

On Sept. 25, UNDP joined forces with Business Fights Poverty, the Business Call to Action, the Overseas Development Institute and the UN Global Compact to explore, from a business perspective, what a future development framework might look like. The event video, audio and summary report are available here.

Participants at the event advised that any development framework for post-2015 will need to take into account how the context for development has changed since the MDGs were forged back in 2000 – both in terms of the geo-political, economic and social landscape, and in the way we think about development.

One fundamental change since 2000 is the deeper understanding that we now have within the development community of the critical role of the private sector. UNDP recognizes that achieving the MDGs depends on vibrant and sustained economic growth driven by markets and private enterprises that create decent jobs, provide goods and services for poor people, and generate tax revenues to finance essential social and economic infrastructure. Through our support for initiatives such as the Business Call to Action, the African Facility for Inclusive Markets, and Growing Inclusive Markets, we are particularly interested in facilitating business models that extend choice and opportunities for poor people – as producers, distributors, consumers, and wage earners.

At the same time, it is important to recognize that the bulk of the private sector consists of small-scale domestic entrepreneurs and farmers, and that the private sector provides the context in which poor people live their lives. There is a greater awareness now that poor people themselves see getting a job or growing a business as a key exit strategy from poverty. It will be critically important that the vision for the world we want to live in – and any ensuing goals and targets – be informed by this reality.

For many companies, including signatories to the Business Call to Action, the MDGs have provided a useful framework for action – a point brought out strongly in a number of studies including by the International Business Leaders Forum and Business Action for Africa. At the same, it is widely recognized that more could have been done in the early stages to engage business in the conversation about what the MDGs should have included, and the role of business in their delivery. As was highlighted at the New York event, as we start to think about a new development framework, the key question is now not about whether business has a role, but how best to harness business in the development and delivery of new goals.

At the event, a series of interesting examples were highlighted, including 24 new commitments by companies under the Business Call to Action. Barefoot Power has committed to extend access to high-quality, energy-efficient, affordable LED lamps to an additional 10 million customers in off-grid communities in Ghana, Senegal, Nigeria and India by 2015. Itaú Unibanco has committed to offer financial services to an additional 100,000 micro-entrepreneurs with $350 million in microcredit product in Brazil by 2016. ITOCHU Corporation, from Japan, has committed to enable 6,000 smallholder farmers to improve their profit margin and rid 30,000 acres from harmful agricultural chemicals by 2015. Nokia has pledged to empower 1,000 women in Nigeria through Nokia Life tool technology by 2013.

As we launch the discussions on what will replace the MDGs, it is important that we encourage business to engage actively, alongside civil society and governments. A number of processes are getting under way to ensure an inclusive approach, defined by national and local priorities.

The United Nations Development Group (UNDG), chaired by Helen Clark, is coordinating a broad consultation process to listen to the views of people and groups around the world. Meetings and other activities are being held in more than 50 countries* between now and February 2013, alongside thematic meetings covering a range of topics:

Next month a web portal will be launched – www.worldwewant2015.org – to encourage a ‘global conversation’ on the future development agenda.The evidence and perspectives generated through the national and thematic consultations will be placed on the site, together with additional tools for contributing perspectives such as an options survey. These will be synthesized to feed into the work of the High Level Panel that the UN SG will convene in Summer 2012, to the Open Working Group on Sustainable Development Goals, and also to the special event that UN member states have asked the President of the General Assembly to convene in September 2013.

A High-level Panel was appointed by the UN Secretary-General, Ban Ki-moon, to advise him on the post-2015 process, and met for the first time on 25 September at the UN headquarters in New York. The High Level Panel is co-chaired by the President of Indonesia, Susilo Bambang Yudhoyono, the President of Liberia, Ellen Johnson Sirleaf, and the Prime Minister of the UK, David Cameron. Two business representatives sit on the panel: Paul Polman, the CEO of Unilever, and Betty Maina, the CEO of Kenya’s Association of Manufacturers. The Terms of Reference and membership of the High Level Panel can he found here. The High-Level Panel will next meet in London on 1-2 November, and will be conducting a series of consultations. The Panel will deliver its report on 31 May 2013. The High Level Panel will also consult with the Open Working Group (outlined below).

An intergovernmental Open Working Group on Sustainable Development Goals, originally proposed by the Governments of Columbia, Guatemala and Peru, was an outcome of the UN conference on sustainable development, ‘Rio+20’, held in Brazil, in June. The Open Working Group will be made up of 30 government representatives drawn from all regions, and will cover all dimensions of sustainable development – economic, social and environmental. It is expected to submit a proposal for a Sustainable Development Goals framework to the UN General Assembly in the 68th session of the General Assembly (September 2013 – September 2014).

The UN Secretary General recently launched a new independent global network of research centres, universities and technical institutions to help find solutions for some of the world’s most pressing environmental, social and economic problems. The Sustainable Development Solutions Network, led by Professor Jeffrey Sachs, Director of the Earth Institute and Special Advisor to the Secretary-General on the MDGs, will work with stakeholders including business, civil society, UN agencies and other international organizations to identify and share the best pathways to achieve sustainable development. 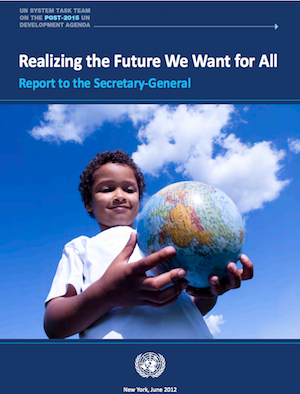 A key message from the UN’s first report on the Post-2015 agenda,Realizing the Future We Want for All – is that the new framework must set out a bold vision for the future that rests on the core values of human rights, equality and sustainability. It must build on one of the key strengths of the MDGs – an agenda based on concrete end goals and targets, but reorganized along four key dimensions: (1) inclusive social development; (2) inclusive economic development; (3) environmental sustainability; and (4) peace and security.

The new framework will be shaped by the various processes described above, and ultimately must avoid being a prescriptive blueprint, but rather a guiding vision and set of principles that allow space for national policy design and adaptation to local settings. The post-2015 UN development agenda should be conceived as a truly global agenda with shared responsibilities for all countries: a truly global partnership for development. It is important that business be part of this conversation, as ultimately they will be critical to its delivery.