The Zambia Journals, Part 1: “From Buckets to Pumps”

Ryan is a business professional with Medtronic, the world’s leading medical technology company.? He earned a bachelor’s degree from Brigham Young University and an MBA from the University of Michigan’s Ross School of Business.??He writes about sustainable, scalable solutions to end global poverty on his blog Riches For Good and is actively pursuing his goal to help 1 million people out of poverty during his lifetime.By Ryan Gunderson

Mr. Hakawale is a farmer who lives along the banks of the Magoye River with his family in rural Zambia.? Up until 1997, he cultivated a small plot of land, watering his crops by hand with a bucket.? When I visited Mr. Hakawale in October 2008 as a guest on IDE’s annual board trip, he gave us all a great history lesson of irrigation on his farm, starting by holding up a rusted out metal bucket he used years ago. 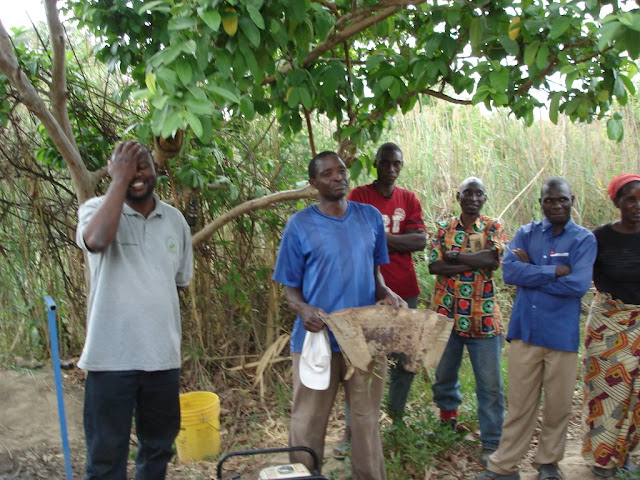 In 1997, Mr. Hakawale met a representative of IDE (short for International Development Enterprises), a Colorado-based non-profit that has been helping rural farmers in the developing world to increase their incomes since the 1980s.? Shortly after meeting the IDE representative, Mr. Hakawale purchased his first crude pump, pictured below. 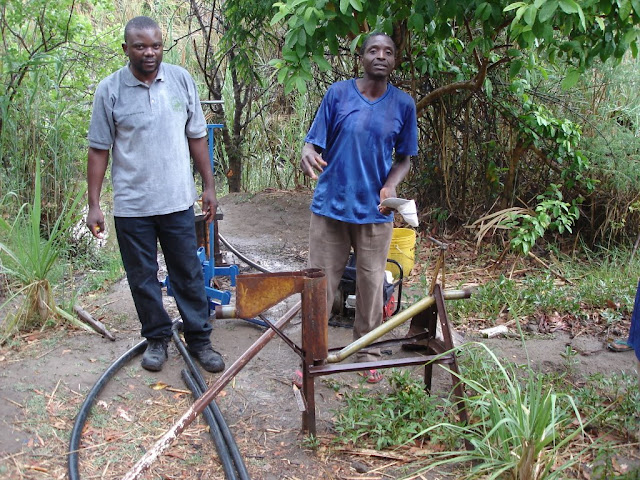 The pump is now missing a number of parts, but even when Mr. Hakawale first purchased the pump, it had numerous problems.? He worked with IDE engineers to modify the product somewhat, but it still had issues.? Nevertheless, that first pump helped him improve his output such that he was able to purchase a second-generation treadle pump in 2003 to replace the first.? In 2007, he purchased a petrol pump, and in 2008, he purchased a third-generation treadle pump, the KickStart MoneyMaker, which is perceived to be the premium treadle pump in Zambia and is priced accordingly.? (The least expensive option in Zambia is a locally-made treadle pump that starts around $100.? The MoneyMaker is nearly double that.? And an Indian-made import manufactured by Bhinge Brothers is priced somewhere in the middle).?

Mr. Hakawale actually prefers the MoneyMaker to his petrol pump, because it does not require expensive fuel and is easier to maintain.? Mr. Hakawale’s brother, Kennedy, is pictured below on a Zambian-manufactured second-generation treadle pump.? A petrol pump and the KickStart MoneyMaker are also shown in the picture. 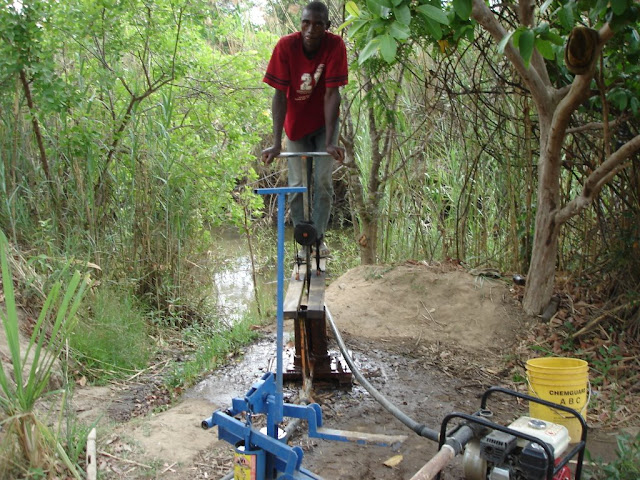 Mr. Hakawale has ten children, three of whom have graduated from high school.? One of those children is currently attending college, and another opened two grocery stores to sell Mr. Hakawale’s produce.? Because of his pumps and IDE’s training, Mr. Hakawale managed to buy a second-hand vehicle last year, and he plans to build an eight-room house for his large family.? He now farms six hectares and plans to grow to 10 hectares over time.? He says all 25 farmers in his area have purchased pumps, but microfinance would still help many of the other farmers in the area, as would a weir and continued training.? He also believes the market IDE set up in Pemba will be helpful to local farmers.

Though impressive, Mr. Hakawale’s story is not an isolated one.? I traveled for four days in rural Zambia, escorted by IDE staffers and field representatives, meeting dozens of farmers in the process.? Each was in a different stage, but they shared common themes.? For example, they all started watering by bucket.? Some of them continue to water by bucket today, as they try to save up to purchase a pump or as they wait for a microloan of $100 to $200 to get them started.?

After their output increases, they sell their surplus fruits and vegetables at a profit, giving them money to purchase previously unattainable goods such as school supplies for their children, a wider variety of foods for their diet, and less cramped living accommodations for their large families.? In some cases, they purchase cell phones so they can call the market to ensure prices are fair before arranging for expensive and time-consuming transportation. A generator or solar panel might be added to provide lighting, radio, TV, and cell phone charging. In exceptional cases, such as Mr. Hakawale’s, they can even afford a vehicle.

I saw with my own eyes that moving from buckets to pumps changes the lives of farmers and their families.? For as little as $100, farmers can purchase a basic human-powered pump such as the treadle pumps pictured and discussed above.? Lack of access to credit is a key barrier to broader adoption of pumps, but those who can obtain a pump via microcredit are typically able to increase their productivity such that that can pay off their loans within one year by selling their surplus fruits and vegetables.?

As I consider ways to invest my own time and money to help others provide for life’s necessities, extending credit for the purchase of a pump appears to provide a high social return on my investment.