Toilet To Tap: Solving the Global Water Crisis With Wastewater

Water scarcity is a problem felt around the world, with an estimated 663 million people lacking access to safe water. It is thought that half of the global population will reside in water-stressed areas by 2025.

Several challenges stand in the way of ensuring that everyone has the right to safe and sufficient drinking water, including population growth, climate change, urbanization and demographic changes.

With water scarcity becoming a growing issue for countries all over the world, it may be time to look for alternative solutions. Luckily, a few companies have been brave enough to turn to an unpopular resource that may just provide the solution.

Turning wastewater into pure and perfectly safe drinking water not only makes a positive contribution to ending the world’s water crisis, but it also offers businesses a chance to turn a profit. 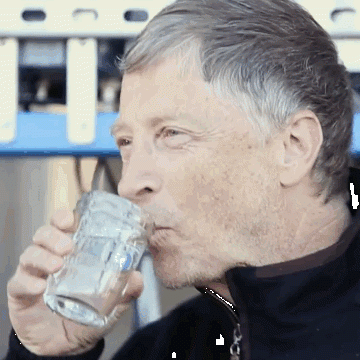 While conventional methods, such as rainwater harvesting, can meet some demand, these are no longer sufficient to meet growing needs. The re-use of wastewater is becoming an increasingly important strategy for solving the world’s water crisis. Of course, not everyone agrees with these methods, and it has faced strong opposition in the past.

Bill Gates famously helped raise awareness for the issue by drinking a glass of reused wastewater made using the OmniProcessor, designed and built by Janicki Bioenergy (see photo on right). The low-cost waste treatment plant has not only the capability to produce safe drinking water from wastewater but also enough energy to burn the next batch of waste. It combines an incinerator, a steam power plant and a water filtration system into a valuable piece of machinery.

The development of the plant was funded by the Gates Foundation, which has a whole division dedicated to water, sanitation and hygiene. Its goal is to support the development of new technologies and advancement of markets for new products and services in sanitation, to provide the world’s population with access to sustainable sanitation services.

The key, as Peter Janicki found, is to make sewage valuable. By turning waste into a valuable commodity using profitable treatment plants, you give people an incentive to spread these plants to every corner of the earth. The idea is not an unrealistic one; the wastewater treatment and monitoring solutions industry as a whole has previously generated average operating profits of 12.9 percent.

Janicki Bioenergy is not the only company to have developed a treatment plant that makes the most of waste. Remondis is one of  several companies worldwide paving the way for what many regard as the wastewater treatment facility of the future, one that can derive not only clean water from sewage, but also energy and valuable minerals. With its patented TetraPhos process, which uses phosphoric acid, the company has uncovered an economical way to recover high-quality phosphate on an industrial scale.

Then there’s the Point Loma Wastewater Treatment Plant in San Diego, where waste goes through several stages of treatment before it is pure enough to be used as drinking water. Advanced primary treatment separates out 80 percent of solids, so the water is sufficiently clean to discharge into the ocean, the second stage uses bacteria to get rid of organic solids, and the tertiary stage removes any remaining solids, salt, and disinfects it with chlorine. You can use this water for industry or irrigation purposes.

It must then undergo microfiltration and spend time in a reservoir before reverse osmosis removes bacteria, viruses, pharmaceuticals, and protozoa. This is before being further disinfected and purified by natural processes. It is only then that it is deemed suitable for drinking water.

There are several technologies currently used to recycle water, and these vary depending on what you will utilize the water for, and thus how pure it needs to be.

It’s taken some time to change attitudes enough to get to this point. After all, Windhoek Goreangab, a water reclamation plant based in Namibia, has been turning raw sewage back into drinking water for nearly 50 years. While it will take more time still for many of these companies worldwide to become fully commercialized, it’s clear to see that progress is being made.

Developed countries, such as the United States and specifically states like California, have experienced significant drought in recent years. Investments in facilities that make the most of wastewater will no doubt advance the technology – and show this can be a profitable and desirable business, both locally and globally.

Bob Gorman is a freelance writer from Melbourne.