How many adults in the world have a bank account? How do people save, borrow, and manage financial risk? How is mobile money shaking up the financial inclusion world? These are the sorts of questions we can answer with the newly released 2014 Global Findex. The database covers 800 indicators and draws from survey data covering almost 150,000 people in 143 economies. We present 10 takeaways we think you should know:

1. Account ownership is increasing almost everywhere in the world.

700 million adults (above 15 years old) worldwide became account holders between 2011 and 2014 (accounting for a population growth of 200 million). Worldwide, account ownership increased to 62 percent in 2014, up from 51 percent three years ago (including one percent of adults that use only a mobile money account and do not have an account at a financial institution). In high-income OECD economies, account ownership is almost universal, at 94 percent; in developing economies, 54 percent of adults have an account.

2. The gap between rich and poor in account ownership is shrinking – but still persists.

In every region, the number of women with an account has increased compared to 2011. Yet the gender gap hasn’t budged. In developing countries, 59 percent of men have an account—compared to 50 percent of women. The gap in account ownership between men and women is unchanged from 2011. That being said, the extent of the gender gap does vary across regions; from four percentage points in East Asia and the Pacific up to 18 percentage points in South Asia.

6. Two billion adults are still unbanked – most in East and South Asia (including India, China and the Pacific).

Thanks in no small part to new technologies, bold government reforms, and ambitious business models, the number of unbanked adults has dropped from 2.5 billion in 2011. 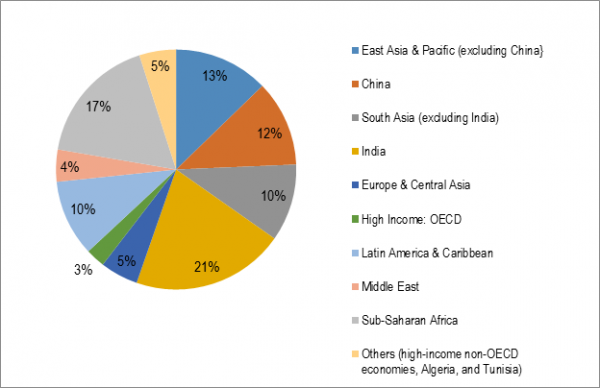 In addition to account ownership, the 2014 Global Findex measures the ways people use their accounts to make and receive payments. For example, in developing countries, 56 percent of adults make utility payments – but almost 90 percent use cash to do so.

8. Hundreds of millions of people could join the formal financial system if governments and businesses made payments into accounts instead of in cash.

9. In developing economies, most people who save money don’t use an account to do so.

In high-income OECD countries, about 70 percent of savers keep their savings at a bank or another financial institution, compared to only about 40 percent of savers in developing economies. A common alternative in developing economies is to save using a person outside the family or a semi-formal savings club, including rotating savings and credit associations (ROSCAs). ROSCAs operate by pooling weekly member deposits, which are generally kept in some community member’s home, and disbursing the entire sum to a different member each week. Such practices are especially common in Sub-Saharan Africa, where 40 percent of savers use semi-formal methods. About 46 percent of savers exclusively use other ways of saving – such as stuffing cash under the mattress, or saving in the form of jewelry, livestock, or real estate.

10. Almost 75 percent of adults in developing countries report they could come up with money for an emergency within a month.

The 2014 Global Findex tries to better understand how people around the world would respond to unexpected expenses equaling about one-twentieth of per capita income in their country [$2,600 in the U.S.]. About 1.2 billion adults (28 percent of adults) in developing countries report they would use their savings in case of an emergency. Yet 56 percent of these adults do not save at a financial institution. Keeping these emergency reserves in cash presents a real risk that the money won’t be there when needed.

Editor’s note: This post was originally published on CGAP’s blog. It is cross-posted with permission.