Solar technology-focused social enterprises in Africa and Asia have utilized numerous creative marketing and PR strategies to share their products and solutions with off-grid communities in dire need of light. From traditional print campaigns to traveling workshops and microfinance-led information sessions, the workday of a “Solar Salesman” is usually filled with hours on the phone, hundreds of e-mails/texts and countless in-person meetings with new partners or customers who desperately need their technologies.

Having spent the last five weeks with the sales team at Hybrid Social Solutions Inc. (HSSi), the social enterprise distribution arm of SunTransfer’s solar products in the Philippines, I have personally experienced the intense travel and time demands required to spread the word and grow this young company. Even a quick three-day trip to Mindoro, an island only a few hundred miles south of Manila, required multiple hours by car, ferry, jeepney, tricycle, and moto. Now consider that the Philippines is composed of over 7,000 islands in an archipelago that is roughly 1,100 miles long and almost 700 miles wide. With over 20 million Filipinos living in isolated communities without electricity, the need is certainly there; but logistically how can a young social enterprise reach these people in a cost-effective manner? Ask Jim Ayala and his team.

Jaime “Jim” Ayala is the former President and CEO of Ayala Land (a Philippines-based real estate corporation) and new chairman of the Solar Energy Foundation Philippines (the local arm of international non-profit Stiftung Solarenergie. A native of the Philippines but educated in the U.S., Jim has an in-depth understanding of local community needs and is using all of his Ayala, McKinsey, Harvard Business School and Princeton connections to make a difference. In less than a year his newly formed Board of Directors, which includes numerous prominent Filipino business people and several former energy secretaries, has made impressive inroads towards addressing rural electrification in the Philippines.

Along with founder Dr. Harold Schützeichel, Jim moved SunTransfer’s manufacturing HQ to Hong Kong to ensure cutting-edge R&D and lower production costs. Then, Jim set up HSSi as a separate for-profit social enterprise based in Manila that works with local microfinance/NGO/Coop partners to distribute SunTransfer’s products and facilitate training and maintenance in the local communities. Finally, just a few weeks ago, Jim and his team formally launched the Solar Energy Foundation Philippines to support SunTransfer and HSSi with fundraising efforts and to help identify like-minded players in the Filipino political and business realms. It has been a flurry of activity, all geared toward local implementation of the innovative practices Jim and his team read about and saw in countries like Ethiopia and Bangladesh. 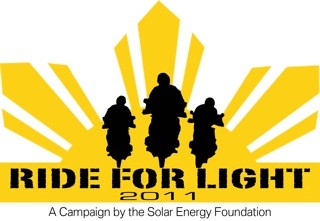 Even though these are significant advancements, the challenge remains: With the unique geographic layout of the Philippines, how can every community possibly be reached? Enter the “Ride for Light 2011″, the first major undertaking of the SEF Philippines. Kicking off on Saturday, April 16 and lasting 19 days in total, this ride will witness three “Light Riders” traveling over 6,600 km across the Philippines archipelago on motorcycle to spread the word and share SunTransfer products with off-grid communities.

During the journey, each rider will be updating a personal blog with pictures, videos and personal narrative. For each major stop, an event will be hosted by a local microfinance/NGO/Coop partner during which the lanterns will be shared with select community members who are then encouraged to rent them out at a small fee. This will introduce over 40 new communities to the appeal of solar technology while providing a new source of income for off-grid families. By working with local partners, SEF will ensure that there is appropriate training, support and maintenance for the lanterns after the “Ride for Light” has concluded. Additionally, through the purchase of four bio-char stickers the entire ride will be carbon negative.

The “Ride for Light” is only the first such national campaign that Jim and his team are organizing with plans for an upcoming “Sail for Light” and “Hike for Light” already in the works. The unique approach taken by Jim, the Solar Energy Foundation Philippines, and his “Ride for Light” team should serve as a creative example of a growing solar-focused social enterprise doing whatever it takes to make sure its products are reaching those who need them the most.