A Profit-Driven Approach to Affordable Education: A Review of HippoCampus Learning Centers

Government schools across India are haunted with serious issues. Teachers are absent 25 percent of days and teaching less than 55 percent of the time. This contributes to the low enrollment rates across the country, standing at a mere 37 percent of 361 million school-going aged children. Parents have become disillusioned with government schools, and the 70 percent drop-out rates are augmented by the lack of quality affordable education.

Studies have shown that grade 7 students in villages typically have the ability to read and write at the grade 4 level. And with poor infrastructure and often poorly trained teachers, the demand for private education continues to grow. Families across India are now spending 5 percent of their incomes on education, which is growing at a CAGR of 8.6 percent, faster than all other house-hold consumption (3 percent).

Private schools have started to bridge this gap. In 2003 they accounted for 23 percent of total enrollment, today 30 percent. However, today’s 250,000 private schools are still not able to meet demand, since even the poorest often prefer to send their children to affordable private schools. With the availability and increase in infrastructure of quality affordable schools, enrollment rates are expected to rise.

The problems of rural, government-managed schools throughout India are well known. However, what still proves illusive is a mechanism to help poor families to send their children to affordable private schools.

In 2011, Grameen Koota and HippoCampus Learning Centers teamed up to address this through a plan that minimized fixed costs per student rural villages in India. Grameen Koota is the microfinance arm of Grameen Financial Services, and provides a variety of financial and non-financial services to rural and semi-urban communities in Southern India, including microfinance loans, MSME loans, enterprise skill development services, business development services, financial literacy trainings and basic health and nutrition education.

HippoCampus Learning Centers addresses this issue through three programs for pre-school, primary and high school children. The pre-school program provides a strong base to children through quality affordable education, and the primary and high school programs are designed as after-school learning initiatives to strengthen children’s grasp of key concepts that they learn in their classrooms.

“There is a significant need and demand for quality and affordable private education, especially in rural areas across India. We recognized that we were well positioned to leverage our microfinance distribution network to expand services beyond credit, and decided to pilot 18 education centers in rural Karnataka (near Bangalore, India) in 2011.”

Grameen Koota’s field staff identified villages with low access to quality affordable education, and with adequate households to meet enrolment targets. They partnered with Hippocampus (Bangalore, India) and the Swami Vivekananda Youth Movement (Mysore, India) to leverage technology and low-cost materials to drive down costs of offering such a service, and to come up with a financially viable business plan. Within the first month and a half, more than 600 children enrolled across the three programs in 18 centers. 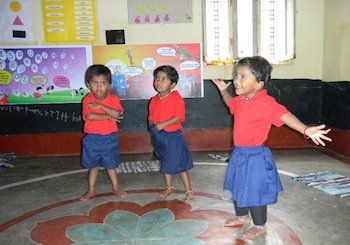 The pilot showcased that quality education can be offered for as low as $2.50 per month, by using technology, video based coaching and low cost education materials. The total cost of establishing each center was $1,350, and the yearly running cost for each center is $3,000. The fee revenue from 18 centers in the first year at 75 percent capacity is expected to be $48,000 (expected to reach $65,000 in the second year), while the variable costs for all eighteen center per year is $54000, reflecting an operating loss of $6000 in the first year. Grameen Koota believes subsequent centers could break even within a shorter timeframe.

The team also noticed that while marketing campaigns involving staff speeches, posters, banners fliers, boards etc. did bear fruit, a large percentage of rural households adopted a ‘wait and watch’ approach, preferring to observe education outcomes through the word-of-mouth channels. Enrollment in the second year is expected to pick up pace, once the quality of education at low price points can be demonstrated to local communities.

Rolling such an ambitious pilot also came with its own set of challenges. From a viability perspective, the team found it imperative to select villages that have the optimum number of households (in their model – 750 households), who must be capable of paying school fees. Moreover, cultural norms must allow children from different castes to participate in the same program in these villages, and to study together. They also faced several challenges such as competition with government Anganwadi workers (who yield significant political influences in villages), low-availability of quality teachers and training of these teachers, and matching center rollouts with school enrollment cycles. While these challenges led to fewer than 50 percent of forecasted enrollments, learnings from this pilot are expected to yield higher enrollments than in 2012.