At last week’s United Nations Social Innovation Summit in New York, all manner of change agents – from social entrepreneurs, to philanthropists, industry titans, impact investors and celebrities stretched the confines of a term that, admittedly, gets thrown around haphazardly and can mean different things to different people. What exactly is “social innovation?”

The UN Social Innovation Summit featured a broad array of initiatives including promising technological innovations, from those aimed at serving BoP populations to technologies aimed at improving quality-of-life for patients suffering from ALS (Lou Gerhig’s) and other degenerative diseases. There were instances of technology innovations and platforms being re-deployed in new ways, including One Laptop Per Child’s recent experiment to drop tablets in rural villages to ascertain if young children can develop reading skills without a teacher or literate adult’s active presence. See earlier article on OLPC for more information about this initiative.

The Summit also brought us working prototypes such as World Haus’ $2000 house with interlocking brick technology, intended for piloting in rural India. (See a NextBillion post on the prototype here). It profiled new types of collaborations for health care delivery and a cadre of youth-led organizations making dents in social problems that have eluded resolution for generations. There was much to marvel at, and there was also a sense of emergent themes around what “social” and “innovation” put together mean.

Practically every social innovation highlighted featured a technological innovation, platform or offering. The Humanitarian Cloud initiative, formally launched at the Summit, allows non-profit organizations to share hardware, applications, services and IT support using the power of cloud computing on a “community cloud” built by VMware. While initial services offered to NGOs and non-profits are fairly basic (disaster recovery, virtual servers, virtual storage and e-mail archiving) the eventual goal is more sophisticated shared services and applications to seed greater efficiency and better use of donor funds, both within organizations and for the development sector at large.

As Doug Smith, vice president of Global Partner Strategy & Operations of VMware put it, the idea is to let social innovators do what they do best and “ free up dollars from running to building”- that is from running current infrastructure (with non-programmatic dollars which are difficult to come by for NGOs and non-profits) to building value and advancing strategic and mission focused initiatives.

Think about the logistical time and costs savings such a solution could represent if implemented at scale. Imagine one hypothetical NGO with field operations, and their tussle with technology; from procuring, delivery, taxation, customs, logistics, compatibility, power supplies, temperature control and disaster mitigation. Now imagine hundreds of such NGOs offloading these head-aches to dedicated providers over the coming years.

Explained William Brindley, CEO of NetHope, an implementing partner in the Humanitarian Cloud:“We are talking about a technology approach to allow a development sector organization’s front, middle and back offices to work more effectively… We’re asking how can we use technology in a smart way, through the cloud and mobile, and create an ecosystem to enable organizations to be much more effective, powerful and reach more people better and faster.”

Another recurring theme of the social innovations featured at the UN Summit, is that of the value of new partnerships and collaboration for social change. USAID Chief Innovation Officer Maura O’Neill spoke of the agency’s collective experience with more than a 1,000 partnerships. “Failure is a necessary part of discovery. It’s important to fail fast and have corrections to the course and we are trying to get better at that.”

The Humanitarian Cloud initiative mentioned earlier represents a hefty attempt at collaboration among major players, and is supported by HP, Commvault, VMware, Xerox, Microsoft, Cisco and others. Its implementing partner, NetHope, is itself representative of more than 35 NGOs operating in over 180 countries. While working with tech giants to innovate and market the Humanitarian Cloud for backend shared services, NetHope is also turning its attention to enabling the activities and missions of NGOs. Again, in collaboration with USAID, Microsoft, HP and others, it is building a front portal for NGO apps.“ A lot of grassroots apps are being developed – everything from healthcare apps, to education, to social gaming –and you will be able to put them up, crowd source them, access them and download them, said Brindley, CEO of Nethope.” (Above: Secretary-General Ban Ki-moon delivers a video message to the Social Innovation Summit 2012: “Business Innovation Meets Social Transformation”, hosted at UN Headquarters).

One Part RE- Sourcing

Word play intended, “RE-Sourcing” is two pronged and appears to be a critical element in social innovation. RE-Sourcing is on the one hand, reevaluating supply chain sourcing practices and moving towards the more thoughtful and ethical sourcing of raw materials in major industries, a practice pioneered by companies like Seventh Generation and advanced incrementally by other industry leaders. For example, Michael Jacobson, Intel’s director of Social Responsibility (pictured below), spoke about the company’s commitment to sell a chip free of all conflict minerals by the end of 2013. 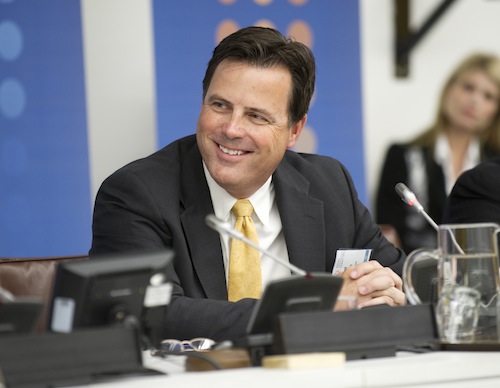 However, the RE-Sourcing I’m referring to here is also the creative re-mobilization of existing or latent resources (i.e. stakeholders, capital, underutilized local know-how or labor) in ways that generate better social and financial returns. The White House Office of Social Innovation Director Jonathan Greenblatt spoke of the office’s dedicated efforts to integrate veterans into social change and other work streams and accelerate their ability to use their skills and talents. “I don’t think you can you can find courage at scale anywhere, like you can with our veterans.” Similar examples of reorganizing resources and stakeholders leading to more promising outcomes were a pronounced theme at this year’s UN Social Innovation Summit.

Can Social Innovation be Formulaic?

Can social innovation be as simple as one part tech, one part collaboration, and one part creative re-sourcing? I would hope not. The truth is we know more about what social innovation isn’t than what it is. It is not the domain of any one sector, not the product of any one organizational structure, nor is it the result of tried and true methods. The variety of initiatives presented at the UN Social Innovation Summit amply illustrated these truths, and the fact that “social innovation” is slowly but surely innovating its own parameters.