Before she passed on, the Nobel Laureate Wangari Maathai left an enduring legacy. The Green Belt Movement (GBM), a grassroots organisation she founded to eradicate poverty through environmental conservation, reached a significant milestone: planting over 50 million trees in Africa.

But in spite of that incredible achievement, her life’s work was more about human regeneration. She dreamed of a society shaped by social values, investing in and empowering its citizens to foster collective decision-making that builds sustainable livelihoods. That vision and the impact of the work that followed, consciously or not, played a vital role in unveiling new models of social investment. It gave farmers a great opportunity to diversify their income sources and expand existing economic activities. Indeed, it championed new ways to achieve community development.

The birth of the social enterprise movement in Africa, in my view, was driven by the need to invest in businesses, which in turn focused on transforming local communities. GBM’s achievements were noted for their ability to advance conservation, people and ideas that had the potential to change our world. New initiatives were inspired to mobilise capital to create opportunities for social progress. Up until then, most businesses had been unable to create value for shareholders as well as society. Investors frowned upon organisations that entertained the idea of integrating social and financial outcomes. Although a hybrid model presented new prospects, initially such noble ideals seemed unattainable and impractical.

The additional result of GBM was a new generation of young people who were empowered to learn more about social entrepreneurship; how to deal with challenging issues in their environments, and what contributions they could make to effect positive change. Many new mentor programs with experienced professionals effectively engaged and inspired them. As an example, a concerted climate change initiative reinforced the understanding and capacity for the youth to take integrated action through robust community engagement, as well as invest in agroforestry. It provided the dual benefits of environmental conservation and income generation. The idea that one had a stake in the implementation of practical solutions planted an indelible seed. For some, it offered a unique chance to graduate, from young entrepreneur to responsible leader, invested in a sustainable future. 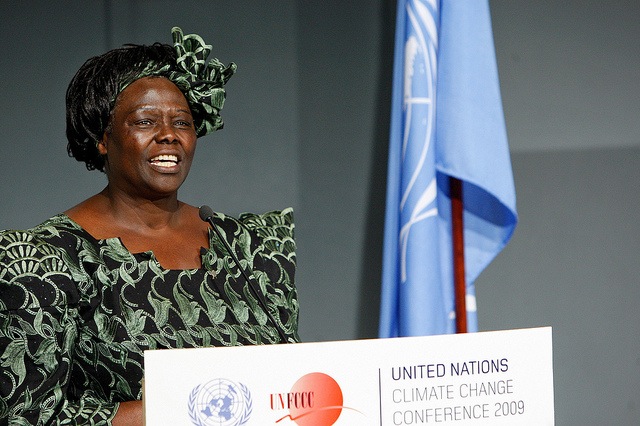 A key success factor for the GBM can be attributed to a gradual approach undertaken to organically nurture simple ideas into effective solutions. It is no surprise that the social enterprise movement has transformed the investment landscape across Africa. New business models offer fresh perspectives of how Professor Maathai’s vision was leveraged to inspire a new generation of change-makers, from regeneration to socio-economic empowerment. Significantly, the use of collaborative networks played a key role to sustain the movement toward social impact. Certainly, she wasn’t alone in dreaming up this idea, being inspired and influenced by her generation’s determination to effect social change through persistent activism.

In response, corporate investors have started to channel their resources toward enterprises that proactively engage innovative and sustainable solutions to achieve social outcomes in health care, employment, housing and education. Indeed, development finance institutions like the CDC Group have specifically designed their investment strategies to deliver and measure impact through job creation. In some cases, such targeted strategies effectively complement the role of government and the private sector to stimulate economic development. In Africa, much like the West, the trend of aligning capital investment with social returns has unleashed “the sharing economy,” espousing cooperative values. Although impact investing (without that formal name) has long played a key role in the running of public services, the fact private, for-profit actors (not merely development banks) are now invested in this concept implies a significant step to managing societal challenges. Still, evidence suggests that success cannot be achieved in isolation, and requires a cluster network of people, programs and places to inspire transformative change. Key stakeholders will connect the dots that catalyse development impact as a tidal wave of capital flows towards pioneering models.

It seems that now is a good time to celebrate Wangari Maathai’s vision and build upon it!

David Kayondo is the Founder of Goldswans Group, a firm focused on investments, advisory and enterprise services in the frontier markets of Africa.