Editor’s Note: Part two of a two-part series on Husk Power System’s recruiting in Varanasi, India, from Acumen Global Fellow Neha Kale. Husk Power is an Acumen Fund investment that uses rice husks to electrify rural villages in India. This post originally appeared on Kale’s blog as well as the Acumen Fund Blog, where part one also may be found.

After the six-hour drive to Varanasi we climbed up three flights of stairs to step into an unbearably hot room. There were about 40 candidates eagerly and silently waiting for our arrival. I couldn’t help but feel incredibly guilty for making them wait; I presume they had been there for at least two hours.

Just as I was getting used to the stuffy atmosphere, the invertor gave out. The two giant rickety fans that were helping ventilation in the room had stopped working just as Satish ji, interim director of operations, began providing the attendees an introduction about Husk and the importance of our work. 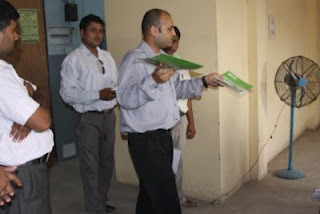 We were there to recruit electricians and linemen for our operations team. These men would be trained via Husk Power University (see a previous post on the university here) and then sent to the field to assist especially in preparation for the upcoming monsoon months. Birender ji, head of engineering at Husk, asked each candidate a series of simple technical questions. I was there to assess their experience, communication and willingness to work within the harsh rural conditions in Bihar. Husk invests a lot in its employees, so it is important that we not only attract, but more importantly, retain talent once they are trained.

To ease the obvious nervousness and anxiety, we started out asking simple questions like their name, telephone number and school details – information they had already completed on their forms prior to the interview. Eventually, Birender ji and I posed a series of worst-possible scenario questions for the candidates:

Needless to say we got a great variety of interesting responses to the questions. The questions were all based on reasons we’ve lost trainees in the past. As I asked these difficult but realistic questions, I was amazed at the candidates’ willingness to endure hardship for long term gains. It is difficult work – Husk needs young, honest, hardworking individuals that aren’t quitters. The employees aren’t incentivized with huge salaries, bonuses or luxuries. If they can manage to stick it out, it is an incredible opportunity for them to learn, grow and progress – in a region where opportunities for semi-trained individuals are slim at best. The interviews reminded me of this ad we had discussed at Acumen’s midyear check in:

Context: In 1913, Sir Ernest Shackleton placed this ad in the Times to build a crew for an expedition to the South Pole. 5,000 men responded to the ad and 27 were selected.

The good news is that we selected over 25 people to join our electrician training program. Trainees are provided a monthly stipend along with housing for the training period. Successful completion of the training guarantees them a job with HPS. Those that were not selected for the electrician training were offered an option to train as operators. Once they gain experience operating a plant and develop their technical skill set, they can begin training as an electrician.

Working at Husk has definitely wiped away any illusions I may have had about working in rural India. It is a dirty, sweaty, difficult, trying but also an incredibly unique experience. Where else could I ever show up in flip flops to an interview and question a candidates culinary skills? As we were leaving, I realized that this was the first interview most of the candidates had ever attended. I left in great admiration of their determination and willingness to work hard.

(Left: A candidate completes an informational sheet prior to his interview).

I too am beginning my career search post the fellowship. The night before our trip to Varanasi, I had politely turned down an opportunity after an interview because the job responsibilities didn’t sound exciting and I realized they weren’t a good fit. After an incredibly humbling three-hour experience with these candidates, I realized how fortunate I am to have a choice.

Unfortunately, for many around the world it is still a luxury to have options to explore. To have a means to earn an income, beyond that generated through farming for survival, is rare. I am convinced that it is by creating access to opportunities that we can truly empower. Education is at the core of every development issue we battle and HPS is doing its share to educate and empower the local population.

This week, we welcomed the new recruits in Patna. I’m excited to see the fruits of HPS’ very first ground level recruiting session.