Editor’s Note: In 2011, 14 countries in sub-Saharan Africa will hold presidential elections. The following is part of a series posts examining some of these critical elections and their potential impact on poverty alleviation.

The most significant presidential election this year in sub-Saharan Africa occurred this past weekend – and its outcome has been both widely expected and widely shocking.

He of the fortuitous name and political career, Goodluck Jonathan, appears to have won the election handily, avoiding a run-off round with 59 percent of the vote. Yet a paroxysm of post-election violence – sadly not uncommon in a country with such deep societal divides and an entrenched vote-rigging history-has highlighted the fundamental challenges the next president will face.

Nigeria has the largest population in Africa (the eighth-largest in the world) and is the sixth-largest global producer of oil. Yet for all its economic potential, the country ranks third among the continent’s economies, and its UNDP human development index rating lands it among the bottom 15 percent worldwide. The hand on the tiller of this diverse, resource-rich nation is thus a critical question for the region, and the world, at large.

In a country as diverse as Nigeria – containing over 250 ethnic groups but often viewed through a Muslim vs. Christian lens – a “see-saw” presidency is perhaps unsurprising. In recent decades, the predominantly Muslim north and the largely Christian south took turns sending a president to Abuja, generally alternating after the second term.

That system was disrupted in May 2010 when the northern-born president, the chronically ill Umaru Yar’Adua, died three years into his first term. His vice president, southern Christian Goodluck Jonathan, succeeded him and decided to stand for the presidency in this year’s election.

Opposition elements-particularly in the north-loudly objected to losing their full “turn” in office, making what is often a rubber-stamp process for an incumbent Nigerian president into a much more competitive election.

But this campaign season was different in another respect. Plagued by chronically fraudulent elections, Nigeria spent a record $585 million to overhaul its voting system to decrease the likelihood of abuse. The result was what The Economist called “the first credible election in Nigeria since the end of military rule 12 years ago.” 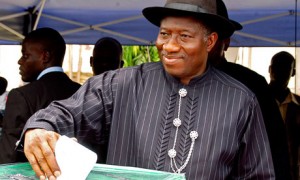 Goodluck Jonathan: A zoologist by training, the mild-mannered native of the restive Niger delta region was picked as Yar’Adua’s running mate after a successful stint as governor of his home state, Bayelsa. In his year-and-a-half as acting president (including the months before Yar’Adua’s death, when he essentially assumed the president’s official duties), Jonathan, 53, signaled interest in certain fundamental reforms. Upon assuming power last May, he declared his “total commitment to good governance, electoral reform and the fight against corruption.” Shortly afterward, he replaced the head of Nigeria’s election commission with serious-minded Attahiru Jega-and gave him free rein to overhaul the deeply flawed voting system. Jonathan has also proposed a sorely-needed energy privatization plan and is so far managing to maintain a fragile 2009 cease-fire in the Niger delta region.

Some argue that Jonathan seems to have cozied up more to powerful interests before the election, but Nigeria’s 14th president hardly seems a wheeler-dealer in the continent’s “big man” political tradition. He has even been called “more of an administrator than a leader.” In this regard, Jonathan could follow the highly competent model of Lagos state’s efficient, technocratic governor, Babatunde Fashola-or he could prove too weak to conquer the formidable problems currently corroding Nigerian society.

General Muhammadu Buhari: While losing decisively to Goodluck Jonathan in the official vote tally, Buhari, 68, nevertheless captured all 12 of the country’s northernmost states, underscoring the country’s north-south divide. A Muslim from the northern Katsina state, he served as president of Nigeria from 1983 to 1985, taking power in a bloodless coup and eventually losing power the same way.

Buhari’s short tenure seemed sometimes less characteristic of a president than a stern father figure. Exasperated with the abuses of the previous regime, he launched a “War Against Indiscipline,” arresting 500 officials and businessmen on charges of corruption. The same “war” also extended to unruly bus-stop denizens, who were scared into neat queues by soldiers with whips-as well as tardy civil servants, who had to perform demeaning “frog jumps” to atone for late arrivals.

Buhari’s austerity-particularly when it came to the economy and the free press-quickly led to his downfall. In this election cycle, however, he has stressed his commitment to the democratic process and to continuing his anti-corruption crusade.

In recent days, despite a widely-praised electoral process, Buhari and his Congress for Progressive Change party have launched allegations of voting irregularities and vowed to legally challenge the official results.

Whether it’s riots in the north or delta militias in the south, much popular frustration in Nigeria can be traced to a fundamental disconnect between the country’s economic potential and the standard of living for most citizens. Seventy percent of Nigeria’s population lives below the poverty line, with 80 percent of its considerable energy revenues enriching just 1 percent of its people, according to a World Bank estimate. Emblematic of this failure to capitalize on potential is the fact that despite its global status as a major oil producer, Nigeria is still in the humiliating position of having to import almost all of its petrol.

Underlying this problem are systematic challenges of corruption and ethnic division, which seem entwined in a vicious cycle. Citizens have no incentive to play by the rules if they believe the game is already rigged by those with more money or connections. And politicians distrustful of the country’s democratic processes will garner support through bribes, while shielding themselves from opposition threats by installing family or clan members in positions of power.

Goodluck Jonathan’s stated agenda of tackling corruption, security problems and power shortages demonstrates a clear understanding of the country’s most important priorities, which are themselves interlinked. The corruption crackdown in particular could pay dividends by helping the nation’s citizens trust and use their official institutions at least as much as their ethnic or religious groups.

Nigeria already has so many pieces of the puzzle: bountiful resources, auspicious geography, a famously entrepreneurial and optimistic population. But it will take an exceptionally shrewd and courageous leader to fit the pieces together in a way that moves the country forward in a meaningful way.

Here’s hoping that Nigeria elected one on Saturday.