Africa’s Microinsurance Maze: Early trial-and-error efforts could lead to coverage for 1 billion in 2013

If everything goes according to plan, 2013 could be the year that mobile microinsurance blossoms in Africa, providing millions across the continent the chance to try out basic insurance policies on a small scale. This combination of a typical microfinance product and the popular wireless delivery method has succeeded in several pilot projects in a few African countries, grabbing the attention of insurance companies, mobile-network operators and development organizations across the continent. Industry projections have it available in as many as 25 African countries by the end of the year, which would mean access for more than half of Africa’s 1 billion population.

Africa proves that demand for financial services transcends income levels. Africans patronize loan sharks, pool their savings in group schemes, and buy tickets in informal lotteries – this proves the demand for financial services is there. If licensed companies could offer some of those options as a regulated activity they could end up cheaper (by preventing abusive interest rates, for example) and safer (through the standards and enforcement methods of regulation and supervision). Mobile microinsurance is the offering of a few simple types of insurance coverage via mobile-money accounts or other mobile-phone platforms, and can protect people against economic shocks like injuries that sideline workers who provide for their families, or the costs of holding a funeral when a family member dies.

Mobile microinsurance has proved popular in trials in Senegal, Tanzania, and Ghana. In the latter country, small amounts of free coverage were offered to customers of the mobile phone operator Tigo as long as they spent a base amount or more monthly on pre-paid airtime. Tigo began offering this coverage in February 2011, and a little more than a year later 1 million people had signed up. That is roughly one in 25 Ghanaians, and a larger number of customers than Ghana’s existing insurance industry had managed to attract as a group up to that point. But not every pilot has taken off like this, however. Another one in Ghana attracted about 20,000 customers in the same time period, largely because it wasn’t a free service. The challenge for the future is getting people to pay.

For now, however, insurers, mobile-phone companies and behind-the-scenes administrators also involved have learned that mobile networks and microinsurance are potentially a great fit. 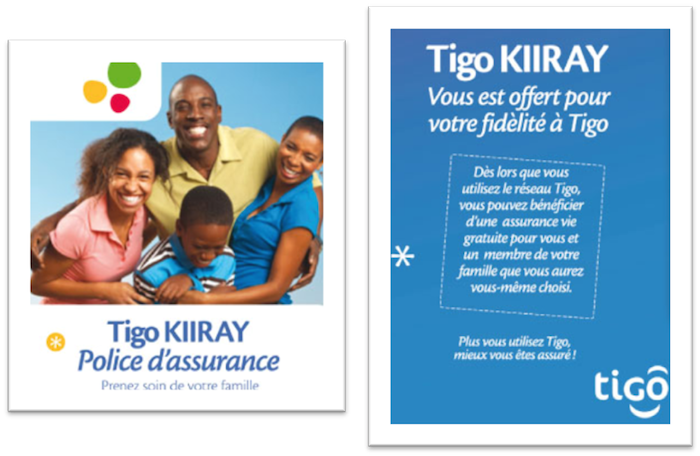 Tigo’s success in Ghana underscores how difficult it has been for insurance companies to grow in Africa through their traditional methods: insurance brokers and partnerships with banks in which insurance is pitched to customers in the branches. Insurers are not widely trusted in developing countries, but mobile phone companies are: a recent survey in Ghana showed that 70 percent of people would rather buy insurance from a telecom than an insurance company, for example. In many African countries the corporations most visible and accessible to people of all income levels are the mobile phone companies, with their many branded shops, street sellers hawking prepaid airtime, and umbrella-cart service stops. Their logos and slogans are everywhere.

Mobile-phone companies have an incentive to allow insurance to be sold over their networks beyond taking a slice of the profits. Keeping customers is a tough trick in poor countries, as mobile phone users often buy prepaid airtime in small blocks and are typically willing to switch phone chips and use several networks and phone numbers at once, according to which one is offering the best deal when it is time to make a call or send a text. But Tigo’s offering is an incentive to use its network exclusively. Signing up customers for microinsurance also is a way to get consumers to use mobile money accounts. M-Pesa in Kenya is the best known and most successful mobile money platforms in Africa, but it’s alone among the approximately 50 such systems in place considered a success. Elsewhere customers have been slower to warm up to the concept.

In most cases insurers and network operators deploy an outside party to run their mobile microinsurance program. Only a few exist, and they are generally the people initiating new projects and experimenting with new models. MicroEnsure is based in Chicago, grew using a grant from the Bill & Melinda Gates Foundation, and recently converted to a for-profit entity. MFS Africa is based in Johannesburg. Stockholm’s Bima is owned by Kinnevik, a Swedish investment firm that also owns Tigo, which operates in developing markets but is based in Luxembourg. Namibia’s Trustco was an early innovator, and in recent months Telenor Group, of Norway, has entered the market.

These companies typically design the policies, train mobile-phone sales staff to explain it to customers, process claims, and generally oversee operations. Microinsurance differs from conventional insurance in the cost and the comprehensiveness of coverage, but these companies also provide some other areas of expertise necessary: policies need to be simple enough to be easily explained, and claims must be handled fast – within days not weeks – in order to build trust and approval for the insurance market as a whole.

For now, the definitive study of mobile microinsurance, Emerging Practices in Mobile Microinsurance, was published last year by the GSM Association. This survey of what is available found 29 different products available in 13 countries, including in India, Bangladesh, Thailand, Indonesia, the Philippines, Pakistan and Honduras. But some of those efforts have failed by now, and most of the successes and new ventures are in Africa. New studies are expected in 2013, and that should provide further guidance on what’s working and where.