ANDE Moves From Analysis to Action

While it still represents “pocket change” compared to the heavy hitters of private equity and microfinance institutional lending, the small and growing business investment sector is growing. Although the data for 2011 are still preliminary, it appears many fund managers are dedicating larger percentages of their portfolio toward investment in emerging market small and growing businesses (SGBs). Meanwhile, new funds are being raised that focus on SGBs, or those businesses with five to 250 employees that often fall in between the cracks of lending opportunities.

These were among the prevailing view from the annual Aspen Network of Development Entrepreneurs Conference 2011, the organization’s third such summit.

“There is greater interest in the space and additional resources that are being designated to support it. The top line is there has been faster-than-expected growth within the sector,” ANDE’s Executive Director Randall Kempner, told me after the conference had wrapped. “There are a number of trends that point to that. The first is the initial data shows fund formation and the amount of money funds are asking for has increased.”

ANDE’s mission is tilling the soil to create a fertile investment/development ground for SGBs, which are generally too large for microfinance and often too small for a private equity placement. But that tried and true “missing middle” definition of SGBs may not hold for the long term, as some MFIs are reaching up to meet them and some established funds are reaching down to meet these businesses with financing.

In a poll of its members, ANDE found that most believe 2011 has been less challenging than 2010 in raising capital, and they expect 2012 to be even less burdensome.

There are plenty other signs of momentum of course. The high-profile G20 SME Finance Challenge, and organizations including UK’s DFID and OPIC, have either launched new or are expanding financing initiatives; while more traditional investors JP Morgan, which defined impact investing as an asset class, are starting their first.

Since ANDE’s 2010 conference, new networks tying both established and fledgling investors are taking shape, and pulling retail investors into the field.

“There’s been a proliferation of marketplaces and exchanges,” Kempner said. “There’s Nexxi, GATE, Mission Markets, the Asian Impact Investment Exchange and Root Change. … None of these have done a lot of deals yet, but it is a sign the market is maturing and growing that you see all these platforms emerging.”

One additional indicator is ANDE’s own membership ranks, which have increased 40 percent (or 40 members) over the past year. ANDE expects to open new chapters in Colombia and West Africa within the next six months, bringing its total chapter count to seven. (Brazil, India, East Africa, South Africa and Central America/Mexico, are the others.) Based on feedback from members, Kempner also predicts a significant uptake in IRIS reporting by ANDE members over the next year. The target is for 40 ANDE members reach IRIS compliance, up from 10 members currently.

Taking in a variety of sessions, from Latin American growth to developing retail investment to building green energy portfolio companies, my impression was ANDE is moving from an organization primarily focused on identifying issues to mobilizing around action to solve them.

“The sector can pretty safely say that the initial analytical phase is mostly done. We know the challenges, and have now shifted to the implementation phase, to the action phase,” Kempner said. “I identified five areas (raising capital, finding investible firms, doing deals, achieving and measuring results, and financial exits) from an investor perspective where there are significant challenges. But what’s new is you’re starting to see real action to address each of these these challenges.”

The research to support each of those solutions is critical. My take was Meghana Ayyagari, of George Washington University, presented some compelling data on the critical nature of SGBs on employment, especially for low-income countries. (See the chart below). Kempner agreed, but added that even more depth is needed. 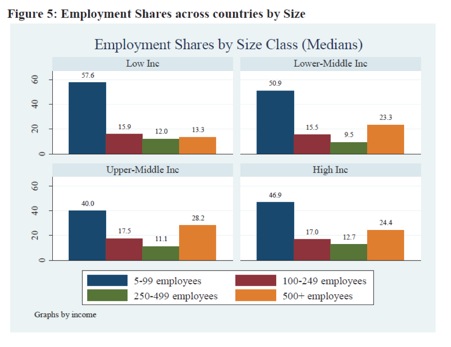 “We use the term SGBs for a reason and the “growing” part is more important than the “small” part, he said. “But it’s hard to identify which companies have growth intentions.”

Kempner said the sector needs to target the linkage between intervention and expansion, i.e. did an investment actually lead to growth and ultimately to poverty impact for individuals and families . “It’s second one that’s so hard to get to and we aspire to learn more about,” he said.

To that point, organization recently hired Saurabh Lall (a NextBillion Contributor), as its new research director, to identify a research agenda for SGBs.

“What ANDE ultimately cares about is helping poor people lead better lives,” Kempner said. ” It’s not about business per se — we care about supporting entrepreneurship because it’s a poverty-fighting tool that is not close to being fully utilized right now. But we need to measure our impact in lives improved, not firms formed. ”