Aspen Network of Development Entrepreneurs (ANDE) released its second annual impact report today, which highlighted the growth of the small and growing business (SGB) sector with the launch of new 31 funds looking to SGBs in emerging markets, in addition to the impact of their 110 members on the sector.

ANDE, launched in March 2009, identifies common challenges and opportunities facing SGBs and implements field building initiatives for those involved in supporting them. SGBs are defined as those with five to 250 employees, that have high potential for growth, and seek capital in the range of $20,000 to $2 million. They are different from SMEs in that they start small and are designed to stay that way. In most cases SGBs are too small to attract commercial investment while at the same time too large to benefit from microfinance. In addition to challenges around access to financial resources, SGB’s also face challenges around talent and access to knowledge and information.

According to ANDE’s Impact Report, 2010 brought additional financial resources to SGBs. In 2010 there were 199 funds, which raised a collective $1.5 billion to invest in SGBs. In addition to the launch of 31+ funds with plans to target mainly SGB investments, 11 percent of total emerging market private equity fundraising amounts were SGB-focused in the first half of 2010 (see Figure 3 from the report below for information on the number of funds per year over the last decade).

The organization also reports that the SGB sector is outpacing the growth in overall emerging-market private equity fundraising. Using fundraising targets of funds to proxy the amount of funds reaching SGBs, ANDE found that the percentage of funds dedicated to investments in SGBs increased from 6 percent in 2009 to 11 percent in 2010. To gain a better geographic sense of where these funds operate, from 2001-2010 43 percent of funds targeted Africa, while 15 percent went to Latin America, 13 percent in East Asia, and 11 percent in India, also within the last two years the Middle East and Southeast Asia have increased their share of total investment funds. 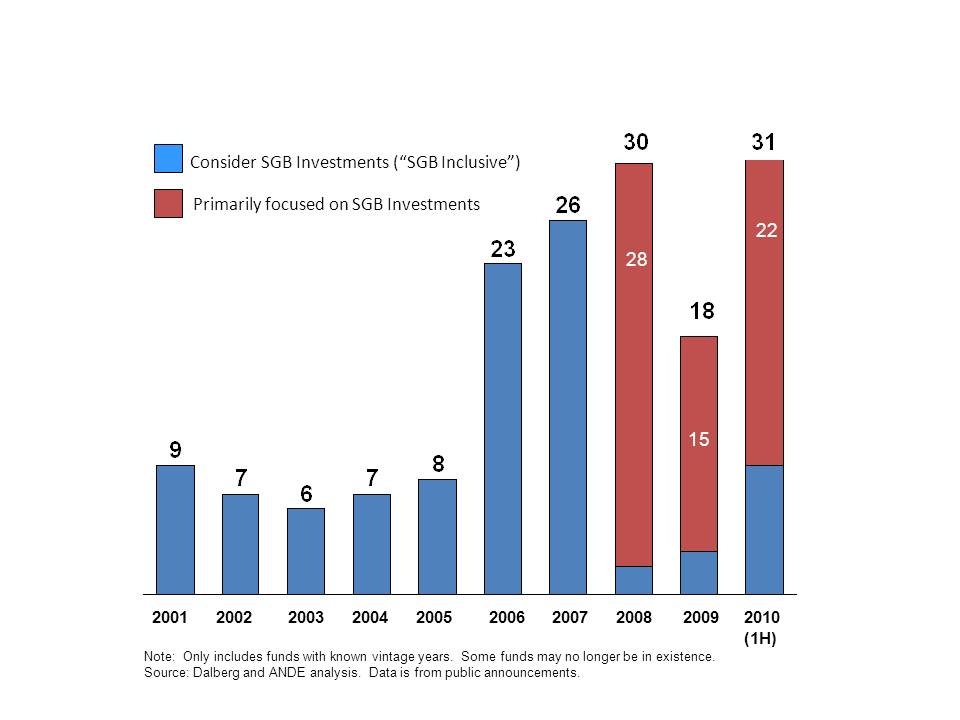 ANDE’s 110 members operate in 150 countries, see ande.force.com for a map of the regions and sectors members are focused. Together ANDE’s members manage 63 SGB-focused funds, and since inception they have invested more than $900 million in over 2,500 investments (see Figure 10 from the report below for more information on member’s support to SGBs). These SGB supporters often provide a mix of support including investment capital, training programs and market insights and linkages. They also estimate that 11,100 SGBs have received direct technical assistance and/or investment by ANDE members. Specifically, in 2010 $80 million dollars had been invested in technical-assistance activities, with basic business training and business-plan development as the most common offerings. 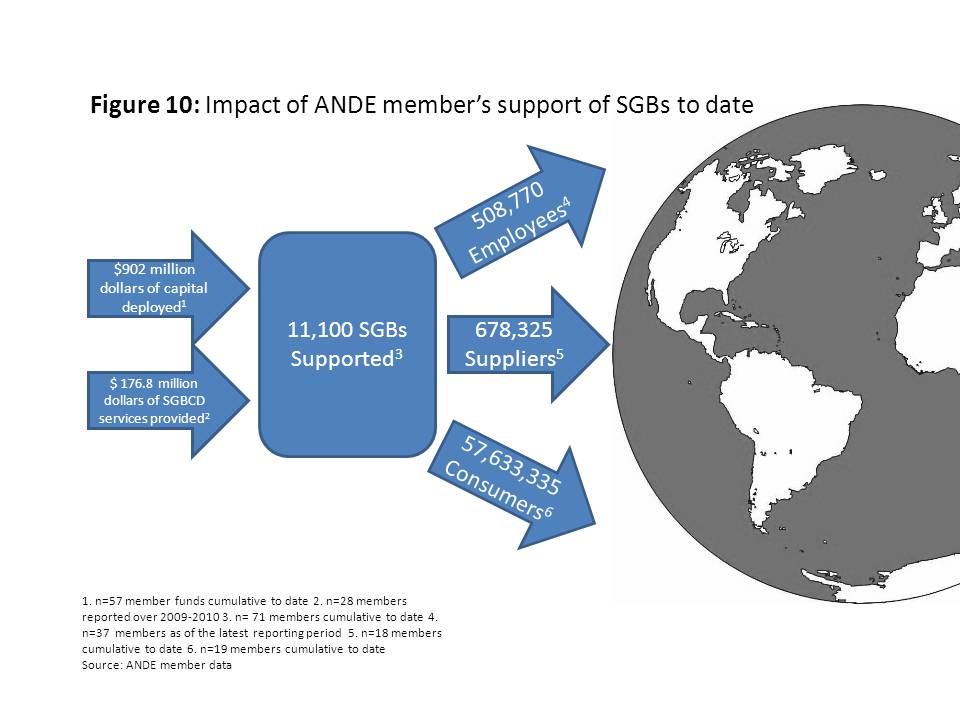 Overall, 2010 was a year of growth ANDE members, the ANDE organization, and the SGB sector. In terms of ANDE’s growth we saw launch regional chapters in Brazil, Central America/Mexico, East Africa and South Africa, as well as add new members to the network.

We look forward to tracking on ANDE’s work in 2011 as they continue to address challenges facing the sector, including: 1) understanding economic and social impacts of SGBs and intermediaries 2) understanding the relationship between capacity development services and investment capital in supporting successful SGBs and 3) unlocking additional financial capital.

To address some of these topics, in 2011 ANDE plans to continue to grow by launching at least two more additional chapters, enhancing their presence in Europe, and cultivating a diverse membership base while specifically attracting more large corporations and banks serving SGBs. Perhaps most exciting, they plan to launch a research function within ANDE to keep members informed about leading field research, as well as to carry out their own research agenda.