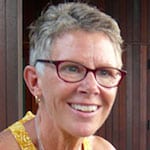 Anne Patterson started Solavore after a successful high-tech career. She cut her teeth at Hewlett-Packard and managed operations planning for Steve Jobs at NeXT Computer during his Wilderness Years away from Apple. She later worked for 3Com Corporation, managing distribution and logistics for Europe, the Middle East and Africa, while based in the UK. During her corporate years, Anne mentored young women and helped build schools in Africa. Today, she lives close to the bone, dividing her time between a sailboat and an off-grid island cottage in the Long Island Sound. Wind and sun play prominent roles in her life. The original solavore, Anne believes passionately in solar cooking as a clean, joyful, liberating alternative to wood fires and grid-based fossil-fuel appliances.