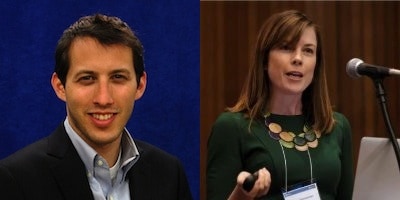 Eric Tyler focuses on the intersection of technology and entrepreneurship globally. He is aWorld Bank consultant,the founder andCEO of the startupGlobality,and a research fellow at the think tank New America Foundation. His projects and research span four continents ranging from consulting with international MNOs, working with mobile banking startups in Kenya and building mobile apps distinguished by the White House. His writings have been published in print and online in The Guardian, The Wall Street Journal’s Live Mint, CNN, Foreign Policy Magazine, Forbes, The Huffington Post, among other media outlets. For more information, please visitEricTyler.com

Jamie M. Zimmerman is a senior associate at Bankable Frontier Associates,primarily focused on projects related to electronic payments by governments and donors to the poor in low-income countries. Clients have included CGAP and the Better Than Cash Alliance with work in Haiti, Kenya, Malawi, Uganda and the Philippines. She is also a senior policy consultant at CGAP.

She was previously director of the Global Assets Project at the New America Foundation, which aims to inform and stimulate global asset-building innovations among the increasingly integrated areas of financial access, financial education, social policy, and commercial financial services. She directed the project’s various efforts to advance savings and asset-building policies and initiatives around the world.

Previously, Zimmerman was the associate director of Globalization Studies at the University of North Carolina at Chapel Hill’s Kenan Institute of Private Enterprise, where she managed research and outreach efforts for projects aimed at building awareness of the relationship between international trade, human rights, and corporate social responsibility. That research lead to the 2007 book Trade Imbalance: the Struggle to Weigh Human Rights Concerns in Trade Policymaking, which Zimmerman co-authored with Dr. Susan Aaronson.

Internationally, she has worked as an international trade consultant in São Paulo, Brazil, and with nonprofit micro-enterprise development groups in Urubamba, Peru. She is a graduate of the University of Kentucky, where she also earned a master’s degree in international political economy and international development from the Patterson School of Diplomacy and International Commerce. She can be reached on Twitter at@jamiemzimmerman.