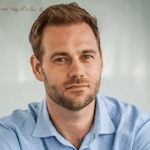 Jesse Moore is CEO and Co-Founder of M-KOPA, a world leader in empowering homes and small businesses through connected technology.

M-KOPA has pioneered and scaled an advanced pay-as-you-go platform that unlocks solar, information, technology and finance to upgrade lives in over 750,000 homes and businesses in Africa. M-KOPA was awarded the Zayed Future Energy Prize, made the MIT Technology Review 50 Smartest Companies list and was ranked by Fortune Magazine as one of the Top 50 Companies Changing the World. Investors in M-KOPA include Generation Investment Management, CDC Group, and Standard Bank, as well as entrepreneurs such as Virgin Founder Sir Richard Branson, AOL founder Steve Case, and former Duke Energy CEO Jim Rogers.

Jesse moved to Kenya in 2010 to start M-KOPA and has overseen the company’s growth to over 2000 employees and sales agents.  Prior to M-KOPA, he was the Director at the GSM Association in London, where he worked with mobile network operators in Africa and Asia to adopt new business models that drive business growth and benefit low-income consumers, such as mobile money.  Early in his career Jesse worked with the international development charity CARE and as a strategy consultant for Monitor Group.

Originally from Toronto, Canada, Jesse holds an MBA from Oxford University (Skoll Scholar) and a BA from the University of North Carolina (Morehead Scholar).  He was selected by the World Economic Forum as one of 100 Young Global Leaders in 2017.