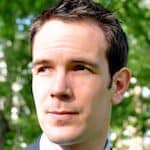 John Rendel is the founder and CEO of PEAS, a social enterprise that widens access to secondary education in Africa. He studied philosophy, politics and economics at New College, Oxford. A trip during a university vacation to East Africa led him to found a low-fee, not-for-profit secondary school in Uganda. He won the Teach First Ambassador Award, an Unltd Social Enterprise Award, to become a member of the Courvoisier Future 500 and the Rockefeller Top One Hundred Next Century Innovators. PEAS has won the UK Charity Awards and the WISE Global Innovation Awards. As of February 2017, PEAS is educating 1.3 percent of all secondary school students in Uganda.