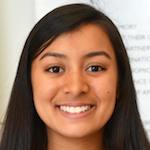 Milani Chatterji-Len is an undergraduate student in the Department of Civil and Environmental Engineering at the Massachusetts Institute of Technology. During summer 2016, she worked on USAID’s Digital Developments for Feed the Future Team within the U.S. Global Development Lab, where she researched the current state of digital tools in agriculture and built an evidence base of the uses of digital technologies in smallholder farming. She is currently an undergraduate researcher at the MIT Parsons Lab for Environmental Engineering and Science, where she studies coastal wetland fluid mechanics through physical models. Previously, she was a volunteer researcher at the National Institutes of Health on a team that investigates the effects of inborn errors in metabolism. She is a candidate for a bachelor’s degree in civil and environmental engineering, with a minor in international development.