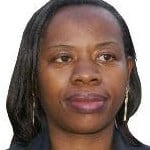 Monique Nsanzabaganwa is vice governor of the National Bank of Rwanda. Previously, she Rwanda’s minister of state in charge of economic planning, then minister of trade and industry. As the first female minister of trade and industry, she spearheaded the implementation of numerous reforms in the areas of consumer rights and protections, competition and intellectual property rights. Under her tenure as minister of state in charge of economic planning, Nsanzabaganwa contributed to the strengthening of the planning and statistical system at both the local and national levels. She’s the chairperson of New Faces, New Voices’ Rwanda chapter. She earned a doctorate in economics from the University of Stellenbosch, South Africa.