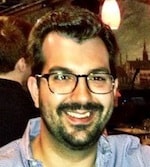 Nick works at Agora Partnerships in Washington, D.C., as an associate and writer, providing strategic guidance in support of the organization’s communications and public-relations activities. Through its Impact Accelerator, Agora supports new generations of social entrepreneurs by connecting them with the capital and resources they need to use business to solve the world’s most pressing social and environmental problems.

Nick graduated from the College of William & Mary in Williamsburg, Va., where he studied marketing and music. Follow him on Twitter @ncfitzgerald.