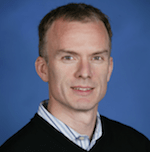 Paul Garnett is the director of Affordable Access Initiatives at Microsoft, where he focuses on new technologies and business models that will enable billions more people to affordably get online. Garnett and his team work with internet access providers and other partners to deploy new last-mile access technologies, cloud-based services and applications, and business models that reduce the cost and improve the quality of internet access.

Throughout his career, Garnett has consistently been drawn to the challenge of universal access. Before joining Microsoft, Garnett spent 17 years in Washington, D.C., where he focused on telecommunications law and policy. As Assistant Vice President, Regulatory Affairs, at CTIA-The Wireless Association®, he represented the U.S. wireless industry before the Federal Communications Commission (FCC) and the U.S. Congress. Garnett also worked at the FCC in its Wireline Competition Bureau leading complex rulemakings on universal service and intercarrier compensation regulations. Garnett was an associate in Swidler Berlin’s telecommunications practice and a consultant at Price Waterhouse advising on the privatization of state-owned telecommunications and utility monopolies.

Garnett earned his bachelor’s degree in political science at Union College and his law degree at the Catholic University of America, Columbus School of Law.