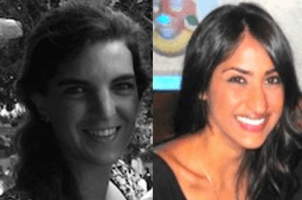 Carla Rivero started working in Ashoka Mexico to coordinate the American Express Emerging Innovators Leadership Boot Camp and is now working in the area of Institutional Development as the Strategic Alliances Analyst. After university, Rivero started working with entrepreneurs in the tourism sector in Mexico, in an organization called Going Barefoot and managed the area of sustainability and social responsibility. Carla studied Industrial Engineering in the Universidad Iberoamericana de la Ciudad de México and took a course in Sustainability in the Universidad de Medio Ambiente.

Smita Satiani is an Indian-Pakistani American advocate, writer and traveler that has lived and worked in Los Angeles, New York City, Mumbai, Paris and currently lives in Washington, D.C. With an expertise in the intersections of violence against women and economic empowerment, Satiani spends her days as a project manager for Ashoka Changemakers, an open-sourced community of action that connects social entrepreneurs around the globe to share ideas, inspire, and mentor each other to solve the world’s most pressing social problems. Previous to Ashoka, Satiani worked at the William J. Clinton Foundation’s Economic Opportunity Initiative in Harlem, New York supporting women and minority entrepreneurs across the U.S. through an Entrepreneur Mentoring Program in partnership with Inc. Magazine.