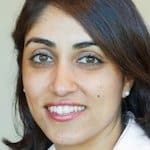 Since 2001, Rosita Najmi has worked and lived across 30-plus countries and managed programs, investments and research at the World Bank, IFC, Omidyar Network, Mercy Corps and Accion. She joined the Bill & Melinda Gates Foundation in 2015 after three years as an impact investor, four years at the World Bank, four years at leading international development NGOs and three years as a social entrepreneur. Policy and advocacy strategies she leads at BMGF include women’s financial inclusion, regtech, derisking and U.S. government engagement. She brings field research, publications and operational experience from Benin, Indonesia, Kazakhstan, Samoa, Tanzania and Vietnam. Her contributions and collaborations span government, the private sector, civil society and multilateral organizations and bodies, including the G7 and G20. Trilingual, she earned a master’s in business administration from Harvard and a bachelor’s degree with honors in economics, French and politics from Wake Forest University. She is a term-member of the Council on Foreign Relations and lives in Washington, D.C. Twitter: @RositaNajmi