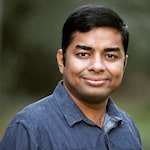 Ruchit G Garg is founder and CEO of Harvesting (www.harvesting.co), a FinTech company focused on connecting finance with smallholder farmers in emerging markets. With the vision to create a profitable yet very impactful enterprise, Garg travels across Africa and India to understand challenges in agricultural financing. Harvesting has been awarded Best FinTech by FMO in African Microfinance Week and has won a Global Grant Challenge award from Singularity University. Prior to Harvesting, Garg was founder and CEO of 9Slides, an online learning company for growing businesses. Garg has worked with Microsoft and contributed to many key projects such as XBOX Live, Windows 7, MSN Games, etc. Garg is a mentor/advisor to several startups in India and the United States.