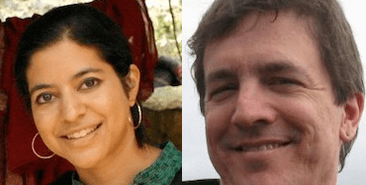 As Executive Director of Upaya Social Ventures Sachi Shenoy, has nearly a decade of experience in developing social enterprises to meet the needs of the poor and ultra poor, designing and implementing field interventions, and conducting social performance evaluations and investment advisory for a variety of organizations throughout Asia. She currently serves on the board of directors for Upaya and Samridhi Agri-Products, and on the advisory boards of InVenture and the Chicago Booth Social Enterprise Initiative (SEI). Her work has been featured in Wall Street Journal – India and the Stanford Social Innovation Review.

Sachi spent three years at Unitus, where she most recently served as Director of Global Programs and led the Social Performance Management Implementation Project (SPM IP) and Sorenson / Unitus Ultra Poor Initiative. Prior to Unitus, Sachi served as Area Manager at SKS Microfinance Pvt. Ltd., leading the organization’s entry into the New Delhi urban microfinance market. In 2005, Sachi authored the business proposal for the SKS Ultra Poor Program, designed to uplift rural, destitute populations. Sachi has also worked at New York-based CDVCA, where she evaluated seed-stage social enterprises and constructed investment recommendations for its Central Fund; JP Morgan Chase, where she worked in the Sales & Trading division; and Price Waterhouse LLP, where she served as a management consultant for the financial services industry.

Sachi holds a B.A. in Economics and an M.B.A. in Finance and Entrepreneurship with High Honors from the University of Chicago.

Brian Arbogast is currently an advisor to Upaya as well as a senior advisor to the Boston Consulting Group’s Technology, Media, and Telecom team after a 20+ year career with Microsoft. From 2000 to 2010, Brian served as a Corporate Vice President, responsible for delivering the mobile services strategy, platform, and experiences for Windows Live and Windows Mobile, as well as the strategy, platform, and integrated services for network operators. These R&D efforts spanned campuses in the U.S., China, Israel, and Portugal. Prior to 2000, Brian managed the teams which developed the core technologies behind Windows Live Hotmail, Messenger, calendar, contacts, storage, VoIP, and online identity services when these were the highest-scale services in the world, growing from 150 million to over 500 million users. Earlier roles included running Visual Studio from 1997 to 2000 and Access from 1994 to 1997, and working as a lead developer on Access 1.0.

Brian has also been an active angel-stage impact investor in the clean energy sector since 2007, and joined Northwest Energy Angels in 2010. He is also a founding board member of the Progress Alliance of Washington, which organizes a community of donors to make strategic investments in progressive social and political change in Washington State, and of Fuse, which uses online communications and grassroots organizing to give people a stronger voice in Washington State government. Brian holds a B.Math in Computer Science and Electrical Engineering from the University of Waterloo and a Certificate in Sustainable Business from the Bainbridge Graduate Institute.