Distribution and uptake are some of the toughest nuts to crack for social enterprises marketing health products to the BoP. Even when affordable solutions for urgent health needs exist, it can be difficult to get people to buy and use them, due to:

That’s one reason there’s considerable excitement about direct sales agent models in BoP health care. By recruiting sales teams in the developing world to sell health-related products directly to their communities, donors, NGOs and social enterprises hope to address the above issues – while also providing an income for the salespeople.

But can a model made famous by companies like Avon and Amway in the U.S. work for social enterprises selling low-margin goods in Africa? And how can health care companies successfully apply the model at the BoP?

In 2010, USAID, through the Strengthening Health Outcomes through the Private Sector (SHOPS) project, co-funded a 16-month study to answer these and other questions. With a primary focus on Ghana, Kenya, Senegal, South Africa and Tanzania, the study mapped almost 440 inclusive businesses and analyzed five direct sales agent business models in detail.

Michael Kubzansky, now vice president of intellectual capital at Omidyar Network*, led the research while at Monitor Group. He also co-authored a primer based on it, which provides guidelines for donors, social enterprises, and health goods manufacturers that hope to implement the model. In part 1 of a conversation with NextBillion Health Care, he describes the sales agent model and some of the challenges of using it to promote health in the developing world. In part 2, he discusses what works – and what doesn’t – in overcoming these challenges.

James Militzer: What options currently exist for distributing products in the countries you studied?

Michael Kubzansky: If you want to distribute products in the U.S. or Europe, there are extensive networks and a well-developed retail infrastructure to meet even base of the pyramid consumers’ needs there. In Africa that’s not the case. The distribution channels are informal, fragmented and very difficult to reach.

So one option is to go through existing retail stores, but there’s not a whole lot of formal retail infrastructure in any sector. A second option is to go through informal shops. And there have been a number of efforts to try to confederate informal shops – programs that have been certifying small-scale pharmacists, or agro dealers if you’re trying to sell fertilizer or seeds or agricultural implements to improve productivity. So there are a number of programs there.

But a third way that a lot of people are trying is the idea of direct sales agent models. And the general thesis behind that is: 1.) You can go into remote areas and reach people at their doorstep with important products, and 2.) In doing so, you can create livelihoods for the sales agents who are doing this.

So that’s the context under which we, at Monitor, undertook this analysis. To find out if there is a social case: Are they improving health outcomes and the delivery of essential goods and services? And also, to find out if there’s a commercial case: Can you make money doing it?

JM: What has your research shown? 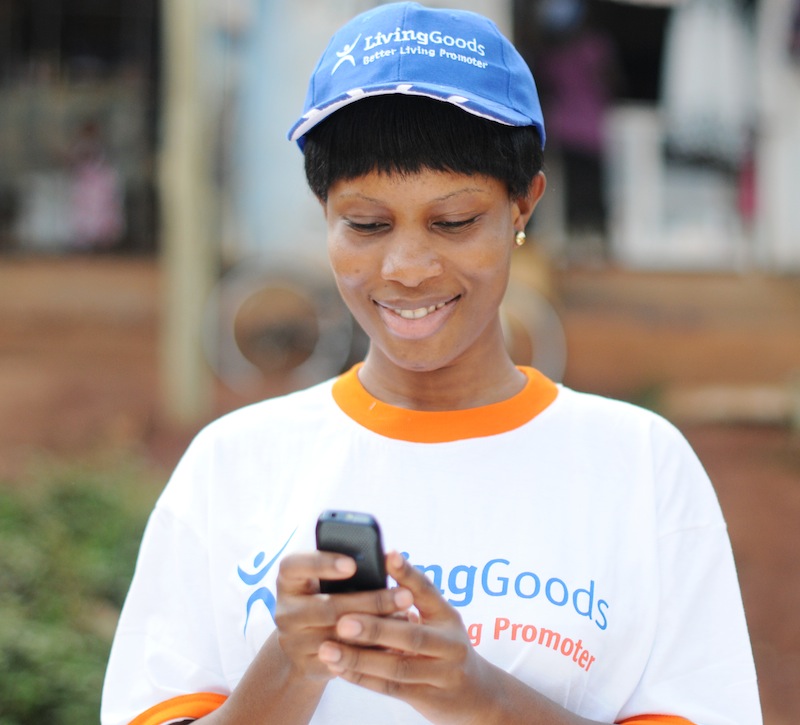 MK: In terms of the sales agent models, the social case is still being tested – Living Goods* has had the rigorous Abdul Latif Jameel Poverty Action Lab study ongoing, which should yield some answers this year in terms of what they do.

And in health care, there’s reasonable evidence that social franchises actually do better than the state, in terms of providing better, low-cost access to quality care. So I think the thesis would be that it’s possible to achieve the same results here. But people are only now beginning to collect rigorous data on the extent to which direct sales agent models produce social benefit.

(Above: a Living Goods Community Health Promoter at work.)

JM: Why haven’t they achieved viability yet?

MK: Some of that may be because they’re in their early days. Some of it may be because the product mix that they sell is not as inherently profitable as, say, cosmetics – though they’re now selling household durables that generate good margins and help to offset things. And some of it, according to the research in the primer, is attributable to some of the targeting choices that the current, more socially motivated sales agent networks make. HealthKeepers and Living Goods have decided to target rural, low-income consumers at price points below what they could get by walking to their informal pharmacy in the village. So that makes it more difficult to run a commercially viable model.

All that being said, our analysis suggested that one of the big issues of using low-income, villagers with limited education as your distribution sales force is the cost of training. And if you could reduce the cost of training or have a donor agency pay for it as a public good, then in fact, these agent networks would operate profitably – even though they’re targeting rural, BoP women and coming in at below-market prices. The training costs of these models are one of the key cost drivers.

JM: Why are training costs so high?

MK: First of all, if you’re asking rural women from the community to go out and become sales agents, you’re generally dealing with a population that’s not very well educated in the first place. They don’t have any medical or sales training. The agents we spoke to typically do this as one of three or four ways that they earn income. So they’re trying to make a living doing a bunch of things – they’re farming, they’re doing some odd jobs in the informal sector, they’re doing a variety of other things. So you start out with a base of people who are not your average commercial sales agents.

The second issue is that because this doesn’t always fit with people’s lifestyles or their career choices, there tends to be a lot of churn. All the money you spend on training goes out the door when somebody leaves the network, and you’ve got to go out and train somebody new from scratch. So one of the key issues in managing this is not just the cost of training, but keeping the level of churn of your sales agents low, so you don’t have to train up too many new ones. The organizations we spoke to, of course, recognize this issue and are dealing with it in various ways described in the primer, and churn rates are improving.

But with something like water filtration tablets, you need to explain how to use them, how long the water has to sit before you can use it, how to make sure you’ve got a clean vessel to put your water filtration tablets in. This requires time – and these are areas that are media dark. So companies can’t come in and solve this consumer education issue by just dropping some television advertisements about how to mix your water tablets, or how to recognize the symptoms of diarrhea in your child and to know when you should use oral rehydration. So it’s an intensive process of consumer training and consumer awareness-raising about health behavior, both proactive and reactive.

Disclosure: the Omidyar Network is an investor in Living Goods.