But can the model work with low price/low-margin products? And how can companies navigate the challenges of applying it at the BoP?

Hoping to answer those questions, USAID and the Strengthening Health Outcomes through the Private Sector project co-funded a 16-month study of direct sales agent models in Africa. Michael Kubzansky, now vice president of intellectual capital at Omidyar Network*, led the research and co-authored a primer based on it while at Monitor Group. He discussed the research with NextBillion Health Care.

In part 1 of our conversation, he described the sales agent model and some of the challenges of using it to promote BoP health. In part 2, he discusses what works – and what doesn’t – in overcoming these challenges.

James Militzer: In models that have been successful in developing countries, do sales agents only work for themselves, or do they use a pyramid structure with other agents working under them?

Michael Kubzansky: Most of the ones we looked at in Africa were simply agents working for themselves – but that doesn’t mean you couldn’t structure it another way. The Avon model that we looked at in South Africa, for instance, had more of the pyramid structure. And there are super dealers and wholesalers in other sectors, so I would expect there to be a variety of approaches that people take on this as well.

The benefit to the Avon model is that the training cost falls on the super agent. So that would be one way to mange your training costs, to leave it to the super agent as opposed to leaving it to the firm. The disadvantage is you’ve got less direct control, and it’s difficult to find a lot of good agents. One of the things we found with most agent networks is that it’s easy to find the first 10, 20, 30 – but when you want to scale up to 100, 200, 300, it’s difficult – particularly in more remote, rural areas. So it may be that some models are appropriate for different target markets.

JM: Can you talk a bit about the supply chain – how do products get into sales agents’ hands?

MK: It depends. If you’re Avon, you have your own supply chain and your own system in place. With Living Goods* and HealthKeepers, they sell baskets of products from multiple manufacturers – there’s no one manufacturer who makes everything that, from a public health point of view, you would want to be selling, like condoms, or zinc, or bed nets. So it requires somebody at an intermediary level to go in and assemble that basket, and then get centralized distribution and warehouses that they can move out to the more rural districts where they’ve got their sales force.

And that can be expensive, so one of the things we’ve found is that this model is usually easier to afford if it’s coming from the product manufacturers themselves, who’ve got the margins on the products to do it. It takes out a lot of the leeway for pricing if you need to have a third party intermediary assembling all this from the manufacturers. But the manufacturers themselves will never assemble the right basket from a health perspective, so it’s a bit of a dilemma.

JM: With all the complexities of this model, why not just sell health products through whatever local shops already exist? 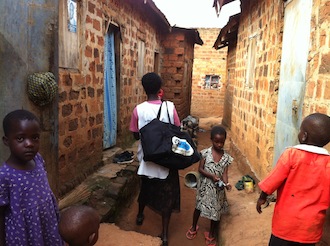 MK: There’s usually a local village shop in most of these areas, but sometimes it’s a three to four mile walk for people. And so people – particularly women who have low status in villages – don’t always get out. We’ve done similar research in India, which shows that when it comes to actually going out to make purchases for important health goods, including condoms, that is often left to the husband. The thinking is, if you bring the product and the education that goes with it to people’s doorstep, that should improve both adoption and health behavior. So it’s not just selling, it’s also informing the consumer.

But there are other efforts to just upgrade local shops with exactly the same objective – for example, training the local chemist to do the same kind of education. And in fact, HealthKeepers was looking at a hybrid model, where they would send sales agents out from the local licensed chemist in Ghana to do that. When we last saw them about a year ago, they were starting to experiment with that model.

(Above: A Living Goods sales agent on a house visit in Kampala. Image: Josh Cleveland)

JM: How important is mobile tech in managing a sales force and tracking client interactions?

Mobile tech is great for inventory tracking, and keeping in touch with consumers who’ve got mobiles themselves. But in Monitor’s analysis, it’s not going to be the difference between success and failure in models like this.

MK: It depends on if you have commercial or social objectives, and which is the priority. But the three main things I would say are: first, you need to pay attention to your combination of product, margin and pricing. If you have commercial objectives, then you’d want to adjust your pricing to be market-based, and your product mix would look different. You’d pick the more profitable products, you might pick less rural consumer bases and go urban, there’d be a bunch of things you’d do differently that flow from that set of strategic choices.

JM: If there’s not traditional media advertising available and it’s too time-consuming for agents, what other options exist for demand stimulation?

MK: Well, in the health space in other countries, like India, they run health camps and do screening for people around specific issues – that’s how Aravind Eye Care generates most of its customer base. That’s a low-cost way to get large numbers of people screened and sensitized to the fact that there may be an issue.

There’s radio, there could be SMS-based advertisement for certain audiences that have mobile phones. And there could be broader sorts of health awareness campaigns, which you would want to try to get the government or donors to fund as a public good. Find other ways that are not necessarily embedded in your cost base to do demand stimulation.

JM: Do companies need either government or foundation support to create demand for them or help defray other expenses? Or do you think that this model can be sustained just through sales of socially beneficial goods?

MK: I think it can be, for sure – depending on your mix of training costs, your product basket and your volume. The higher volume you get, the better your negotiating power with your product suppliers.

But it depends on who you target. One of the findings in our main African report was that the businesses that were successful didn’t just target the poorest segments. They actually had a mix of consumers who were middle class, lower-middle class and base of the pyramid. So there are ways to do it, and I think the agent networks we saw are experimenting with some of these approaches currently. I’m quite confident that somebody will figure out a way to do this profitably.

* Disclosure: the Omidyar Network is an investor in Living Goods.