According to the World Health Organization, 626 million people in India practice open defecation. That’s more than twice the number of the next 18 countries combined. It’s a huge problem that Namita Banka is trying to solve.

Banka, a former jewelry designer, took a course in social entreprepreneurship in 2009 and emerged ready to make a difference in her community. She incorporated Banka BioLoo in 2012 to produce environmentally friendly bio-toilets. The toilets use technology developed by India's Defence Research and Development Organisation – a bacterial culture converts waste into water, methane and carbon dioxide – and they can be located where there’s no infrastructure for traditional toilets. Banka BioLoo now manufactures, installs, maintains and even rents “bioloos.”

Below, Namita’s husband Sanjay, who is CEO, answers a few questions about the business and the cultural obstacles that must be overcome in efforts to stop open defecation in India.

Kyle Poplin: What services does Banka BioLoo provide and what is your target market?

•  The need for a basic, easy-to-install and hygienic human waste disposal mechanism in areas with no infrastructural facilities currently, such as sewerage treatment plants.

•  The need for a cheaper and easy-to-operate alternative to the traditional waste disposal system.

The target market is the vast populace, primarily in rural India, with little or no access to toilet facilities. We seek to address the malaise of open defecation and counter the ill-effects of that. Indian Railways, too, wishes to replace the existing open-chute toilets with bio-toilets, leading to clean tracks. Primary schools, which lack or have inadequate toilet facilities, are in the process of implementing bio-toilet systems, as these are most cost-effective compared to conventional toilets. Construction and infrastructure companies are another strong client base; the “bioloo” is an effective sanitation system for the onsite workers. 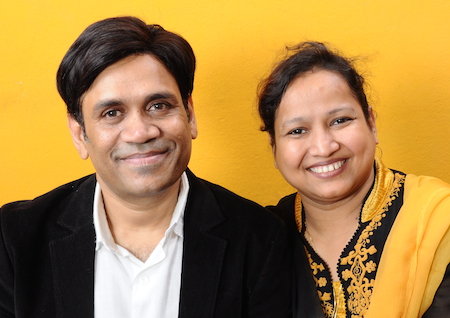 SB: Banka BioLoo was founded and is led by Namita Banka, who espoused the cause of adequate sanitation for women. The womenfolk are the larger sufferers due to the absence of sanitation – their security and dignity are both are at stake, apart from health. More girls drop out of schools than boys, when schools don’t have toilets. Only a woman can understand these aspects, and entrepreneurs such as Namita stand up and do something about it.

Traditionally, businesses have been led and managed by men, the world over. Things are changing, and the developed nations have taken a quantum leap in this respect. Women – and I guess it’s common across the developing world – face the unique challenge of making a mark for themselves in the men-dominated business arena. Access to banking channels, credit facilities, dealing with vendors and clients – all these are not easy for a businesswoman. As society and the economy are primarily dominated by men, women don’t find the going easy. But times are changing, and the hurdles seem to be reducing. Today, Namita is seen as a strong votary of adequate and improved sanitation within the governmental and corporate arena.

KP: What makes your firm different from others in the human waste management business?

SB: Banka BioLoo, today, is a significant brand in bio-toilets. We have built strong capabilities across the value chain, through manufacturing and production of all components of the system, and adequate installation teams. The company has a reliable and dependable team that has ingrained the processes and the know-how. We are the only company that can cater to all market segments in green sanitation – be they households, schools, railroads, construction sites, etc. We have product and service offerings, both. We have installations in 17 of the 29 states in India.

KP: The Indian government has a goal of ending open defecation by 2019. Is that possible?

SB: Ending open defecation sounds challenging by 2019. Nearly half of India’s population doesn’t have toilets. It’s a humongous task to build millions of toilets and will require a number of years before that’s achievable.

KP: It's been said that solving the problem is as much about changing habits as building lavatories. Do you agree?

SB: Absolutely! Without behavioural change and adapting to defecating “in an enclosure,” the infrastructure would be wasted. Among the open defecators, we mainly have two categories – one that has to do it in the open because they don’t have a toilet and their economic condition is tough, and the other set of people who “like” doing it in the open to enjoy the fresh air of the morning. They are oblivious to the pollution and the damage that their fecal matter causes, and not too concerned about the health impact.

The governments, NGOs and other organizations are working in this direction, and through campaigns and other activities are trying to sensitize the people at large, to build toilets and to use them.

SB: We don’t have a “partnership” with the government but do work with government agencies in providing sustainable sanitation. We would like the government to play an enabling role in the field of social uplift. Partnering may not be necessary for that. For example, the government can support in ensuring that the private sector, and notably the small and medium-sized enterprises, get adequate help in building toilets.

KP: Describe some of the frustrations of being in the human waste management business in India.

SB: India is on top of the chart in human waste management needs, given the momentous number of open defecators. The country is also beset with lots of taboos about engaging professionally in this sector. Not many, among the affluent sections of society, want to have a human waste venture. Despite these odds, we persevere.

Support from the government establishment is not very high. Though a number of policies have been framed – and on the face of it there’s enough hype about “Clean India Mission” ("Swachh Bharat Abhiyan") – there is a lot of inaction as far as real support to private-sector entities is concerned.