A Sector in Transition: How Data and Evidence Can Set India’s Agricultural Markets on the Path Toward a Successful Future

As policymakers look to optimize the agricultural sector, they will need synthesized data to inform their policies. This is the second in a series of articles by IDinsight, that provide analysis of existing data and draw attention to gaps for researchers to fill in over the coming months. The first article can be read here.

Farmer protests in New Delhi have dominated headlines in India in recent weeks. An estimated 250 million farmers are protesting against a series of Indian farm bills that were passed into law in September. Much of the anger has come in response to the Farmers’ Produce Trade and Commerce (FPTC) Act, which fundamentally aims to shift the structure of agricultural markets away from traditional state-regulated market yards (mandis) and toward a more open market system.

Historically, sales of agricultural goods in India have occurred under a tight regulatory scheme. These regulations were set up to reduce the risk of exploitation of farmers by local middlemen who could otherwise offer unreasonable prices and use other coercive techniques to instigate sales. Generally farmers were required to sell their produce at mandis that were regulated under state marketing boards, which meant they were selling only to people who had a license to buy inside those mandis. Over time, many of these mandis have come to be dominated by licensed traders who procure agricultural goods from farmers and sell them to retailers locally and around the country. Many argue that the market power of these traders has led to increased transaction costs, higher prices and slower food supply chains.

The central government argues that by reducing regulations on agricultural transactions, the new FPTC Act will establish alternate sales channels for farmers, leading to increased farmer wealth. Experts may differ on whether the FPTC Act will indeed “free” the Indian farmer and revolutionize agriculture, or lead to further exploitation of already impoverished smallholder farmers. But there is widespread agreement among economists that India’s agricultural systems are in need of reform.

This article outlines the underlying challenges facing India’s agricultural market systems, the pros and cons of the government’s approach, and the ways that data and evidence can help leaders set agricultural markets up for a successful future.

There are three underlying challenges that the agricultural market systems in India seek to overcome:

Market systems seek to overcome these challenges by providing support through regulations, and by facilitating efficient price discovery and, consequently, fair sales prices for agricultural products. Through efficient transactions at fair market prices, the exploitation of sellers is minimized and prices reflect market forces.

But given the diversity of India’s agricultural sector, there is no one-size-fits-all market solution appropriate for all crops and all geographies. A recent study undertaken by our team at IDinsight, in collaboration with the Development Data Lab, highlighted these major differences (as shown in Figure 1 below). This data was collected by IDinsight’s Data on Demand service via phone surveys with over 4,500 Indian households, and it illustrated the variation in sales avenues across different states. For instance, Figure 1 shows how certain states, such as Madhya Pradesh and Rajasthan, distributed over 40% of agricultural goods through state-regulated mandis, while other states, such as Bihar and Uttar Pradesh, distributed less than 5% through mandis. 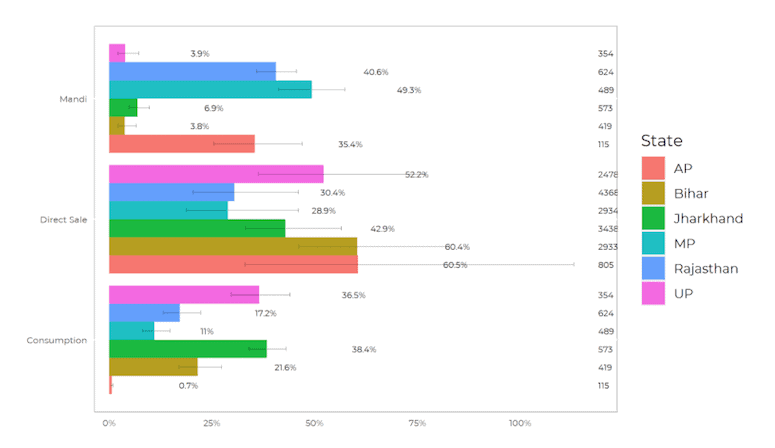 Proponents of the FPTC Act argue that deregulating mandis and leveraging market forces is the most optimal way to overcome the three persistent challenges of India’s agricultural market systems that we outlined above.

Critics of the FPTC Act assert that the new law mischaracterizes existing issues with mandis, does little to address these core challenges and could lead to increased exploitation of farmers at the hands of large, private corporations.

Whatever the strengths or weaknesses of these various arguments, one thing is clear: As decision-makers seek to forge a path into the new agricultural market future, data will be vital in setting up appropriate market systems. Below, we’ll discuss how data can address each of the three core challenges these systems are facing:

The new agricultural market future has arrived in India. And while no one-size-fits-all market system is appropriate, it is important that the leaders designing and implementing new models deeply understand the needs of farmers and purchasers, and leverage data and evidence to facilitate sustainable and equitable agricultural growth. If they do, the systems they build will set the country’s agricultural sector – and the farmers and other stakeholders who depend on it – on the path to greater success.

Rupika Singh is a Senior Manager, Praachi Khera is a Senior Associate, and Tony Senanayake is a Manager at IDinsight.