Day 3 at the BoP Summit: The investment community’s 2 cents, the roadmap work begins

Wednesday was the final day of WDI’s “BoP Summit 2013: Creating an Action Agenda for the Next Decade,” but it also was the first step towards advancing business models and funding mechanisms for the base of the pyramid.

These first steps came at the end of the three-day conference as nine working groups began piecing together a roadmap to chart the future course of the base of the pyramid (BoP) domain. The collaborative roadmap was one of the main objectives for conference organizers, who hoped the exercise also would build a stronger and healthier BoP community of leaders and thinkers.

Several concurrent and plenary sessions on important issues facing the BoP sector gave the nine working groups some ideas on how to plot the roadmap.

On Wednesday morning, the summit’s final plenary “Funders’ View: From Ideas to Action,” assembled representatives from a handful organizations with household names in the development community: USAID, IFC, and the Citi Foundation, among others.

The panel reflected on the vast progress in the base of the pyramid field – in concept, in practice, and ultimately, in poverty reduction.

One by one, the Millenium Development Goals addressing extreme poverty are being achieved, incomes are growing, and many conference attendees talked optimistically about putting poverty, and themselves, out of business. Panelist Alonzo Fulgham, the former acting administrator at USAID, noted that seven of the ten fastest growing economies are in Africa, and the other three are in Asia.

“That’s transformational change, and we’re going to have to do things different,” he said. “Transformation takes years; (we) need to think about bigger picture.”

The business/development community will need to align objectives among partners and within partners to elevate the BoP. A lot of different parts of large businesses must have buy in, and if the objectives aren’t aligned within an organization, the partnership will stall and won’t be sustainable, Fulgham said.

“You hear a lot about CSR (corporate social responsibility)…but don’t kid yourself, it’s about whether your objectives align with funders’ objectives,” Fulgham told the mostly business-aligned crowd at the summit.

Fellow panelist, IFC Global Program Manager Eriko Ishikawa, said in the last 10 years the investment vehicle of the United Nations has placed more than $1 billion (in debt, equity or other investment instruments) in what it considers BoP businesses. Two-thirds of those clients are buying from local suppliers, Ishikawa said. She mentioned the example of one company that exports vegetables and flowers from Kenya to hundreds of retailers in Europe, a business that was launched with IFC subsidies.

“Subsidy is not a dirty word…We have to subsidize many things because the market is not there,” she said. “But eventually you’ve got to wean the new enterprise from the subsidy.

“Your mission is important, but if you’re not going to be sustainable your impact is going to be very limited,” Ishikawa added.

“Where we are now is about business model innovation,” he said. “Effectively what you have now is a whole bunch of companies doing a bunch of different things and you can’t make a monolithic statement about them.”

Macmillian said funders need a better sense of who are the decision makers within companies.

“Funders increasingly are able to fund platforms (for BoP customers),” he said, citing the case of the Better Than Cash Alliance. “There is not enough funding in the world to fund each and every one of your organizations.”

That means things have to change, not only in the world of philanthropic capital, but in terms of how startup social enterprises consider their approach to private sector finance or how they structure their operations, he said.

After the plenary session, members of the nine working groups continued discussing successes, challenges and potential next steps for each of their topics. Near the end of the conference, representatives from each group gave a short presentation on the group’s findings.

The nine working groups are:

The group tasked with thinking about how to build ventures that incorporate the local context said it is important for venture developers to enter a community with humility and a willingness to learn and understand. They should then let that local context help drive the project.

For next steps, the group said it was simple: Go there, be there. Then value co-creation, identify basic needs and wants, and think about long-term sustainability.

For the “social performance” working group, they said there is a need to measure impact to show progress. Some of the suggestions the group had to advance the field included writing a manifesto that documents the range of approaches; creating a center of excellence to generate knowledge and learnings that shorten the time to success and advances the field; and develop a platform that enables community collaboration. 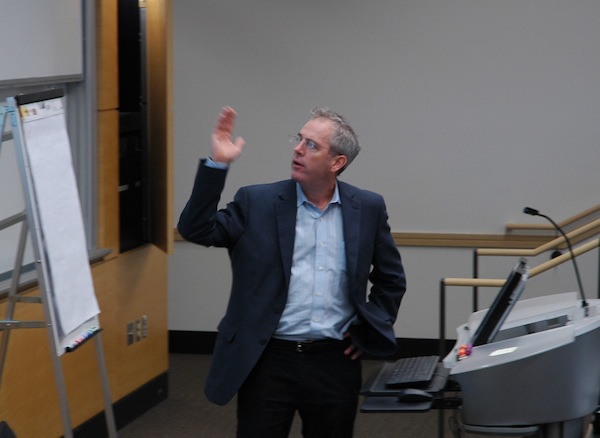 The “new venture development” group said that new venture growth models are unique. But going forward, the group said to set expectations for growth stages (a flatter S curve) and success indicators (e.g. break even). The group also would like to see an evening out of the distribution of capital and resources directed at different stages of growth.

The “Multinational Corporations and the BoP: Seeking Scale” working group mentioned several internal and external challenges to scale. One internal challenge is establishing a clear set of metrics at the start. A possible solution would be to create new metrics that are verifiable by an external source. For next steps on this issue, the group said MNC collaborators could develop a framework for three types of BoP metrics: economic impact (sales); economic impact of capabilities; and social impact.

(Left: Chris Jochnick, director of the Private Sector Department at Oxfam-America, leads one of the summit’s working groups.)

The group said an external challenge is the difficulty of finding appropriate partners. A solution could be companies investing in partnership capabilities. Potential next steps for this challenge could be creating a knowledge hub on the NextBillion platform, and a forum for people to interact.

Conference organizers said they will do a thorough debrief of each working group’s strategy sessions and final presentations, and share the results with summit attendees and the larger BoP community.

NextBillion will post future articles about the details of these presentations in the coming days.