Editor’s note: As part of our Most Influential Post of 2015 contest, we are re-publishing the articles that made you think, made you act, or maybe even made your day. This article was the most-viewed post on NextBillion for September 2015. To see the full list of the most popular posts in 2015 and to vote for your favorite, click here, or simply scroll down to cast a ballot.

This month, the United Nations will celebrate achievement of Millennium Development Goal No. 1. The number of people living in extreme poverty has fallen by more than half, from 1.9 billion in 1990 to 836 million in 2015. How did this happen? Is it because of targeted anti-poverty programs, or is it due to broad-based economic growth, especially in China and India? If economic growth is the main cause, as it seems to be, further progress may be doubtful. Economic growth alone is unlikely to reach the residual hundreds of millions still living in extreme poverty.

Nor is it likely that anti-poverty programs, whether public or private, will lift this “bottom billion” from extreme poverty. For example, the U.S. poverty rate hovers around 15 percent of the population, nearly unchanged for decades, despite the hundreds of billions of dollars spent on U.S. anti-poverty programs. For another example, in poorer countries, microfinance was billed as a self-financing solution to deep poverty and became a darling of international development donors in the 1990s and “social investors” in the 2000s. Then smart social scientists tested the claims with sound field research and found little to no impact on poverty.

Is it reasonable, however, to expect anti-poverty programs, by themselves, to lift large numbers of people above an arbitrary poverty line? Given that the poor must overcome many burdens before they can seize whatever economic opportunities are available, perhaps we should ask a different question:

Do anti-poverty programs ease the burdens of poverty?

While the recent research into microfinance shows little to no increase of annual household income, on average, the same studies very often show that the burden of poverty is alleviated by giving microfinance participants access to money when they really need it during the year. Economists call this impact “consumption smoothing.” In plain terms, it means people get enough to eat throughout the year instead of going without adequate food for a day, a week, or even months at a time. If so, this is an impact worth celebrating, is it not?

Even with this more modest and realistic expectation, some anti-poverty programs are effective and some are not. We know this from our collective experience in anti-poverty work, with more than 70 years between us. We know the challenge is to distinguish what works from what does not. It is better to seek out “pro-poor” rather than “effective” anti-poverty work, because there are gradations of effectiveness. All programs have room to improve. “Pro-poor” programs actually strive to improve toward greater effectiveness. Transparency and accountability are not just about separating wheat from chaff; they are about improving.

How can we fully distinguish pro-poor programs from those that are not?

In a volunteer initiative called Truelift, leading thinkers of the “social performance” movement in microfinance (seeking social as well as financial return on investment) have hit upon a truth that applies to all anti-poverty work: Truly pro-poor programs provide the right answer to each of three straightforward questions.

First: Does the program work with people living in poverty?

Straightforward indeed! But how do you know a person living in poverty when you see one? More important: How does a program know them, recruit them, include them and keep others who are not poor from co-opting what the program offers?

Too many anti-poverty programs cannot answer this question. Regardless of legitimate reasons, these programs are flying blind in their poverty outreach and, therefore, their potential to impact poverty. “Blind” programs may be “wasting” precious resources on the “wrong” people – even though much good may be done. Such programs are not entitled to the “pro-poor” label – they need a different justification. Or they can get serious about knowing the poverty status of the people they work with.

Second: Does the program design and adapt its services specifically for people living in poverty?

The staff of a pro-poor program changes and adapts the services and products they offer – intentionally and systematically, always listening carefully to people living in poverty and being clear about the benefits the program seeks to provide them. It is basic good business practice – know your customers, listen to them, design for them, satisfy them. 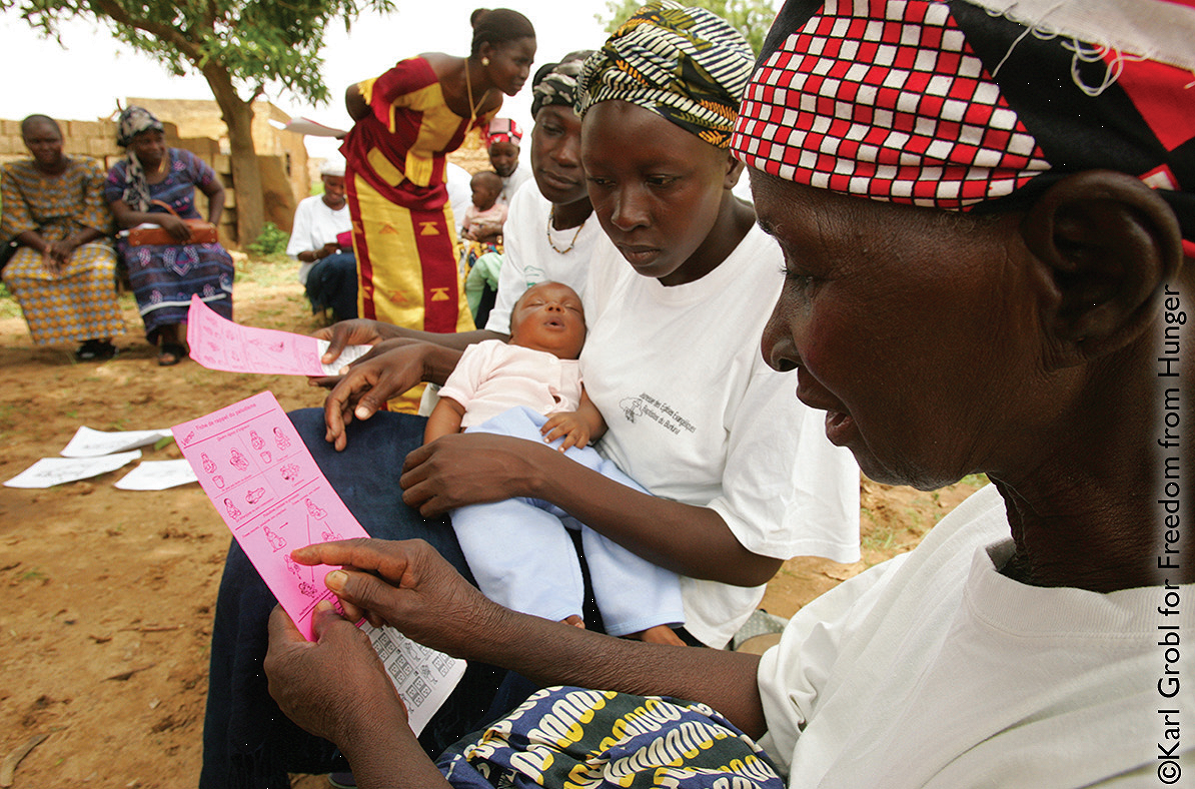 Above: The Réseau des Caisses Populaires in Burkina Faso (RCPB) discovered while providing savings and credit services to groups of rural women that they wanted information about how to prevent and treat malaria, a disease that kills children and robs adults of far too many productive work days. At left, an RCPB animatrice (field agent) shows a women’s group how to understand the symbols on a take-home card that shows illiterate people how malaria is prevented and treated. (Image credit: Freedom from Hunger and Karl Grobl)

Third: Does the program track the progress of the people using its services?

It is not enough to reach out to people living in poverty, and to design and adapt services to suit their needs and constraints. We must have some evidence that our work is helping them move in the right direction, even if not all the way to the intended destination. This is not just to show that our work is worthy of the money spent, but also to know how to improve our work. We need “real time” information about change in clients’ lives.

We operate programs in a world where sophisticated research into cause and effect is rare and likely to remain so. Logic, experience and some evidence indicates that programs providing the “right” answer to each of the three Truelift questions are likely to show positive impacts on people living in poverty, if and when sophisticated impact research is done.

It is not too difficult for managers, donors, investors, regulators and business leaders to ask these three questions and know when they get good answers. We can know a pro-poor program when we see one – and act to support it.

Chris Dunford and Carmen Velasco are co-chairs of the Truelift Steering Committee.