Editor’s Note: The following post is part of NextBillion’s series in partnership with Ashoka focused on affordable housing issues. Please follow the entire series HERE, and join the discussion with your thoughts and insights.

In a section of Port-au-Prince, Haiti, the community of Simon-Pelé and its 23,000 low-income squatter residents had de facto security of tenure and had built a vibrant commercial main street and strong social connections. Its lack of formal municipal and legal recognition meant that despite its residents’ efforts at improvements, Simon-Pelé did not get public services such as water, sanitation, sewers, latrines, solid waste disposal, street lighting and social amenities such as schools and playgrounds. Many streets remain unpaved. Diseases such as choera spread easily and often.

When hit by the 2010 earthquake, like many Haitian neighborhoods, its residents suffered devastation. At least 8,000, over a third of its residents, live in one of eight camps surrounding their former neighborhood.

Communities like Simon-Pelé present many challenges, all magnified by the earthquake. Individual plots are small and irregular, and houses are self-built from salvaged materials. This makes it almost impossible to rebuild structures from scratch. High density and narrow streets mean housing and infrastructure work affects groups of households, so it is difficult to help one household at a time. Most importantly, the strong social bonds created by a shared history of informal settlement and survival mean it is important to create a process that all residents believe will meet their needs over time. Isolated projects, by contrast, could create jealousy and division.

Recognizing these challenges, Habitat for Humanity Haiti decided to use a tool developed by Shack/Slum Dwellers International: a community-based enumeration (survey) process that would help the community take stock of its resources, prioritize its needs and develop plans of action to address them. In so doing, the community would take ownership of the process and have clear priorities to work in partnership with government and NGOs to address its needs. Although the project is still at an early stage, community teams have mapped and numbered 4,000 buildings, and surveyed 6,000 households in Simon-Pelé.

The Simon-Pelé enumeration is based on a standardized set of questions developed by a working group of Haiti’s Interministerial Committee for Territorial Planning (Comité Interministerial d’Amenagement Territoire, CIAT.) This ensures that the information gathered is compatible with other organizations’ neighborhoods surveys. The working group hopes to collect and compile such surveys on a citywide scale for all of Port-au-Prince. 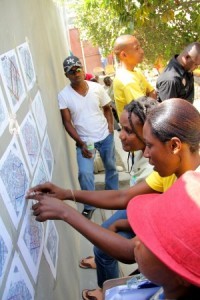 The enumeration process involves forming and supporting community-based survey teams; numbering and mapping buildings; surveying every household for information about demographics and economic activity; and focus groups to create community maps and use them to decide which needs are most urgent. Local university architecture students help with training, verifying and compiling the data into a database. The process is punctuated by community mass meetings and celebrations designed to cement broad commitment to the process.

Interestingly, the first priority identified by the Simon-Pelé enumeration was not housing repair or reconstruction, but safe water. Two community water points are now under construction. Two more projects are expected to start in the next few months to add street lighting – especially important to women’s groups for safety – and solid waste management.

Nevertheless, the Simon-Pelé project is creating the basis for housing interventions, including upgrading existing houses so they are earthquake-resistant; repairing and retrofitting earthquake-damaged homes; and building new permanent homes on vacant land. HFH Haiti also is building transitional shelters in or near Simon-Pelé and partnering to clear rubble with the Community Housing Foundation International (CHFI).

For Habitat and the community, however, the surveys and focus groups are tools for building more than housing in Simon-Pelé. The enumeration methodology builds community self-confidence, creates a platform for ongoing engagement with the community as a whole, and initiates post-earthquake reconstruction in a way that builds on existing community capacities, both physical and social.

Vilaire Syrin, 29, a team leader in the enumeration, has lived in the community for 27 years, and says the survey process “is one the best things that Habitat has done.” By leading the work, his confidence, organizing and leadership skills increased strongly – particularly important in a neighborhood whose residents have long been stigmatized as “illegal” residents of the city.

In addition, the Simon-Pelé enumeration has caught the attention of the municipality and other NGOs in a positive way. It has helped attract funding, and strengthens the neighborhood’s acceptance as an integral part of the municipality – particularly important when it comes to regularizing tenure. 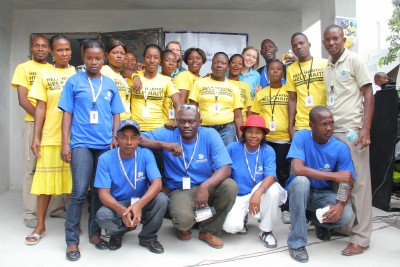 From Habitat’s perspective, the Simon-Pelé enumeration has further benefits. The quality of information about affordable housing is more accurate and richer using an enumeration process because people tend to share more, and exaggerate less, when talking to neighbors. More accurate data and deeper community engagement increases the efficiency and effectiveness of specific housing project design. The resulting pool of trained and committed local residents serves as yeast for future work, both within Simon-Pelé, and for other neighborhoods in need of the enumeration process.

Mésina Antoine, 73, a charcoal retailer who lives in the community with her four grandchildren, says she’s feeling better about the neighborhood after the earthquake’s tough times, and has begun to look forward. “Now I’m praying for my grandchildren to have a better future in a much better, safer place.”

Through this community-building process, the area now has a critical mass of aware and empowered residents capable of organizing for change so that Simon-Pelé is a better, safer place for all Haiti’s children.