Failure to Launch: Why Mobile Money Hasn’t Taken off in Nigeria – And How the Sector Can Turn Things Around

Five years after the passage of the 2009 Regulatory Framework for Mobile Payment Services by The Central Bank of Nigeria (CBN), digital finance (mobile money/agent banking) has yet to take off in Nigeria.

A nationally representative survey of Nigerians, conducted by InterMedia in 2013, found that only 0.01 percent of Nigerians have a mobile money account. Critics note regulation in the country prohibits telecoms from taking the lead in the rollout of digital finance as they have in East Africa, and suggest the lack of progress is due to their lack of involvement. Banks like EcoBank and FirstBank (as well as third party providers like Paga) are leading the charge, but are still plagued by some fundamental issues.

The Helix Institute of Digital Finance recently finished qualitative research on work being done around the country. The ironic finding is not a lack of initiative by providers, but rather that they are doing so much that they do not have the bandwidth to execute strategically. Providers have jumped to try to scale quickly without first sitting down to design processes, structure management, and bring clarity to their value proposition. Once these tasks have been completed, the focus becomes scale, and here telecoms have a big advantage because they already have more customers, large marketing teams and budgets, and extensive experience in network development and distribution. However, scale is not the primary problem in Nigeria right now – it is the lack of strategic clarity that results from skipping this first developmental stage, which we term the “Launchpad Stage”.

Agents and products everywhere, but quality and strategy limited

On the product front, providers are engaged in government to person (G2P) payment programs in rural Nigeria, they are offering bill pay opportunities in urban areas, airtime top-ups on the handset, and advertising person-to-person (P2P) payments on national television. However, robust market research and sophisticated customer segmentation has not been done to ensure that products are positioned for the right customers. This is leading to market confusion, where the average Nigerian is still very unsure what digital finance is, and how it solves a pressing problem for them.

In September 2013, the Central Bank of Nigeria reported 67,494 agents had been on-boarded by providers, while The Gates Foundation did a census of financial service touch points that year which found only 3,275 mobile money agents (5 percent), indicating extremely high levels of inactivity in agent networks. The Helix research confirmed that agents are reporting very low revenues, are frustrated with the lack of quality of provider support, and are unclear how they are supposed to pitch the growing arsenal of products to customers. Dissatisfied or dormant agents, together with the high levels of system downtime in Nigeria, are undermining trust in digital financial services.

Providers are desperately dealing with angry agents, while trying to sell a wide range of different services, leaving them to triage a battery of operational challenges without bandwidth for strategic progress.

Starting small is the key to growing big 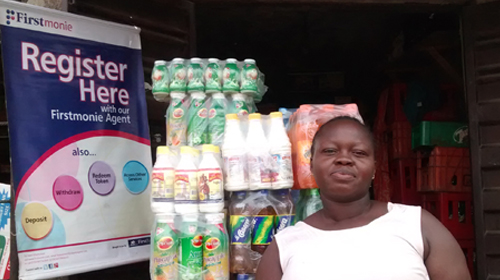 The great irony of digital finance is that the overall business model depends on large scales of customers and volumes of transactions served by tens of thousands of agents. However, those who ignite this flame of growth too soon, get caught dashing around to control its burn as its increasing scale compounds small problems until they become crippling issues.

The key to successfully growing big is starting small with a “Launchpad Stage,” which first focuses on quality NOT quantity. It should involve only a maximum of a few hundred agents, with the objective of defining the anchor product, and streamlining all processes and protocols. In a large country like Nigeria, it should have a geographic focus. It should not include agents who manage a group of sub-agents. Those are tools for management of networks at scale, and bringing them in too early will only leave them lurking around the business model trying to find profits that only come into existence later when scale is introduced.

M-PESA in Kenya had a “Launchpad Stage“ that is not often acknowledged. It started in 2005, and lasted for about two years. It was run as a pilot with only eight agents and about 500 customers, and the focus was on learning and gathering information to improve the quality of the service, and the clarity of the value proposition. This was an essential process, as they ended up entirely changing their value proposition from a microfinance solution to a person-to-person transfer service. This Launchpad phase allowed them to solve problems while they were still small, and then scale solutions to them strategically as they sequenced in agent infrastructure to support it. 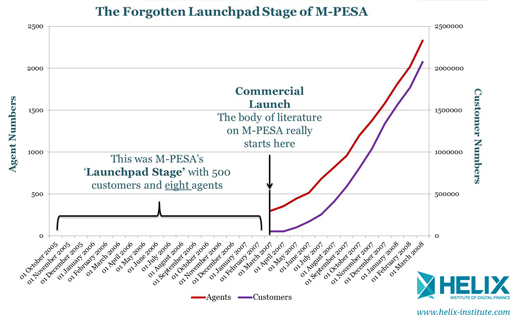 Unfortunately, skipping the Launchpad Stage is a common oversight. However, by now many Nigeria providers should have a treasure trove of data they can mine to figure out which products have been used by which customer segments, that they can use to help them complete this first stage of development. Since the Launchpad Stage does not involve scale, banks should be as adept as telecoms at completing it successfully. Banks, however, have different initial sources of strengths than telecoms, which they will first want to leverage.

Generally in all developing world countries, a telecom will have an order of magnitude more customers than the bank. However, that is not relevant in the Launchpad Stage. Banks need to first focus on their strengths, in terms of finding a value proposition for customers, and the large ones will want to start with the customers they already have. Banks have mostly served upper class clients for hundreds of years, but those clients run companies making and receiving an alluring number and value of payments. These financial institutions need to help customers send those streams of salaries, bill and retail payments to mobile wallets. The GSMA’s Mobile Money for the Unbanked initiative shows bulk payments were the fastest growing product in 2013. Banks also should direct the lower value customers crowding the banking halls out to the agents, thus legitimizing and building trust in the system and business for the agents.

Telecoms also have the advantage of large airtime distribution networks they can convert into cash-in/cash-out agents. However, this is also a secondary issue that becomes relevant when scaling. The Launchpad Stage is just for selecting your first few hundred agents, and developing an arsenal of processes, checks and balances around them. Many banks have a great way to do this too; the small and medium-sized enterprises (SMEs) that banks have as customers can make great agents. This is what bKash did to recruit their first few hundred agents, and where other banks we have worked with have also started.

Telecoms are designed for scale and have many advantages over banks for achieving it. But pursuing scale is a secondary activity, after the value proposition has been developed and core processes have been designed and tested in the Launchpad Stage. Banks are not at a disadvantage when designing a launchpad, and they should look to some of their existing core strengths to execute this phase effectively.

This is where many banks across the globe driving for scale are stuck, and why many need to take a step back and perform a strategy refresh in order to leap forward.

Mike McCaffrey is Head of Digital Financial Services and Annabel Lee is the Africa/Marketing and Communications Manager at MicroSave.

This post originally appeared on the The Helix Institute of Digital Finance blog.