Innovative Banking Strategies for the BoP in India: Exploring ‘No Frills Accounts’ and the business correspondent model

For the world’s 2.5 billion people living on less than $2 a day, 80 percent of whom do not have access to a formal bank account, savings may seem like a foreign concept. Yet, in the book, Portfolios of the Poor: How the World’s Poor Live on $2 a Day, the authors reveal that, despite limited formal options, lower-income populations do engage regularly in savings behavior—from informal networks and family ties to sophisticated savings clubs. These numerous strategies help the poor to weather economic shocks, save for education costs for their children, and to pool resources together so that one member may buy the required supplies to start a new business.

In that vein, the Savings for the Poor Innovation and Knowledge Network (SPINNAKER) team recently launched a report entitled From Social Banking to Financial Inclusion: Understanding the Potential for Financial Services Innovation in India, which is preceded by similar papers covering Kenya and the Philippines. This research helps to provide insightful case studies for specific countries while offering broader insights into the savings landscape for the poor across the world.

India, for its own part, has the world’s largest unbanked population at 145 million households. The high cost of rural populations traveling to a nearby bank as well as cultural and psychological barriers among other issues has hindered many Indians’ ability to reap the benefits of the formal financial system. As such, the Reserve Bank of India, with financial inclusion at the center of its agenda, has been promoting two innovative strategies since 2005 and 2006 respectively: No Frills Accounts and the business correspondent model.

No Frills Accounts are characterized by having a very low (often times zero) balance requirement. With a total balance cap of around $1,000 (at which point the account must be converted to a normal bank account), commercial banks typically offer these accounts to lower income customers. The No Frills Accounts have simplified opening requirements in order to expedite the process, and it is estimated that over 100 million No Frills Accounts have been opened since 2005. Yet many customers cite long waits at the bank counter—which can ultimately result in a loss in wages due to cutting into work time—as well as other issues as serious barriers to the No Frills Accounts effectively promoting financial inclusion.

Since 2006, then, many commercial banks have adopted the business correspondent model, in which bank agents travel to areas with large unbanked populations to help open No Frills Account while also functioning as human ATMs by taking deposits and processing money transfers. This innovation has been particularly transformative in rural areas, where traditional bank branches are few and far between and where knowledge of how formal banking works is equally as limited. Consequently, trusting the business correspondents remains a barrier in this often high-cost, low-profit environment. Yet considering that bank branches are often times opened in these areas after initial contact with business correspondents, perhaps it is in this process of introducing huge populations to the concept of formal banking where business correspondents make their largest impact. 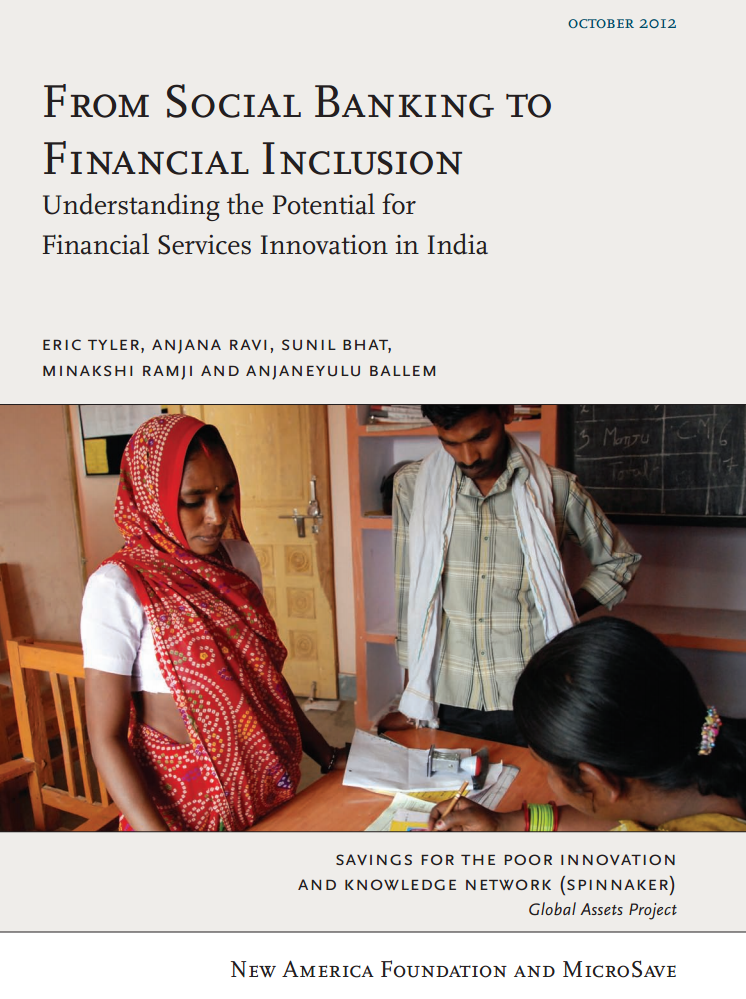 Regardless, it is still estimated that 90 percent of the No Frills Accounts in India still remain dormant, due in part to inefficiencies in regularly accessing the account. Fortunately, this may soon be changing with the rise of mobile banking. The Reserve Bank of India has stipulated that mobile network operators must partner with a bank in order to provide mobile banking services to customers, which is markedly different from the often cited M-PESA in Kenya, for example, which initially provided only store of value. The reach of mobile network operators coupled with a streamlined mobile banking platform may be a significant step in furthering the use of financially-inclusive savings products for the poor.

For years, many commercial banks throughout the developing world have struggled to see the profitability in working with lower-income clients whose deposits and accounts are of considerably lower value than their middle- and upper-class counterparts. In India, commercial banks have begun to comply with financial inclusion mandates, leading to innovative—though far from perfect—strategies to bank the poor. Yet even if promoting social inclusion may not be part of a bank’s business philosophy, the potential market for banking the global informal economy—estimated to be worth around $10 trillion annually—should speak for itself.

Understandably, the integration of billions of clients into the formal financial system is an enormous undertaking, requiring innovative and specifically tailored strategies for different countries and markets. As such, the new India report elucidates how the country with the largest unbanked population in the world has sought to financially include their 145 million unbanked households. In addition to offering further policy recommendations, the report is a valuable case study in analyzing several innovative financial inclusion efforts made possible by cooperation between the government and the private sector. Only through such targeted research can policy makers be sure they are promoting the most effective strategies for financially including the poor.

Tobin Fulton is a research assistant with the Global Assets Project at the New America Foundation.