Achieving ‘Resilience’: Financial services beyond the scramble to survive

“[F]inancial services, like clean water, sanitation, and electricity, are essential components of the prosperous life. Though an unlikely end to poverty, microfinance provides those services to the poor and it can be considered a success in the aid community. In what other sector has public and private aid helped build such businesses and business-like nonprofits at the bottom of the pyramid, which grow by meeting the market test every day?”

When the Microcredit Summit Campaign began in 1997, it was, as the name implies, focused on microcredit. Since then, the world of financial services for the poor has undergone a shift from microcredit to microfinance—a broader range of formal and informal products and services.

Resilience: The State of the Microcredit Summit Campaign Report, 2014 keeps up with the times by providing an interesting discussion of a number of innovations in the field of microfinance. The report focuses on resilience, and how financial services can promote it among the world’s poorest families. But it also covers a broad range of services that have the potential to help people grow—to lead the prosperous life that Birdsall mentions—much more than credit alone can. As Jake Kendall and Rodger Voorhies of the Bill & Melinda Gates Foundation (quoted in the report) put it: “In many…situations, the most important buffers against crippling setbacks are financial tools, such as personal savings, insurance, credit, or cash transfers from family and friends. Yet these are rarely available because most of the world’s poor lack access to even the most basic banking services.”

Reflecting this thinking, this year’s report signals a shift in focus from microcredit to microfinance in the Campaign itself. While it is not clear if this is due to a change in the focus of Campaign members from credit to other financial services, it does reflect the trends shown in the Campaign’s data. The 2013 report (which compiled data from 2011) showed a decline in borrowers for the first time; this year’s report continues to show a decline in borrowers among the poorest. 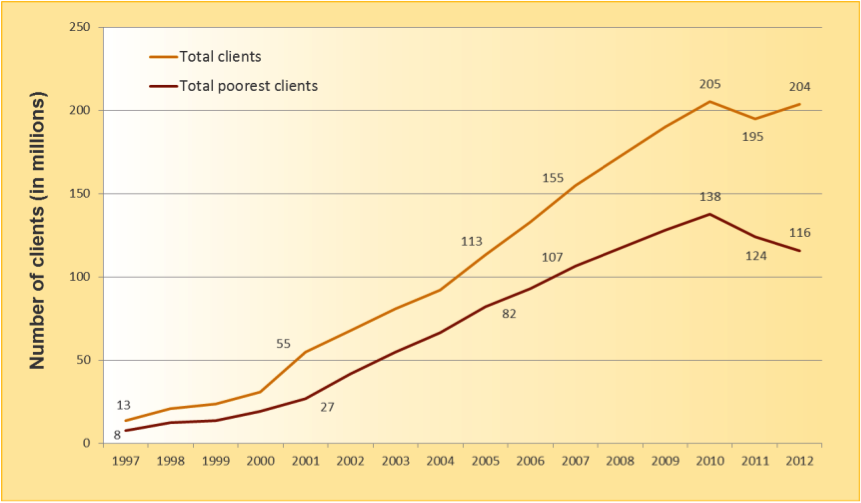 Given that the impact of credit on poverty alleviation may be exaggerated, and that it may even cause more harm than good, the Microcredit Summit Campaign’s broader focus is a welcome adjustment. Last year’s focus on vulnerability—and this year’s on resilience—remind us of the core reasons that we do this work: to provide a useful and beneficial service to people who have historically been excluded. We don’t need to throw the baby out with the bathwater, but we do need to take a critical look at our work and revise our objectives accordingly. As the report’s author, Larry R. Reed, points out, we need to ask, “How often—and how well—do MFIs reach those living in extreme poverty and supply them the type of financial services that help build resilience to withstand economic, medical, and weather-related shocks?”

While noting that it is less common for credit services to reach those in extreme poverty, Reed highlights actions from different regions of the world in which appropriate and affordable financial services can help people to prosper instead of scrambling to survive, such as:

The future of financial services that promote resilience and reduce vulnerability depends on institutions that not only innovate, but also practice self-reflection to ensure that they meet their social missions in a cost-effective way. While microfinance has seen its share of well-deserved controversy, the report offers a measured and realistic view of microfinance as an industry. No matter where you find yourself on the spectrum of ideology surrounding microfinance, Resilience is an interesting and informative read.

The 17th Microcredit Summit will be held from Sept. 3-5 in Mérida, Mexico. NextBillion Financial Innovation will be a media partner of the event.

Jessica Massie is a Senior Technical Advisor with Reach Global and lives in Kigali, Rwanda. You can reach her at jmassie@reach-global.org.