Financial Services That Work for Young People: How Social Norms Impact Financial Resilience Among the Youth in Africa

Descriptive social norms are unwritten rules that people follow unconsciously. These rules shape society and culture, and help differentiate one context from another. Social norms apply to people across age groups, but young people between the ages of 15-24 feel particular pressure to conform to them, as they’re in the process of building the foundations for adulthood and the responsibilities that come with it.

Social norms also shape people’s experiences in using financial services. But according to the findings of the Young People in Africa study, the opposite can also happen — i.e., financial service providers (FSPs) can influence social norms through the services they offer. The 2019 study — conducted by Scale2Save, a World Savings and Retail Banking Institute programme for financial inclusion in Africa supported by the Mastercard Foundation — included 909 stakeholders in Morocco, Nigeria and Senegal. It examined young people’s experience through a mixed research approach: financial diaries and macro quantitative data analysis, both complemented by qualitative research to better understand young people’s aspirations, support structures and financial behaviors. The findings suggest that FSPs have the potential to improve young people’s opportunities and resilience by offering services that foster more autonomy, decision-making and bargaining power, thus contributing to changing social norms in those areas. Below, we’ll discuss these findings and their implications for FSPs and their customers in Africa and beyond.

Most of the young study participants were economically active, preferred to diversify their sources of income, saved in case of unexpected emergencies and increased their savings in line with rises in income. Our research revealed that the formal financial system works much better for young people older than 18, which leaves many younger people marginalized by the sector. However, this does not mean that under-18s cannot benefit from being financially included: They also feel social pressures to grow their finances. Hence, young people — those aged 15-18 in particular — have found a way to negotiate these social pressures by accessing digital routes. In some cases, they are even closing the digital access gap between them and their older peers. In Nigeria and Senegal, for instance, it is increasingly possible to use the formal financial system’s digital infrastructure without owning an account or wallet in one’s own name, opening the door to greater access to digital products among young people who use accounts opened by their relatives. However, this is not possible in Morocco, where young people are disproportionately represented among the financially unserved population.

Data analysis based on Findex data (see table one below) shows that among all young people, regardless of the life stage they are in, digital access to finance is higher than access via an FSP, even by their mid-teens (age 15-17). Note: In this chart, digital access refers to both access to formal FSPs’ digital products (via an account opened by an adult) and digital access via their own accounts at mobile money and other non-FSP providers. 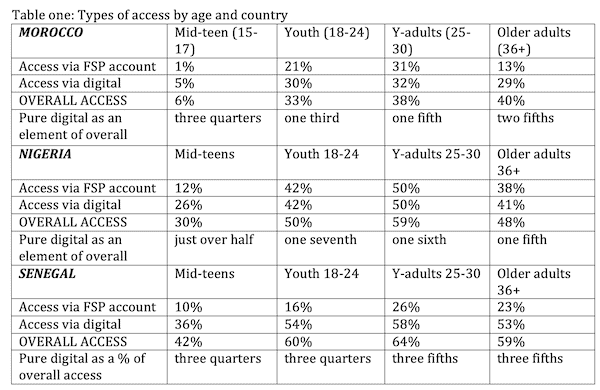 FSPs have proven they are capable of reaching and including vulnerable groups of the population, but they face challenges in assessing how social norms and expectations might affect young people and their inclusion. Our research finds two elements relevant to determining young people’s financial behaviors: social norms related to age and expectations related to life stages.

A typical household is made up of adults (parents or guardians), young adults, youth, children, etc., and the age of these residents naturally affects their position and roles in the household. These household structures influence financial inclusion and the social norms and expectations placed on young people by their families, friends and other community members. And these social norms are often first taught at home. Young people’s understanding of these norms — and the ages at which they adopt them — can partly be deduced by studying population pyramids that show the life stages of people in typical households, and when young people transition from one stage to the next. For example, the age until which young people are expected to remain in education is determined by how many young people, at any given age, are still in education and the age at which they usually lead their own household. Graph one below shows analyses of these household transitions for Nigeria and Senegal. 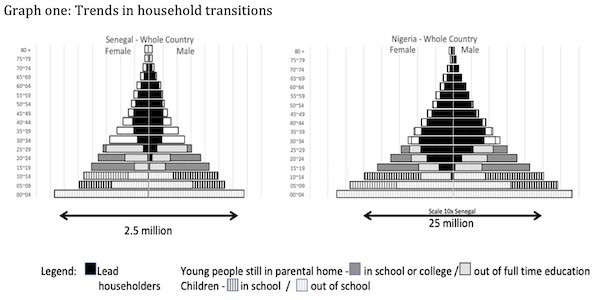 We found that the transition to heading a household, in line with increasing expectations to become more financially independent, starts around the age of 15 across the three research countries, and may continue well beyond the age of 30. This should encourage FSPs’ interest in actively serving people as young as 15, because social norms themselves do not appear to limit young people’s financial inclusion. Rather, social norms create pressures and expectations for financial inclusion as young people become old enough to head their own households, but young people are unable to meet those expectations because FSPs are hampered by regulations that hinder their ability to cater to their needs. For example, because FSPs in these research countries do not allow for the autonomous use of accounts by people in their mid-teens, young people cope with these pressures by accessing formal financial services through mobile providers that aren’t subject to those restrictions.

But though social norms can be seen as an enabler of financial inclusion for young people in general, they can also hold young women back from using digital finance, accessing sources of funding and becoming economically independent. For example, women in Morocco who feel free to work before marriage face social pressure to stop working after marriage because, they said, working while married suggests their husband could not care for them financially. This sort of social norm is sometimes validated and perpetuated by FSPs’ policies, hampering women’s access to finance and capital. For instance in Nigeria, these policies may even prevent young women who are employed from accessing loans, unless they are married and their husbands have a job. This policy approach suggests that social expectations are that all women should be married, and all husbands should have a job.

Likewise, social expectations in Senegal put pressure on young men to secure an income and achieve enough financial independence to head and support their household, which might include multiple generations. The expectation and pressure young men feel in Senegal increases with age, survey respondents said, because both the size of the household and occupants’ needs increase. Hence, FSPs could support young people better if they came to understand the ways these social norms impact financial inclusion at different customer ages.

But age alone isn’t the only factor that can impact financial inclusion in the communities we studied: Stages of development were also an important factor.

Stages of development are periodic phases that characterize developmental milestones and can alter a young person’s life trajectory, such as completing school, finding employment or becoming a parent. They can be categorized by age and are often gendered. The surrounding social context also influences how young people experience each stage of development.

For example, the parental household is typically a springboard for young people transitioning through life stages, from education to employment. We found that even among young adults (aged 18-25), parents remain a financial support mechanism and social norms partly influence how much of this support young people receive from parents. For instance, parents in Morocco supported their children attending university more than those not pursuing education, while in Nigeria and Senegal, financial support from parents decreased steadily over age groups, regardless of whether the children were pursuing education. This is because young people remain financially vulnerable during the initial stages of their growth toward independence, at least until they marry.

Marriage itself represents another key life stage that has an important impact on social norms and financial inclusion efforts. Once married, women in Senegal are expected to cook for the whole household. So young unmarried women have more time and flexibility to study or work full-time. This, however, was not the case in Nigeria, where both young women and men in our study agreed that marriage did not determine the limitations of young women’s work and financial aspirations (though as mentioned above, remaining single was a limitation in accessing loans). These social norms mean that young women in Nigeria are better placed to negotiate financial independence from their husbands, whereas young women in Senegal must adapt to new responsibilities after marriage that could impact their financial resilience negatively.

These findings suggest that financial service providers in these countries need a new approach to serving young customers and potential customers. To improve financial resilience and allow young people to benefit from opportunities, FSPs working to build digital services for young people must also take into consideration their life stage development and social norms. Generally, we find that FSPs are not very strong in customer-centric and outcome-focused design. This needs to change if they are to reach new young customers.

Such an approach will help FSPs understand how and under which circumstances young people’s resilience and opportunities are impacted by the expectations of their surrounding communities. The approach must include research to gain an understanding of young people’s realities and needs, which could inform the creation of detailed depictions of potential customer personas, market scoping exercises and customer journey maps. These methods must be based on young people’s experiences because the best way to understand them is by talking to them. By building this understanding, FSPs will be better able to support young people — and more likely to retain them as active customers in the long term.

Lise Paaskesen is an independent consultant at Lise Consultancy, and Weselina Angelow is program director at Scale2Save at the World Savings and Retail Banking Institute.