The clouds are gathering over Movirtu, and that’s a good thing.

Earlier this month, “Cloud PhoneTM” software company Movirtu announced it would be expanding in 2011 with an investment of $5.5 million. The Series A financing was led by TLcom Capital LLP and included Gray Ghost DOEN Social Ventures Coöperatief, U.A. Previously, Gray Ghost and the Grassroots Business Fund were seed-stage backers of Movirtu.

Movirtu’s Cloud PhoneTM is similar to a cloud-based Web mail service, allowing customers to log into either their phone – or if they don’t own one – to login onto someone else’s, in order to make a call. The service also enables texting and bank transactions, such as money deposits or transfers. Accessing the cloud costs subscribers the equivalent of 10 to 20 cents a call, depending on local rates. That revenue is split among the local phone operators, larger network operators that use Movirtu software, and with a small portion going to Movirtu. Compared with the cost of a $25 handset and monthly service, or the roughly $12 for a SIM Card to transfer from phone to phone, which is cumbersome for lender and borrower, the Movirtu solution is far less cost prohibitive for users earning $2 a day or less.

I caught up with Movirtu founder and CEO Nigel Waller who was visiting the University of Michigan as a guest speaker. Without revealing specifics, Nigel said the financing will help to expand Movirtu’s portfolio of offerings and will keep the firm on track toward reaching its goal of 4 million users by 2013.

“Primarily, what this is allowing us to do is accelerate our activities in the marketplace. So we’re now going into multiple countries in a much more quicker fashion than what we anticipated,” he said. “On the flip side, we’re also increasing our development activities in terms of our actual software development. We’ve got some new ideas and new products that are going to come through, and the money is going to be used for that.”

Movirtu, which has focused mainly in markets in Africa and South Asia, collaborated with frog design on a series of user interface educational designs for Movirtu’s MX series of products. The slides, written in English and Swahili, won the 2010 MEX Mobile User Experience Award.

Waller said the project has helped bridge language and literacy barriers, and build understanding for customers. 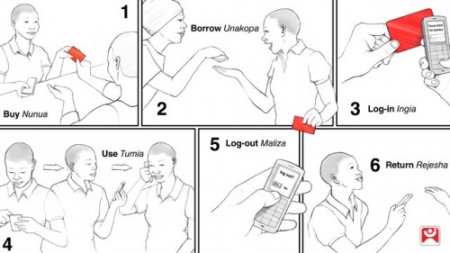 For much deeper background on Movirtu and Nigel’s journey in developing the company, check out Francisco Noguera’s excellent profile from 2009’s Pop! Tech, and/or check out the below video, which accompanies Francisco’s post.