For Nuru, Energy Applies to Products and Microfranchises

(Above: Esperance Yanfashije who along with her husband Martin Uwayezu, run a Nuru business together. They live and work in Ruhuha Sector, Bugesera District, Eastern Province, Rwanda. Image credit: John Briggs)

Nuru Energy faces the same problems that many alternative energy initiatives in the developing world face: kerosene is a dangerous, polluting, expensive, and non-renewable source of energy that leaves many families in poverty, some injured, and others in the dark. Nuru Energy, however, approaches this familiar problem in its own unique way with the Nuru Light and the Power Cycle.

The Nuru Light, seed funded by the World Bank in 2008 and serving East Africa and India, is innovative in its design; each battery re-charge affords a consumer 26 hours of light, which translates into five to seven days of use. Another of Nuru’s assets is that it’s designed to be incredibly versatile. Because energy is needed for all sorts of circumstances and occasions, Nuru’s designers created the product so it can be work on one’s forehead, perched on a flat surface, mounted on a wall or channelled though a plastic or glass bottle.

But what is an energy providing product without a dependable and continuous source of energy? The founders of Nuru Energy created the PowerCycle to address this necessity. The PowerCycle is a generator that recharges Nuru’s products as the pedals are pumped. In 20 minutes, one peddler can recharge 5 lights, and with new functionality, it can re-charge cell phones as well. The PowerCycle’s manual energy generation avoids the various pitfalls of weather dependant sources of energy such as sunlight and wind power.

Of course, one of the reasons that Nuru Energy is widely admired is its multi-tiered bottom line. The PowerCycle does much more than merely recharge the company’s products; it additionally benefits the community by providing jobs with its franchise model. As COO Julio De Souza put it: “We find and train these entrepreneurs ourselves. They are selected based on their business acumen, distance from the grid and roads, the population density of their immediate market and the kerosene price in their area. Through trial and error, we have also developed a 4-day entrepreneur training course that includes region-specific training in grassroots sales and marketing. As far as we know, no other player in the market has gone to the extent we have to redesign BOTH the product and the distribution channel. This really set us apart from any other player in the market today.” 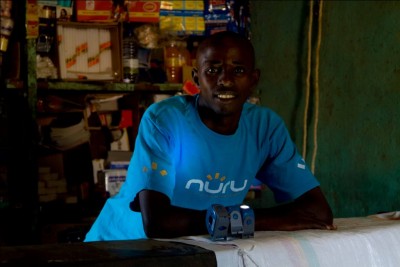 (Above: Martin Uwayezu and his wife Esperance Yanfashije began operations in December, 2010 and have already taken three loans of 50 lights; they also were given 25 free lights as a reward for being one of the entrepreneurs of the year. In total, they have sold 175 lights in just eight months and are looking to take a new loan of 50 lights. Many of their customers are fishermen who use the lights to fish at night. Image credit: John Briggs).

The Nuru Energy team equips local entrepreneurs with a six-month products loan, including a PowerCycle, which enables them to hit the streets and sell Nuru products. By partnering with Urwego Opportunity Bank in Rwanda, Nuru Energy has been able to procure microfinance loans that enable entrepreneurs to obtain the lights and PowerCycle without putting down a personal investment upfront. There’s no doubt this job creation and accessibility have won the company multiple rewards from International Chamber of Commerce, United National Environmental Programm and the World Bank (to name a few) along with recent funding from Meryll Lynch. In September, Nuru Energy will open offices in Uganda and Kenya and plans to close the year with 170 microfranchises in Rwanda alone.

The other element of importance is of course the price of the products: each light costs $6.25, and 17 cents to recharge (for 5 days). Compared to the annual cost of kerosene, this is obvious savings even prior to factoring in the safety and environmental gains.

Be sure to check back in with Nuru’s website next month for exciting updates; I think most readers would agree that there is much good news ahead for any team that includes an Acumen Fund Fellow.