Ghana is rising. It is one of the fastest-growing economies in the world deriving its economic strength from exports such as gold, oil, diamond and cocoa. There is a growing middle class and a significant influx of foreign investment. And earlier this year, the country has announced a project to build Hope City, a $10 billion dollar IT hub, which will be home to Africa’s tallest building and create an estimated 50,000 jobs.

At the same time, Ghana is burdened with major challenges, both socio-economic and political. Electricity, gas and water shortages affect both households and businesses. Excessive power outages and a consequent 12-hour load shedding cause tremendous losses of productivity and increased prices for goods and services. The agriculture sector remains critical for Ghana’s economic development, with smallholder farmers representing about 80 percent of production. However, weak and fragmented value chains have led to reduced investment in agri-based infrastructure and farmers’ productivity is 40 percent below the global average. There is a vivid divide between rich and poor: nearly 50 percent of the population lives on less than 2 dollars a day and only 7 percent of the rural population has access to sanitation facilities. Women’s rights are not being adequately addressed: Hundreds of women in the northern Ghana are accused of witchcraft and condemned to a life of violence, harassment and marginalization, and the representation of women in the parliament is minimal.

Where does Ghana stand today and where is the country headed? How can we bridge the divides in society so everyone will have equal access to opportunities? And finally, who will make this change happen – the change that will impact the future of the underprivileged who have been left to their “fate” for many years?

As part of the search for answers to these questions, we launched the first TEDxOsu event on June 1 in Accra. Our goal was to discuss pressing issues faced by Ghana, to shed light on the opportunities and potential that its people possess, and to collectively envision the country’s future in the next 10 years. 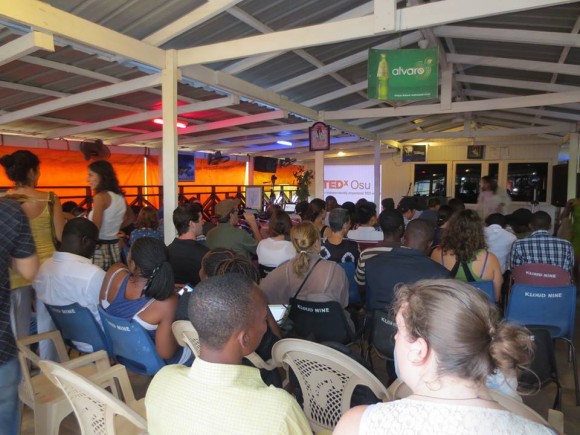 The event brought together thought leaders from across sectors, from an award-winning Ghanaian writer on women rights, to the head of a Ghanaian technology think tank, and an aspiring youth activist. More 150 participants joined us despite the pouring rain, and most stayed until the very end for a round of Q&A with the speakers.

What struck me the most during the event was the power of community. This quote cited in one of the speeches seems fitting: “If you travel alone, you’ll go fast; if we travel together, we’ll go far.” Everyone in the room shared the responsibility of challenging the status quo to make a difference. The most unifying sentiment that day was an increased sense of urgency: a 10-year timeframe is too long for talking about the future of this fast-growing country. The time is now and we have to get started today.

For me, the TEDxOsu event was also a good reminder of Acumen’s new manifesto, especially the concept of moral imagination:

Indeed, talking about existing problems is definitely not enough. Ghana needs leaders who find hope and opportunities when others can only see despair and challenges, who relentlessly pursue what is right, and can listen to voices unheard and help amplify them through action.

The event was well received and many people are asking for the next round of discussions already. To that extent, people need the space for dialogue. We need to keep up the momentum – but at the same time, in conjunction with this sense of urgency, we have to seek a way for us to go the furthest. As one of the speakers suggested: we must travel together. More emphasis should be placed on amplifying the voices of those who have been most impacted by the problems yet continuously neglected and left out of the dialogue. Leading through actions and listening with patience need to go hand in hand. This is one way for us to travel together and to bridge the divide in this society that we have kept expanding, sometimes even without realizing it.

Junko Tashiro is a member of the Acumen Global Fellows’ Class of 2013. She is working with Global Agri-Development Company (GADCO), an agri-food company in Ghana.

Editors note: This article originally appeared on the Acumen Blog.