The mobile financial services sector continued to expand in 2014, boosted by the creation of more enabling regulatory frameworks in several markets. With 255 mobile money services in operation across 89 countries, mobile money services are now available in over 60 percent of developing markets. Today, mobile financial services are firmly established in the financial sectors of the majority of the developing world, serving new business areas and enabling a wider range of digital payments.

2014 in particular saw the achievement of key milestones for the industry:

The industry is getting smarter about what it takes to prompt mobile money adoption: Active mobile money accounts stand at 103 million as of December 2014 (up from 73 million in 2013), and an increasing number of services are reaching scale. Twenty-one services now have more than a million active accounts.

With effective improvements to the quality of agent networks, the mobile money industry is continuing to extend access to financial services beyond the reach of traditional financial institutions. At the end of 2014, there were 2.3 million mobile money outlets globally, 60 percent of which are active. While this figure masks variance across regions, there has been particularly strong progress in West Africa in 2014.

As competition heats up in markets where mobile money is already available, we’re seeing a growing number of mobile network operators (MNOs) showing interest in interoperability. In 2014, MNOs in Pakistan, Sri Lanka and Tanzania interconnected their services to allow their customers to send money directly to mobile wallets on other networks, following in the footsteps of MNOs in Indonesia, where interoperability was implemented in 2013.

In terms of transaction volumes, the fastest growth in 2014 occurred in bulk disbursements, bill payments and merchant payments – reflecting an expanding ecosystem of institutional and business users of mobile money. These transactions represented nearly a quarter (23.1 percent) of all the value processed through mobile money systems globally in December 2014, demonstrating the growing importance of mobile money as a payments channel for goods and services.

Cross-industry partnerships are helping to drive remittances too, both domestically and internationally. The introduction of a new model involving direct wallet-to-wallet cross-border transfers has led to a surge in international remittances via mobile money, and is helping to reduce costs for users. The median cost reported by respondents for sending USD 100 via mobile money is USD 4, less than half the average cost to send money globally via traditional money transfer channels.

For investors, industry partners and stakeholders in the financial services industry, this is good news: Mobile money providers are continuing to invest in improving and expanding their services, showing important commitment to the long-horizon investment required by this industry.

In particular, mobile money providers are investing to strengthen their internal capabilities, with the objective of addressing an increasing number of users and transactions. By June 2014, half of all respondents to the survey had either already migrated their platform or planned to do so within the next 12 months. In addition to technical platforms such as USSD, STK and IVR, over 60 percent of mobile money providers have now made their services available through smartphone apps, providing customers with better customer interfaces and meeting demand from a growing market of smartphone users in the developing world. 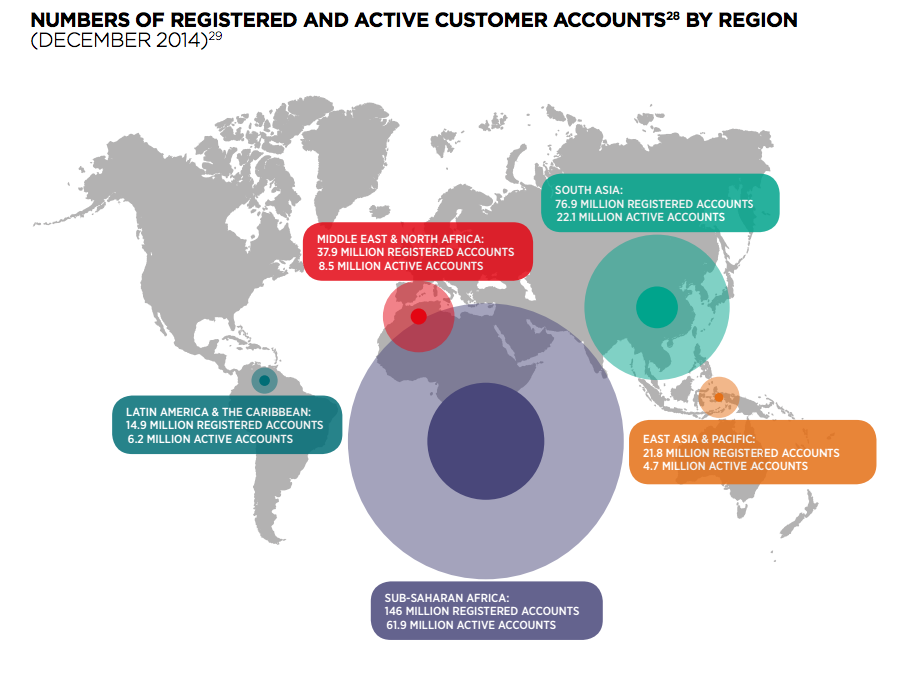 (Above: Figure 7 from the report)

Mobile money continues to transform the way people access financial services: In three-quarters of the markets where mobile money is available, agent outlets outnumber bank branches. Providers are also making efforts to increase the number of users at the bottom of the pyramid and in 2014, the percentage of both rural users and female users increased.

As all of these changes take place within the industry, regulators are increasingly recognising the major role that non-bank providers of mobile money services can play in fostering financial inclusion, and are establishing more enabling regulatory frameworks for the provision of these services. Reforms have been passed in Colombia, India, Kenya and Liberia this year and today, in 47 out of 89 markets where mobile money is available, regulation allows both banks and non-banks to provide mobile money services in a sustainable way.

As the sections in this report reveal, mobile money providers are working hard to increase the quality, reach and sustainability of their services. Through industry-led initiatives, including partnerships with banks and other third parties, providers are enhancing the customer experience and reaching scale to evolve the sector to a new phase of maturity.

The full report is now available for download here. Over the next few weeks, we will be discussing some of the main findings from the report on the MMU blog.

Editor’s note: This post was originally published on the GSMA’s Mobile Money for the Unbanked blog. It is cross-posted with permission.

Claire Scharwatt is the Market Engagement Senior Manager for the Mobile Money for the Unbanked programme, and one of the authors of the 2014 State of the Industry Report on Mobile Financial Services.