Anyone who has read his work or has had the pleasure of speaking with Stuart Hart knows he has some very clear views on what is “green” and what it isn’t. Hart, the Samuel C. Johnson Chair in Sustainable Global Enterprise and Professor of Management Johnson School of Management, Cornell University, also is a member of the NextBillion Advisory Board. Along with Ted London, Hart edited the book, Next Generation Business Strategies for the Base of the Pyramid, and contributed a chapter titled “Taking the Green Leap to the Base of the Pyramid.” I recently spoke with him about what real sustainability means with the BoP.

Stuart Hart: Maybe the best way to illustrate is to say what it’s not. What we’ve mostly been pursuing, which is not a bad thing, is incremental improvement to the current methods of production. And that goes under the banner of what I would call ’eco-efficiency’ or in my terminology … or taking the whatever the current manufacturing process or the current farming technique … and looking to incrementally reduce the negative impact associated with it either by reducing waste, or preventing emissions, or reducing water use or reducing pesticide use, But you’re not fundamentally changing the process or the technique. Eco-efficiency is important, but it’s not going to solve the problem ultimately because of the combination of population growth and economic growth.

So the only way we can think about a world, let’s say 50-100 years from now that isn’t virtually un-livable, is to get to new ways of producing products, of consuming products. I think of those as the next generation. They’re often disruptive, because if they’re successful, they make the current way of doing things obsolete, which is absolutely what needs to happen. That’s what I think about as clean tech.

The ideal is if the very process itself is actually regenerative to natural systems. Producing fiber that actually regenerates the soil rather than depleting it, just for an example. And there are such things out there, where we can actually grow fiber on wasteland and build the soil in the process.

We need to think in regenerative terms and not just reductions in negative impact.

NextBillion.net: In your chapter, you differentiate between ’green sprouts’ and ’green giants’ in building into some of those disruptive changes. How do you define them?

Hart: We’re talking only about those techniques, technologies and processes that get us to what comes next, not incremental improvements. Within that space of what comes next, you can make another distinction between large-scale, centralized kinds of approaches that require large capital investments versus those that – by their inherent nature have the potential to be done on a smaller scale on a distributed basis – maybe even all the way down to a household scale.

And I call the first one “green giant.” Think of big wind, or centralized water treatment plants for drinking water, windmills with the blades the size of football fields … those are green giant, centralized clean technologies. As opposed to the more distributed approaches that might be point-of-use water treatment, distributed generation of renewable energy, whether it’s small scale solar or wind, local production of bio materials, sustainable agricultural practices … all of which can be done all the way down to the single plot of land or the household scale, or “green sprouts.”

NextBillion.net: It seems like the overlap, that is, a local solution that taps into a broader network is where you want to be working at or with the base of the pyramid.

Hart: When people think about localized, or small-scale or de-centralized solutions, the mind typically wanders to the way that’s been done historically, and that’s been through NGOs by enlarge … The imagery then is something that’s small scale and local, and stays local. … Here clearly we need to engage the local communities in the co-creation on whatever it is that comes about, but there’s also the intention of how to scale this much more broadly from local level to local level. That’s really what I think the enterprise-based model – the corporate model, if you will – really brings, is the desire and the bias to really take this to scale on a global basis.

If we’re going to transform over the next 30-40-50 years to a world that has a chance of actually being sustainable, then these new ways have to scale and grow at an incredible rate over the next couple of decades. In the old days, the rhetoric was the no growth movement, that is, the way we have an environmentally sustainable world is we have a no-growth economy. … I think exactly the opposite. What we need is growth on a scale that we can’t yet imagine, but it needs to be a different kind of growth. It’s a little bit like nature. Nature is always growing, if it’s not, then it’s not alive. But in order for something to grow and flourish, something else has to die, because that is the food for what is growing. And I think the same thing is true here, this is a process of creative destruction. These are new enterprises that I would think of as green leap … they need to become explosively successful by the thousands and ultimately put the old way out of business.

NextBillion.net: So what is an example of co-creation toward a green leap venture?

Hart: One of the things I talk about in my chapter is this startup company, The Water Initiative that I’m involved in personally. … We began with a premise that this has to be done with people in the local community in a way that respects local culture and traditions, but also understands in a deep way what the water chemistry and water problems are in that place and co-creates a business model that includes more than just taking impurities out of water, but rather a business that people in the community can grab a hold of and pull in.

So with The Water Initiative, we started in northern Mexico, the big water problems are arsenic and fluoride contamination, less the issue of germs and pathogens because the Mexican government through centralized treatment already was over-chlorinating water. People didn’t trust the water because sometimes the government would forget (to treat it) but they also hated the way the water tasted because it had all this chlorine in it, so they typically wouldn’t buy or drink government water. 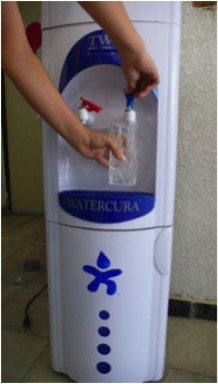 We started in a city called Torreon, where local people would buy bottled water for drinking … and the problem is, while it tastes better, it’s bloody expensive. The jug water is more affordable, but there’s no guarantee of its purity – a lot of that water had arsenic in it because it was sourced locally.

Conagua, which is the Mexican national water agency, has viewed us as a real ally. We presented a potential solution that could be accomplished through enterprise in a way that required no real public investment at all. If it works, then it could solve the arsenic and fluoride problem without massive public investment. … By the way, local people know there’s arsenic in the water, but you can’t taste it you can’t smell it you can’t see it. To construct a business around arsenic removal wouldn’t work. So the only way to do it is to work with people in the community to co-develop a business concept that has real value from their point of view. A big part of that is to have something in the home where they can have fresh, good tasting, healthy water, but to do that you have to get the chlorine out, which (the device) does. People wanted something cool that they could have in their living room they could show off to show that they were serious about having healthy water and have a decal on their window. So they really helped us develop this device called the WATERCURA, which people literally have in their living rooms. It removes the excess chlorine from their water. It’s zero energy – the whole thing operates just by gravity feeds so it’s a green leap technology, compared to (energy intensive) reverse osmosis treatment.

People also were interested in having cool water … so we have the WATERCURA option of chilling the water, which does use some energy, but it’s hugely valued from local peoples’ point of view. Oh and by the way, it also takes the arsenic and the fluoride out of the water, but that’s almost as a side note. Plus, (local customers) have started complimentary businesses, which they’ve helped to design using the TWA healthy water to make soups, salsas, fresh fruit drinks, which they then go and sell to the community. It provides additional revenue generating opportunities for them, but they’re also business partners for TWI selling, servicing and installing these devices as well.

So it was done through a co-creation process from the start, which then creates some community pull, rather than just going door to door hawking some arsenic filter, which doesn’t work. That way of thinking is critical if we’re going to get to a point where these next-generation technologies really become embedded in, accepted by and woven into the lives in these communities.