How ‘farmerbook’ Brings Transparency and Networking to the BoP

The new ‘farmerbook,’ an initiative from Digital Green, aims to bring transparency and networking to rural India, by allowing users to see how best practices in farming promoted by Digital Green are shared and adapted.

Farmerbook is an online platform that displays farmers and service providers reached by the Digital Green initiative. Started as a Microsoft research project in 2006, Digital Green has since then become independent. They produce and screen videos on hands-on agricultural best-practice in rural India – a total of over 2,300 videos so far, that have reached more than 100,000 farmers. Videos are produced in the villages with local farmers, in their local dresses, in their local language and dialect – increasing both credibility of the message and giving a strong statement of empowerment.

And while the practices are simple and practical – mixing lime with drinking water for cows, for example – the impacts can be quite significant.

(Below is a sample video on “lime water feeding,” in Kannada, a local language of the state of Karnataka).

What is it for?

Farmerbook gives Digital Green another edge for its online outreach. The transparency of the initiative has been impressive, even before launching Farmerbook. For instance, you can browse their video library of agricultural best practices, where you will find videos in a series of local Indian languages you might have never encountered. As Digital Green is quite data-driven, it also has an online display of analytical data, including the numbers of farmers participating and adoption rates for the proposed measures (standing at 51.5 percent overall). The site even provides the screening numbers and adoption rates per video (see an example).

Digital Green takes this transparency to a new level by featuring their individual outreach workers (called “service providers”) as well as selected rural farmers. It shows which videos the farmer has viewed, which measures he or she has expressed his interest in, and which he or she has adopted. 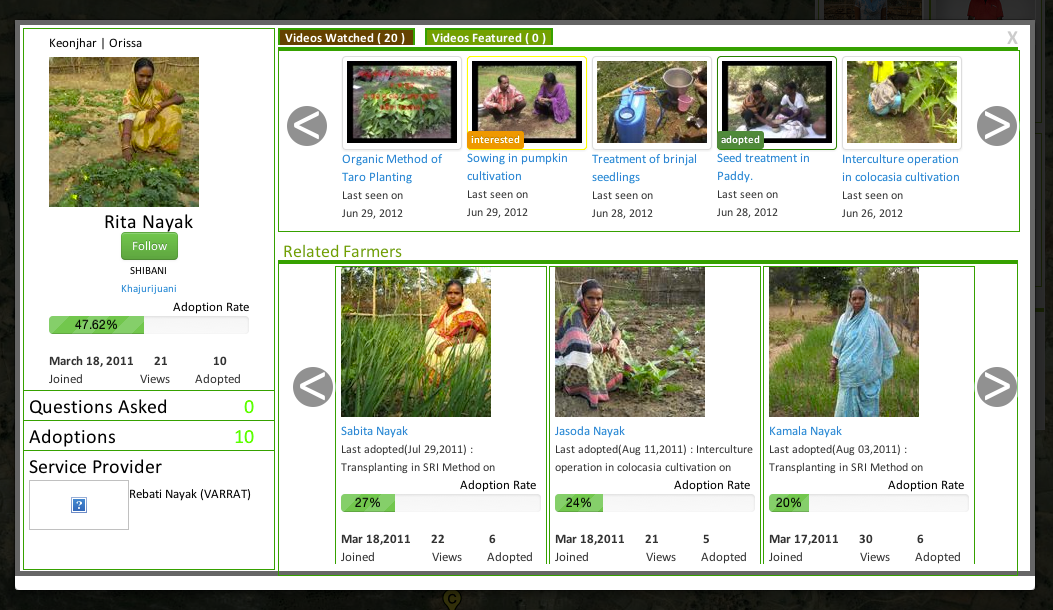 Why does it matter?

Farmerbook is a quiet revolution, as it breaks down the barrier between the connected and the unconnected. Producing online content is still a rich-country affair. Some initiatives try to break through this barrier, but the borrower profiles on platforms like Kiva.org are written by local intermediaries or even Western volunteers.

By providing profiles and data on video views and adaptation numbers, farmerbook breaks down this barrier. The profiles created could well be the start of more serious online network (for example, if these became accessible via mobile platforms). They could also be linked to mobile trade platforms or innovative forms of rural (micro-)finance.

While poor rural, particularly women, farmers may not have a credit score, through Farmerbook, they now can obtain an “adoption score.” This is both cheaper (actually, profitable) and a potentially more valuable indicator. An innovation that could even move upmarket, to replace the broken approach to small business credit in the West!