One evening, as the monsoon rains twisted the complex tangle of traffic during the daily commute to Salt Lake City, the hub of Kolkata, India’s, small but growing tech sector, Radha Basu turned to her husband Dipak and asked: “Are you changing the world now?”

I was a passenger on many of these daily drives with Radha and Dipak, the CEOs of iMerit and Anudip, respectively. Radha’s question was not a rhetorical one, but an exercise in perspective following a very long day’s work. Looking back, I’ve gained similar perspective on how these two former Silicon Valley IT leaders run a burgeoning technology-driven enterprise in a city rated the “most difficult” to do business in India while nurturing a social mission.

Developing and employing IT talent in unlikely places

As part of my summer internship managed by the William Davidson Institute (the parent organization of NextBillion), I had been in Kolkata since early June working with iMerit, which employs people from marginalized and rural populations to work in tech jobs. At the heart of iMerit’s business model is its partnership with sister organization Anudip, which has provided training to more than 25,000 youth in east India since its inception in 2007. Anudip develops a pipeline of talented young people from areas with traditionally low levels of education and limited access to jobs in India’s growing business and IT industries. The two companies are feeding a growing sector, known widely as impact sourcing.

As a former Peace Corps volunteer and management consultant, my past work experiences ranged from training entrepreneurs in rural Africa to project management on large-scale consulting engagements. Combining these two experiences, my objectives for my MBA internship were to experience social business from an operational perspective and to learn from a strong management team committed to driving social change. Radha and Dipak certainly fit the bill. Both come from very successful careers as technology executives; Radha with Hewlett Packard and then launching startup Support.com, and Dipak with Cisco and then as a founder of the humanitarian IT network NetHope. Radha and Dipak started iMerit in 2012 as an entity to employ the highly talented graduates coming out of Anudip’s training programs, and iMerit has grown rapidly ever since.

I was first connected to Radha, a tremendously inspirational female leader, at the WDI Base of the Pyramid (BoP) Summit in Ann Arbor in October, where she shared the moving story of iMerit’s Metiabruz center. Metiabruz is a conservative Muslim port town south of Kolkata with a population of 700,000. iMerit employs 125 young women there and remains the only IT services employer. Metiabruz is one of five delivery centers in iMerit’s rapidly expanding network, strategically placed in outlying locations where workers from rural areas are not forced to uproot for a tech job.

Launching the next generation of tech leaders 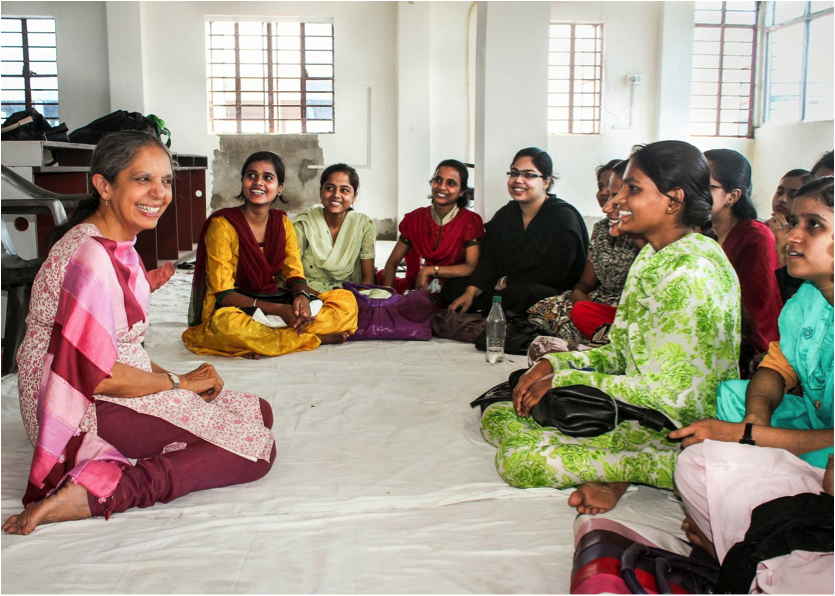 Together, the two organizations now employ more than 600 people and continue to grow. The company has the feel of a close-knit family that challenges and supports one another. Some of iMerit’s early employees such as Barnali Paik have transitioned from Anudip students into iMerit managerial roles, and are now tasked with developing junior staff while ensuring iMerit delivers top-notch work for its growing list of high-profile clients.

During my time at iMerit, I’ve been struck by the basic idea that long-term investments in people are core to the business model and to the mutual benefit of the company, employees and communities in which iMerit operates. iMerit’s approach to human capital development was explained to me by Chief Delivery and Development Officer Anindya Chattopadhyay, who sees his most important role as developing rising talent in the organization.

According to Chattopadhyay, iMerit’s approach as a social business is to focus on training and developing people in a supportive environment with high standards of quality and professionalism. The ability to identify potential in a junior employee and the patience to see him or her through mistakes, learning and growth is iMerit’s business and social differentiator. The result is both the “upskilling” of the individual’s abilities and the expansion of iMerit’s delivery capabilities.

Addressing the IT skills gap

In many BoP markets, there is a gap between the talent requirements of employers and the skills of candidates in the job market. Half of India’s 1.2 billion people are under age 25, yet only a privileged few will complete advanced studies and be considered employable by the IT sector.

According to India’s National Association of Software and Services Companies (NASSCOM), of the 3.7 million annual graduates from Indian universities, only 25 percent are employable by the IT sector, presenting a challenge not only to job candidates, but also to companies looking to hire them. I researched this looming talent gap with Accenture and the Brookings Institute, which both conclude that the lack of qualified candidates will limit growth in the private sector among companies that must increasingly compete for talent.

This critical skills gap is precisely where iMerit and Anudip operate. Betting long on the youth of West Bengal and India seems to be the best business risk that iMerit could take. I’m gratified that I was a part of the journey with Radha, Dipak and the iMerit team.

Carrie Wolfe is an MBA student at the University of Michigan Ross School of Business, where she serves as the Director of Operations of the Social Venture Fund.