What’s the Point of Investing in Financial Inclusion? A New Review Aims to Help Investors Maximize Their Impact

The mid-20th century development consensus assumed not only the foundational importance of financial systems, but also that financial systems would function as a flywheel: In other words, once the basics of a stable and well-functioning financial system were set-up, the financial system would broaden and deepen to serve whatever domestic capital needs arose. But by the 1980s, these assumptions were becoming increasingly threadbare. Investments and subsidies targeted at the financial system or banks were not creating the flywheel effect, and large portions of developing economies were still starved of capital and financial services.

When the microfinance revolution took hold, it emphasized the value of access to financial services for everyone. But the focus of investment and subsidy in financial systems shifted from the macro to the micro. Despite the change in focus, the basic logic was the same. Investment in financial services for the poor would generate a flywheel effect, reducing poverty as more and more customers gained access to credit and used it productively. Over time, subsidy would become less necessary as institutions became self-sustaining, and larger banks learned the value and profitability of serving lower-income customers and firms.

Yet over the last 10 years, questions about the impact of financial services investments arose again. Most of the (often unspoken) theory of change behind microfinance was clearly not being realized. Poverty was not vanishing. Despite the success of MFIs, larger banks were not moving to serve poorer customers or lending outside of their comfort zones (Telecom firms and fintech are a different story, however, bringing a different set of questions about consumer protection). The vast majority of small firms still lacked access to capital and financial services, caught between being too big for microcredit but too small (and often too informal) for commercial banks.

This historical perspective is the context in which CDC (the UK’s development finance institution)—and FAI (a research center housed at NYU-Wagner focused on financial services for low-income households) together set out to review the theory and empirical evidence for investing in financial systems as a development strategy.

Specifically, we were interested in trying to better understand:

To be clear, the purpose of this effort from the beginning was not just to aggregate the results of recent impact evaluations, but to take several steps back and review the whole picture: theory, history, and empirical evidence from macro and micro studies. It was specifically not a “systematic review” (you can read Tim’s thoughts on the benefits and limitations of systematic reviews here). Rather, it was an attempt to build an understanding based on a very broad review of research of all kinds that would help answer policy and strategy questions about whether, why, where and how to invest in financial systems, in order to make a lasting difference in people’s lives.

Over the last nine months, we’ve been diving deep in the research, (current and historical, micro and macro), engaging with researchers and other thought leaders in the space, and trying to make sense of the puzzles of financial systems development and growth.

We’re happy to announce the publication of the first output of that work, an Insight review. The goal of CDC’s Insights is to guide busy impact investors through the relevant evidence, positive and negative, and provide actionable insight among a cacophony of voices.[i] 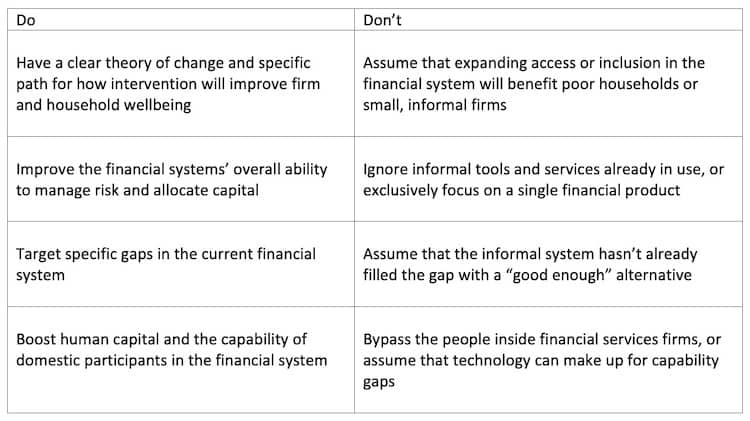 This review is supporting CDC in how it should and could approach investing for impact in its markets. We hope it is similarly useful to other organizations that are focused on reducing poverty via investment in financial systems and services, and a useful complement to other recent efforts to document the evidence on various financial systems and services interventions. And we are very interested in feedback, so feel free to reach out.

[i] Later this summer, CDC and FAI will publish a more comprehensive “long read” based on the complete research review we undertook.

Timothy Ogden is Managing Director of the Financial Access Initiative at NYU-Wagner.

Machal Karim is a development impact specialist at CDC Group.