According to World Food Program research, 194.4 million Indians were undernourished in 2019. The non-profit Akshaya Patra is tackling this problem by running the world’s largest non-government school lunch program, feeding upwards of 1.8 million children every day. It is arguably India’s most respected – and best-funded – large-scale non-profit.

But the reality is that it’s nowhere near well-funded enough. From the U.S. to Kenya, non-profits around the world have substantially higher annual budgets than Akshaya Patra. In fact, BRAC, an international development organisation based in Bangladesh, deploys an annual budget (combining donations and revenue) that’s almost 13 times greater than Akshaya Patra’s – only in Bangladesh.

The Akshaya Patra story is an example of an endemic problem facing India’s non-profits. It is estimated that India’s non-profit sector only received private funding of $9.3 billion in FY18, including funding from individual philanthropists (63%), domestic corporations (16%) and foreign sources (19%). This is a matter of concern given the fact that India needs an additional $60 billion annually to achieve even five of the 17 Sustainable Development Goals set by the United Nations – a significant portion of the estimated $250 billion annually needed for all developing countries to meet every SDG.

While most non-profits try their best to disclose what they can, there is considerable disclosure variability. India has minimum financial reporting requirements – currently, all Indian non-profits (including trusts, societies and Section 8 not-for-profit companies) must file annual tax returns and financial account statements, but many non-profits don’t even file every year. And even if they are filed regularly, these disclosures make no mention of impact, governance, strategy or any information that funders can use to decide which organisations to support – exactly the kind of information that would increase trust.

It’s important to note that non-profits are not shying away from transparency. A majority of the 215 Indian non-profits surveyed by The/Nudge Centre for Social Innovation reported that they wanted greater transparency – along with rewards for outcomes. But with no standard disclosure formats, there’s a lack of clarity on what non-profits should disclose, and with what frequency. In the same survey, a majority of respondents issued a call for straightforward reporting standards.

We (speaking as individuals, not necessarily on behalf of Omidyar Network) argue that a promising approach to increasing trust is to develop and drive the adoption of simple yet robust non-profit disclosure standards. Standards like these will lead to additional transparency, drive system-wide trust and give donors a consistent framework to make funding decisions, leading to more capital and talent flowing into the sector.

We believe that a standardized disclosure-based approach needs to answer three fundamental questions that investors and donors at every level want to know as they do their due diligence on potential non-profit organisations to fund:

In designing these standards, we have sought to balance rigour and practicality: They are designed to be robust, without imposing an excessive reporting burden on non-profits.

From the ‘What’ to the ‘How’ – A Scorecard Approach

So how does one translate the three questions above into a practical usable framework? We use the three themes of the widely cited UNDP SDG Impact Practice Standards as a starting point to create a “scorecard.” We outline the elements of our framework below.

Here we propose that the organisation articulate a summary of its strategy.

Here we propose that the organisation certify that it is conforming to some basic standards of governance and financial accounting, and that it disclose this information in a public report. 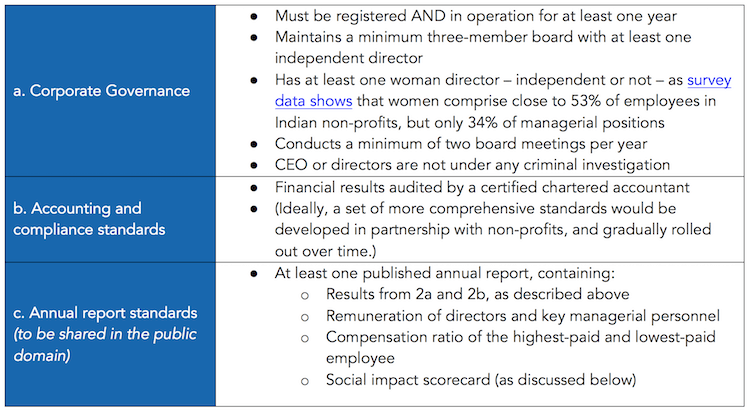 Here we propose that the organisation include in its annual report the type of impact it is creating along three parameters of reach, depth and inclusion. (We recognise that the “impact” captured here essentially consists of output and outcome metrics, but we feel that this is acceptable as a starting point. We have found that it’s possible to get to an estimate of depth and inclusion through a simple, short survey with the beneficiaries and customers of the organisation. We recommend a minimum sample size of 1% of the customers, or at least 200 respondents per organisation.) 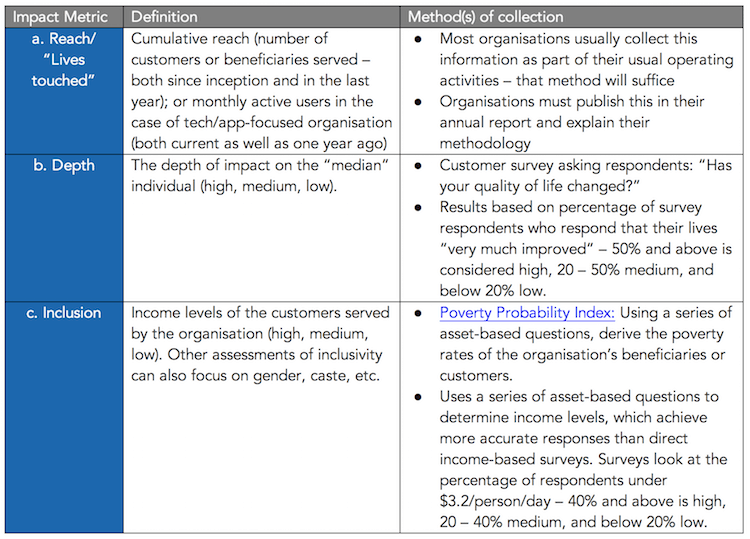 A Long Road – But a Necessary One

We believe that it is time for governments, investors, funders and non-profit organisations to get started on boosting the sector’s transparency. Although there are many possible routes forward, we believe that a significant collaborative effort is needed. It should be led by a coalition of the largest non-profits and funders, as well as a government entity. In India, the proposed Social Stock Exchange could take the lead. This coalition should align on these financial and impact disclosure norms, and target adoption by a critical mass of non-profits and funders. The leadership of this coalition, with government and private sector involvement, will help build broader alignment and buy-in throughout the sector, and ensure success. Although we don’t propose making these standards mandatory, having a credible collective entity encouraging them would drive adoption.

We recognize that this standards-based scorecard approach has limitations. This framework works best for organisations that seek to serve end-customers and beneficiaries directly. Organisations that are focused on achieving “sector-change” (something we at Omidyar Network India also actively look to invest in) may not be able to deploy this easily. For such organisations, other metrics – like policy impact created, capital crowded in, imitators spawned, etc. – may be more relevant. We outline our organisation’s thinking on this here.

There are other open questions. Will these standards disproportionately benefit larger non-profits which have the capacity and resources to undertake annual assessments? Will they make organisations too “metric-driven,” focused on gaming the systems/metrics rather than on making a real impact? How would we ensure that the disclosures are high-quality? Might we end up missing other, more nuanced aspects of impact?

These are all legitimate questions which will provide rich fodder for discussion on the path forward. Our objective here is to put out a practical way to get started – we can learn and adapt our approaches as we go along. The sooner we start, the sooner we can build a vibrant, trustworthy funding ecosystem that can create several non-profit unicorns, grow the non-profit sector, and help fast-track India’s journey to achieving the SDGs.

Varad Pande is an investment partner and Rahul Bhide is a consultant on the Strategy & Impact team at Omidyar Network India.