New NB Roles for Lall and Kendall, the Best of April ’Deviants’ and All

Last Friday and on Monday, we announced several changes to the NextBillion team. In fact, with Francisco Noguera moving to the role of staff writer and a host of new scribes coming on board, there was almost too much NB news for one post. So, I’d like to take a few graphs to make a few additional editorial announcements.

We’re happy to (re)introduce Saurabh Lall, a current NB staff writer, who will be signing on as one of our editors. He joins the team of Nilima Achwal, Kevin Keeper and Kishor Nagula. If you’re interested in clean technology adoption at the BoP, you’ve probably read Saurabh’s work. He is a research officer with the New Ventures objective of the Markets and Enterprise Program. Saurabh’s research focuses on the investment potential of SMEs to deliver positive impacts on the environment and society, with particular focus on market-based sustainable solutions for the needs of low-income groups, clean energy, energy efficiency and water. He is co-author of two WRI reports: “Power to the People: Investing in Clean Energy for the Base of the Pyramid in India” and “Powering Up:The Investment Potential of Energy Service Companies in India.” Originally from Mumbai, Saurabh has previously worked on rural water and sanitation issues in several states across India. He has a Master of Public Policy degree from George Washington University and a Bachelor of Engineering degree from the University of Mumbai. He is currently pursuing a PhD in Public Policy and Administration at the George Washington University, focusing on social entrepreneurship and program evaluation. 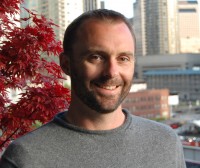 I’m also happy to announce that Jake Kendall, a program officer in the Financial Services for the Poor initiative at the Bill & Melinda Gates Foundation, is moving from guest writer to staff writer. Jake manages the research strategy of FSP, including managing FSP’s major research grants and engaging with the researcher community. Before he joined the Foundation, Jake was a researcher with the Consultative Group to Assist the Poor (CGAP) housed in the World Bank. Jake holds a PhD in Economics from UC Santa Cruz and a BS in Physics from MIT. Just after graduating from MIT he volunteered for two years in Zambia as a fisheries extension agent with the US Peace Corps. Jake has also worked as a brand analyst for a major advertising firm, a technical salesperson for two high tech start-ups, and, throughout his youth, was a salmon fisherman in Alaska. If you haven’t read Jake’s posts on mobile money, you’re missing out.

Best of April – ’Deviants’ and All

Seeking Innovation? Search Out the Deviants by Grant Tudor dug into the question of “positive deviants” or those people who demonstrate uncommon, but wildly successful behaviors. These are the people, in every culture and every sector, who find a way to be successful amid stressed resources. They’re also the individuals developers and entrepreneurs should pay attention to and emulate.

Overcoming Gender Bias In Mobile Money by Bryan Farris was the first of several interviews with Mary Ellen Iskenderian, president and CEO of Women’s World Banking. Iskenderian explained that mobile money, while an incredibly expansive tool for financial access, also can be a cultural inhibitor for women who often do not have access to the household cell phone – frequently the property of their husbands.

Unleash Social Impact: Ashoka’s Globalizer and Skoll World Forum by Nilima Achwal includes an interview with Felix Oldenburg, Ashoka’s Europe and Germany director, and a speaker at the Skoll World Forum. He, along with Konstanze Frischen and Maria Zapata, organized Ashoka’s first-annual Globalizer program that accelerated Ashoka Fellow enterprises and is challenging the mainstream dialogue on social enterprise.

Friday Roundup 4/15/11: New Books Dive into “Poor Economics” and Prosperity in BoP Markets by Francisco Noguera previewed two important books. The first, Poor Economics, by Esther Duflo and Abhijit Banerjee, draws from the authors’ experience and the data gathered by MIT’s J-PAL. Poor Economics summarizes conclusions and ideas that emerge from looking at development through the lens of randomized control trials (RCTs). Check out Francisco’s primer, then head over to the Wall Street Journal for a must-read review here. The second book was Eric Kacou’s Entrepreneurial Solutions for Prosperity in BoP Markets. Similar to Duflo and J-PAL, Kacou looks at the choices and mindsets that are underlying to the success and failure of enterprise solutions to poverty challenges. Eric, of course, signed on as a staff writer for NextBillion this week.

Disruptive Innovation In Service of Social Business Growth (Part 2) by Carolina de Andrade was an excellent contribution from our sister site, NextBillion Brasil. In her first article, Carolina aligned and demystified the concept of disruptive innovation and its lessons. This second article goes deeper by exploring two examples – KickStart, an irrigation pump maker; and Asembis, which manages a network of low-cost urban clinics in Costa Rica – both of which offer some practical lessons for market diffusion.